Offaly man one of 107 graduates from Civil Defence College 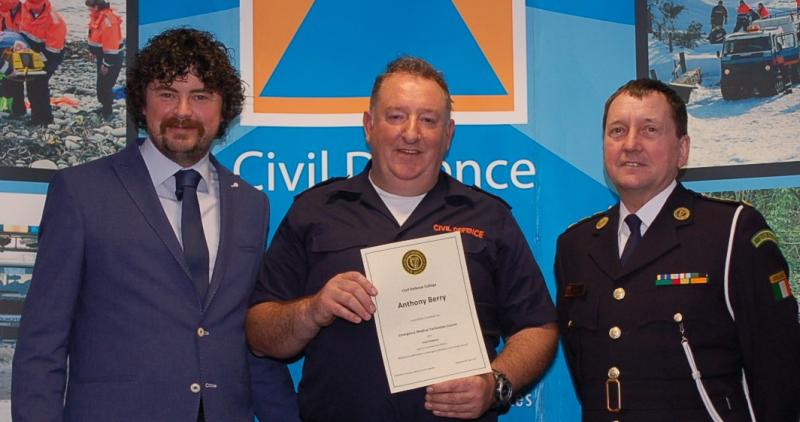 Long-time member of Offaly Civil Defence Anthony Berry from Ferbane was one of 107 graduates who attended a ceremony held in Civil Defence College Roscrea on Wednesday, April 26.

In addition to QQI Voluntary Sector Training Skills, Manual and People Handling Awards the event included 71 graduates from the PHECC Emergency Medical Technician Programme which is a pre-hospital care award.

College Principal Róisín McGuire, opening the event, welcomed all and marvelled at their individual achievements. It was, she said, “hard enough to find enough time in our lives for work and family without the added challenge of participating on these intensive educational programmes”.  The participant’s commitment was a sure sign that “volunteerism is alive and active in each community” noting that graduates from over seventeen different counties were present at the event.

Stephen Hall, Branch Head of Civil Defence spoke of Minister Paul Kehoe’s wonderment at the willingness of Civil Defence Volunteers to give over their time to training, participating at community events and responding to emergency events. The Minister had been particularly impressed at the recent Regional Civil Defence Competition hosted in Tara Mines in Co. Meath. Stephen thanked all who had been involved in organising and delivering the programmes to such a high standard; a fact confirmed by the presence of so many graduates from other organisations.

Civil Defence Officer Chairperson, Anthony Graham, spoke on behalf of his colleagues when he emphasised the importance that graduates keep their level of training up to the required standard and not to stop learning. He concluded with his thanks to Civil Defence College for all their hard work in preparing graduates for their various examinations.

Vice Admiral Mellet sent his best wishes to all and in particular the thirteen members of the Defence Forces who were graduating at the event. Col. Brian White, speaking on the Admirals behalf, said it was a great honour to have so many members complete the Emergency Medical Technician programme adding their knowledge and skill were a key component of the Defence Forces capability.

Tim O’Halloran of Tipperary Civil Defence asked to speak on behalf of graduates. He thanked all who were involved in the programmes and the level of education. Tim commented that it was a challenging learning experience for all however worth it. It, he said, shows you are never too old to learn.

The event concluded with a special mention of graduates Thomas Durney and Catherine Flynn from Waterford Civil Defence who were getting married the following day!