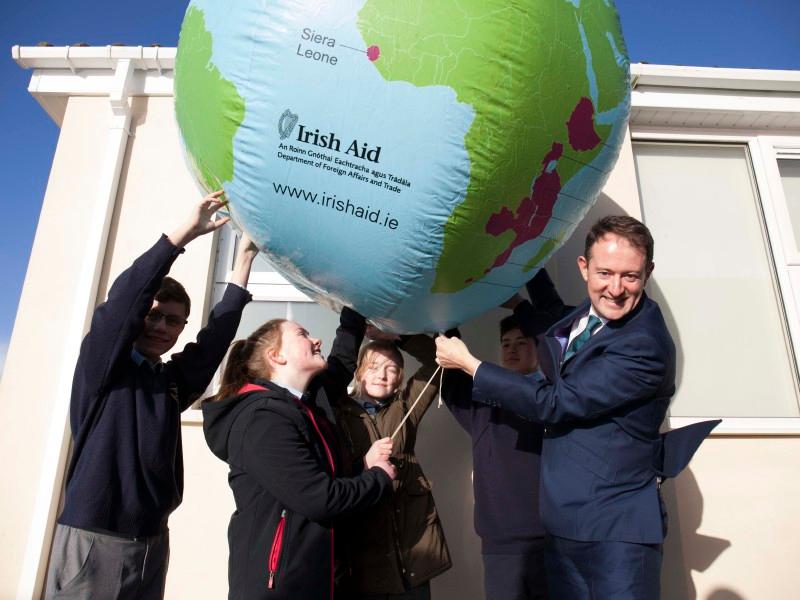 The Minister for Development, Trade Promotion and North South Cooperation, Seán Sherlock T.D., is calling on all Offaly primary school pupils from 3rd to 6th class to take part in the 2016 Our World Irish Aid Awards and imagine what our world might look like in 2030

Through the Awards, pupils learn about the lives of children in developing countries and the work of Irish Aid, the Government’s programme for overseas development. Pupils then create projects to highlight the challenges facing poor communities in developing countries, and the progress being achieved by Ireland and other countries in the global effort to fight poverty.

Offaly was well represented at the 2015 Awards, with St. Cronan's N.S. and S.N. Naomh Eoin making it to the regional finals.

The theme of the 2016 Awards, ‘One World, One Future’, asks pupils to imagine how their world might look in 2030, and enables them to learn about the new United Nations Global Goals for Sustainable Development, which seek to address the root causes of poverty worldwide.

Calling on all Offaly primary schools to get involved, Minister Sherlock said: “The Our World Irish Aid Awards give pupils from all over Offaly a great opportunity to gain insight into the lives of children in the developing world and convey their understanding through projects which are both creative and educational. “This year pupils will learn about the United Nations Sustainable Development Goals which were agreed upon in September 2015. The Goals are aimed at eradicating poverty, addressing environmental degradation and climate change, and building a more peaceful, fair and sustainable world. “The Global Goals offer an ambitious framework to tackle the most pressing social, economic and environmental problems facing the world today. It is so important that pupils in Ireland today learn about these Goals which are so vital for the creation of a better world and a better future for all.

“I encourage all Offaly schools to get involved in this great programme.”

All entries are assessed on their creativity, understanding of the theme, and their impact. Projects that illustrate strengths across these three areas will receive an ‘Our World Irish Aid Award’ plaque at regional awards ceremonies in May, and the 12 top entries will win a place at the final awards ceremony in June, where they will receive trophies, with one outstanding project winning the overall ‘Our World Irish Aid Awards’ trophy.

The inaugural Our World Irish Aid Awards Teacher of the Year Award will also be introduced this year, where one teacher will be recognised for their outstanding contribution to the Awards and be invited to act as an ambassador for the Awards for the 2016-2017 programme.

Over 1,000 primary schools throughout Ireland participated in the Our World Irish Aid Awards in 2015. Registration for the 2016 Awards programme is now open and the deadline for entries is Friday, March 11.For more information on how to take part please visit: http://ourworldirishaidawards.ie/