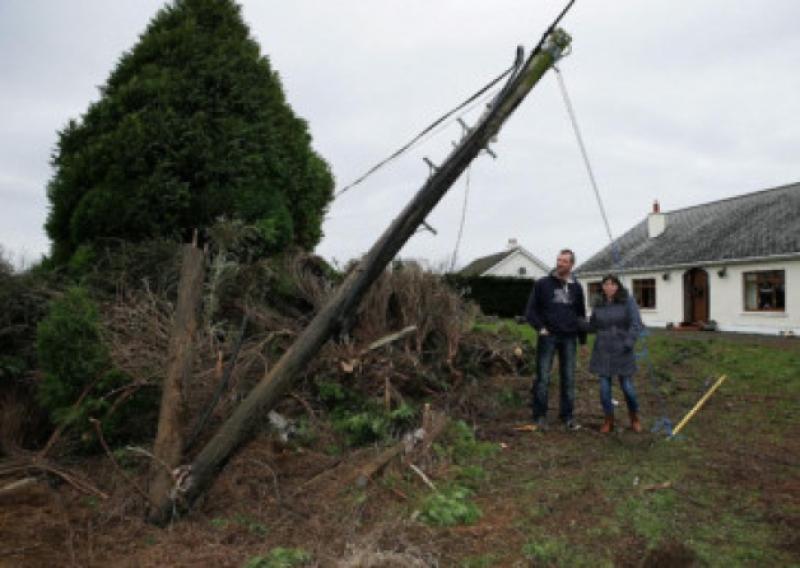 A Portarlington family are in shock this week after an articulated lorry crashed onto their property on Saturday and narrowly avoided careening into their home.

A Portarlington family are in shock this week after an articulated lorry crashed onto their property on Saturday and narrowly avoided careening into their home.

Rosaleen O’Kane said her whole family could have been wiped out, when the 40ft lorry left the road at Kilmullen and ploughed straight through their front garden, missing the family home by no more than two or three feet.

“I was in Newbridge shopping with my two daughters and was literally just coming home when I saw blue lights at the gate, which gave me an awful fright. The lorry looked as if it had dropped out of the sky. I nearly died,” she said.

Ms O’Kane’s husband, Niall Kavanagh was home at the time, with the couple’s 11-year-old son. They were just about to go out to the garden to set up fencing for a puppy dog when the lorry jackknifed and left the road. Ms O’Kane revealed that her husband saw the driver of the lorry standing up in the cab trying to gain control of the vehicle as it crashed into the front garden. She said she believes the efforts of the driver managed to save the house, however there was extensive damage caused to the curtilage of the property, with the fence and lawn destroyed and oil spilled everywhere.

Trees that were planted 23 years ago by Ms O’Kane’s late father were also destroyed, while her son’s toy sit-on tractor was squashed beneath the wheels.

“There have been loads of accidents on this road, lots of single car collisions with cars going into the ditch,” she said. “Laois County Council need to get their fingers out and invest in safety.”

Ms O’Kane said that she has contacted Laois County Council on numerous occasions concerning the safety of the road and local residents have formed a group as they fear someone will be killed. However, she claimed the council have only carried out “small patch-up jobs” and an assessment of the full road is needed.

“4,700 cars go past here every day. Do we want someone killed before something is done?” she asked.

When contacted by the Leinster Express, senior executive engineer with Laois County Council, Paraic Joyce acknowledged there are problems on the road and said the council have applied for funding to carry out works.