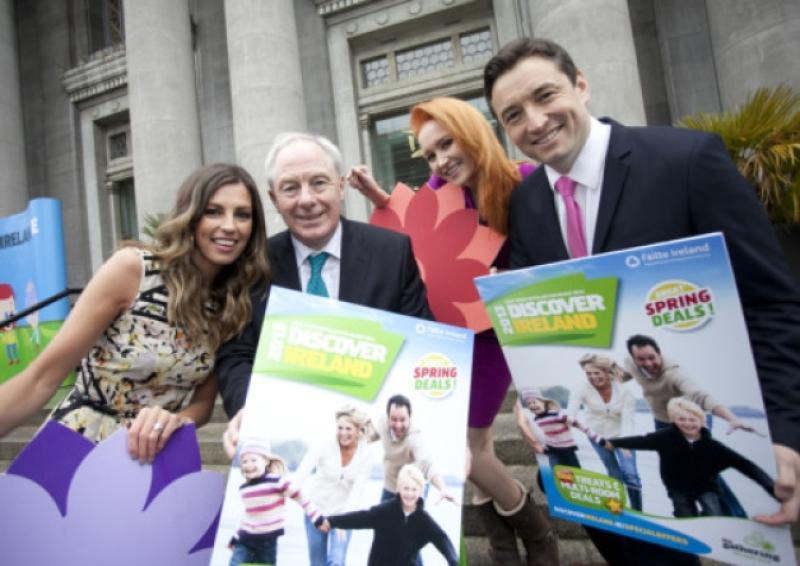 Offaly will be a natural beneficiary if Irish people continue to take more breaks at home.

Offaly will be a natural beneficiary if Irish people continue to take more breaks at home.

That’s according to Minister of State for Tourism Michael Ring TD who launched Fáilte Ireland’s new home holiday campaign in Dublin. The campaign emphasises the great variety of festivals and events taking place both in Offaly and around the country during 2013, the year of ‘The Gathering’. The new home holiday campaign incorporates an animated series of TV ads, radio and print promotion. The national tourism development agency also rolled out a revamped and upgraded Discover Ireland App to accompany a new initiative providing free Wi-Fi in tourist information offices around the country.

The new animated television adverts (click here to view) will be going live on Monday 11th March while a new Spring Special Offers brochure will be included in national newspapers on 16th and 17th March as well as being available in all tourist offices across the country.

Speaking today Minister of State for Tourism Michael Ring T.D. said, “With visitors from all over the world coming to Ireland this year for The Gathering, there’s every reason for Irish people themselves to stay around and join in with the festivities.

“Over the last few years, the tourism sector has served up improved value while maintaining great quality. So, if Irish people are after good fun and great value, I will be telling them to check out all that’s available through the ‘Discover Ireland’ brochures, website or new smartphone app and to plan a break in Offaly now.”

Last year, in 2012, Irish people took an estimated 8.9 million domestic trips generating estimated economic activity of €1.7 billion. The latest Fáilte Ireland research shows that almost six out of ten (57%) Irish people plan to take at least one break in Ireland this year which remains at the high water mark for the home holiday market.

Research also indicates that satisfaction levels for Irish people with their breaks at home remain extremely high – 77% were very satisfied with their last Irish break (compared with levels of 63% just 3 years ago) with a further 21% adding that they were fairly satisfied.

At the launch, John Concannon Director of Marketing with Fáilte Ireland emphasised that the home holiday market still remains central to the performance of the tourism sector and is still in robust good shape.

“It’s all about the two big ‘V’s – variety and value. Current satisfaction rates are an improvement on the levels seen throughout the boom and are an indication that more and more Irish people are finding good value at home to accompany the greater variety of festivals, events and activities which are on tap all year round.”

To enhance the experience of all those who holiday at home this year, Fáilte Ireland launched its new revamped Discover Ireland app. John Concannon explained:

“Now with just the tap of a screen, you can see what’s going on all over Ireland. Whether you are a tourist or a local, you’ll love our Discover Ireland app which gives you up-to-date useful info on what’s happening, where to stay and more, no matter where you are.”

Providing an on-the-spot insight into what’s around every corner as well as easy to use maps and Augmented Reality, the new app uses GPS and is preloaded with listings on where to stay, what’s on and much more. Importantly, the app ensures that there are no shock roaming charges and it’s free to download.

To make things easier, it is now possible to download this app or anything else over a free Wi-Fi connection at most of Fáilte Ireland’s main tourist offices. A roll-out to further offices is planned. The registration process for users is straightforward and a visitor need only register once and will be prompted to use the Wi-Fi in any tourist office where they visit. With 2.1 million tourists visiting a tourist office in 2012, the free Wi-Fi is bound to be a winner this year.