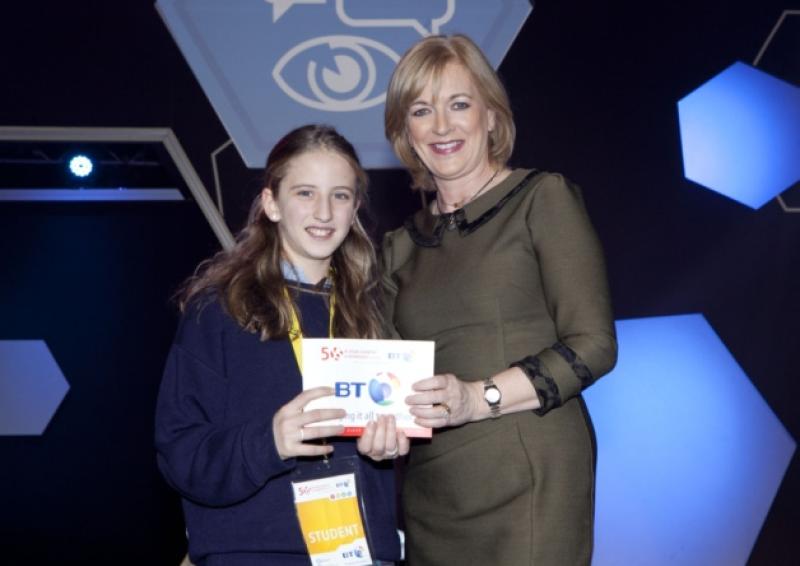 Jeremy Rigney from Banagher College picked up second place in the Intermediate Individual Technology Category with his project which investigated the use of wireless sensor data to enhance martial arts performance.

Megan Addie Douglas from Oaklands Community College in Edenderry was awarded second place in the Junior Social and Behavioural Sciences Category for her project which investigated if wind turbines affect people, animals or the environment. She also picked up a display award.

Conor Walsh from Colaiste Choilm in Tullamore came third in the Intermediate Technology Category with his project entitled ‘Gearduino’ which looked at an automatic gear system for bicyles controlled by a gearduino micro-controller.

A project by Daragh Fogarty from Tullamore College in the Senior Chemical, Physical and Mathematical Sciences Category entitled ‘To P or not to P – A study of phosphorus and renal dialysis patients’ was highly commended.

The announcement was made in the BT Arena at Dublin’s RDS by Ruairi Quinn, TD Minister for Education and Skills and Colm O’Neill, CEO, BT Ireland. Paul was entered in the senior section of the Chemical, Physical and Mathematical Sciences category.

Paul was presented with a cheque for €5,000, the opportunity to represent Ireland at the 26th European Union Young Scientist competition taking place in September and a brand new trophy. As this year’s winner, Paul will also win a once in a lifetime trip to Silicon Valley in California, home to some of the world’s biggest technology corporations, to meet BT’s Innovation team, and will enjoy a hosted tour of leading enterprises and meet business leaders from the world of science and technology.

Colm O’Neill, CEO, BT Ireland said, “When we set out last year to plan for the 50th BT Young Scientist & Technology Exhibition we wanted to make sure that this was our most exceptional event to date. I’m delighted to say that it has exceeded all of our expectations. Over the past three days we have had some of Ireland’s brightest, most creative and positive young people astound us with their ideas for a better future and we have been greatly impressed by the high standard of these entries.

He added, “Over the years the exhibition has proven to be an important launch pad for the next wave of entrepreneurs, academics, scientists and technologists; people who will be fundamental in addressing the global skills shortage. For that reason, we cannot underestimate the importance of this exhibition in encouraging our young students to pursue careers in science and technology. I would like to congratulate every single student who participated this week and of course to Paul on his enormous achievement. If our past winners have taught us anything, it’s that this award could change his life.”

Speaking about the winning entry, Professor Tom Laffey, judge in the Chemical, Physical & Mathematical Sciences category said: “Graph theory is an area of pure mathematics which studies properties of linkages and networks. It has applications in several areas including computing, molecular structure, neuroscience, search engines, engineering etc. In this project Paul makes a profound contribution to the study of graphs. He identifies key concepts and provides the methodology to apply them to some long-standing major problems in the subject with great success.”Ruairi Quinn, TD Minister for Education and Skills commented “The talent, creativity and enthusiasm expressed by our young students here this week offers a positive insight into the future of this country. We need to nurture this young talent, show them the opportunities available here in our world-class universities and encourage them to be a part of Ireland’s bright future. I would like to congratulate our winners who have done exceptionally well to succeed against such worthy competitors and I hope that everyone who participated in this year’s BT Young Scientist & Technology Exhibition will continue to innovate and create new ideas. Finally, I would like to acknowledge the many teachers and parents who play a very important role by encouraging the students to get involved and supporting them on their journey.”

In all, almost 1,165 students from 32 counties covering 550 projects from 210 schools nationwide competed for the coveted title ‘Winner of the BT Young Scientist & Technology Exhibition 2014’.

Further awards presented tonight included Best Group which went to first year students Cathy Hynes aged 12 and Eve Casey aged 13 from Kinsale Community School, Cork for their project “A study using statistical methods of people’s attitudes to the aging workforce of the future”. The girls were entered in the Social & Behavioural Sciences category at junior level.

The award for individual runner-up went to second year student Shane Curran aged 13 from Terenure College, Dublin for his project “Chemical.io: The cloud based lab management solution”. Shane was entered in the Technology category at junior level.