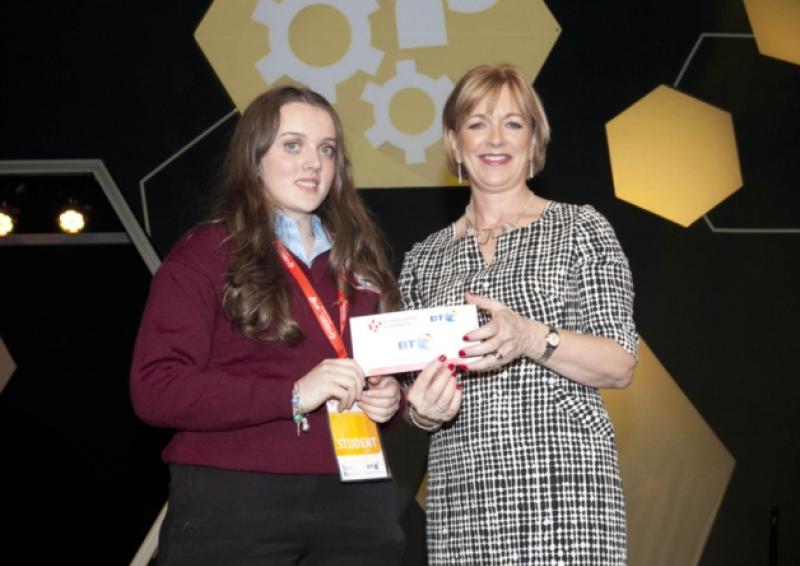 St Brendan’s Community School pupil Shiofra Ryan was awarded the Father Tom Burke Memorial Bursary for her project ‘An Tionchar’ (The impact hurling boot) which was entered in the Technology Category. Shiofra also came second in the Intermediate Individual category.

As well as being Highly Commended for their project ‘Honeybees don’t need protractors to make perfect hexagons’, Olivia Summervilee and Maria Guinan from the Sacred Heart School in Tullamore also picked up an award in Jack Restan Displays.

The announcement was made in the BT Arena at Dublin’s RDS this evening by Jan O’Sullivan, TD, Minister for Education and Skills and Colm O’Neill, CEO, BT Ireland. The pair entered in the Intermediate section of the Social & Behavioural Sciences category.

Ian and Eimear were presented with a cheque for €5,000, the opportunity to represent Ireland at the 27th European Union Young Scientist competition taking place in September in Milan and the BTYSTE perpetual trophy. In addition they will receive an all-expenses paid trip to London to go behind the scenes at the state of the art BT Sport studios, take in a Premier League game and also do a tour of the BT Information Age exhibit at the London Science Museum.

Colm O’Neill, CEO, BT Ireland said, “Every year the BT Young Scientist & Technology Exhibition captures the public’s imagination by demonstrating the creativity, ingenuity and potential of our young people. Over the past three days we have had some of Ireland’s brightest, hard-working and positive young people inspire us with their ideas. Everyone involved with the exhibition has been hugely impressed by the calibre of these entries.

He added, “This exhibition continues to be the showcase for our next generation of entrepreneurs, academics, scientists and technologists; minds that will tackle and solve some of the most challenging issues facing our planet. I would like to congratulate every single student who took part this week. Participating in the BT Young Scientist & Technology Exhibition is a great achievement and congratulations of course to Ian and Eimear on an enormous achievement. If our past winners have taught us anything, it’s that this award can be life-changing.”

Jan O’Sullivan, TD Minister for Education and Skills commented “The talent we have seen in the RDS this week offers a positive insight into the future of this country and I am greatly impressed by the standard of the entries to this important event. I would like to congratulate our winners who have done exceptionally well to succeed against such worthy competitors and I hope that everyone who participated in this year’s BT Young Scientist & Technology Exhibition will continue to innovate and create new ideas. I want to commend all the students involved, in particular the winning entries, but also their parents and teachers who have helped them come so far.”

In all, approximately 1,200 students from across the island of Ireland covering 550 projects from 206 schools competed for the coveted title ‘Winners of the 2015 BT Young Scientist & Technology Exhibition’.

The award for runner-up group went to transition year students Patrick Sweeney (aged 16), Chloe Daniels (aged 16) and Annette Moran (aged 15) from Carrick-on-Shannon Community School, Co. Leitrim for their project ‘Birdsong and music: Connections between African and Irish music and developments of a new music genre based on the Galapagos Island’s birdsong’. The group was entered in the Biological & Ecological Sciences category at intermediate level.

The award for individual runner-up went to transition year student Jack O’Sullivan aged 16 from Kilkenny College for his project ‘SmartphonePC’. Jack entered in the Technology category at intermediate level.