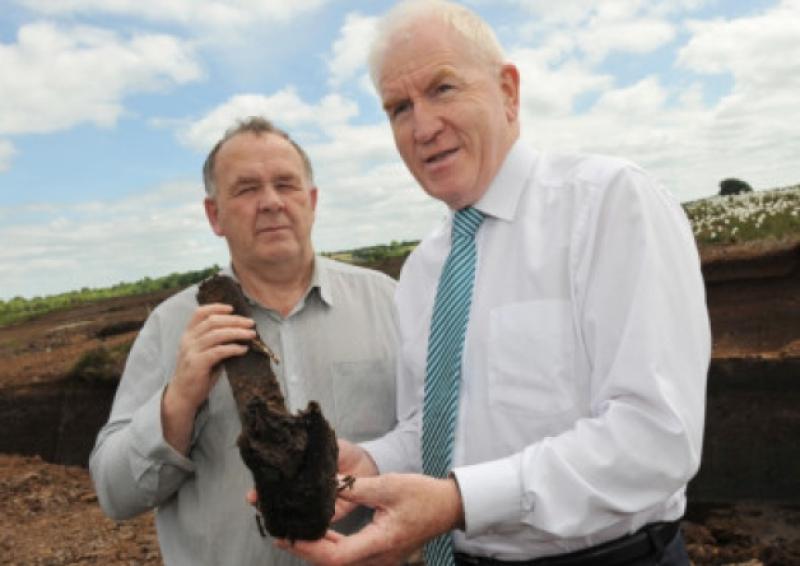 Jimmy Deenihan TD, Minister for Arts, Heritage and the Gaeltacht, accompanied by Seamus Boland, Chair of the Peatlands Council, has recently visited Killeranny Bog near Clara in County Offaly.

Jimmy Deenihan TD, Minister for Arts, Heritage and the Gaeltacht, accompanied by Seamus Boland, Chair of the Peatlands Council, has recently visited Killeranny Bog near Clara in County Offaly.

Killeranny is a relocation bog which is now being used by turf cutters who were previously cutting on Clara Bog. Clara Bog is one of 53 Special Area of Conservation (SACs) raised bogs. In line with Government policy which is to assist turf cutters who cannot cut turf on protected sites to transfer to a new bog where they can continue cutting turf legally, 23 turf cutters have been accommodated on Killeranny and are in the process of saving turf.

Minister Deenihan commented, “I would like to thank the turf cutters from Clara Bog who engaged with my Department and worked with us to find a long term solution. Because of this cooperation Clara Bog - which is an important raised bog and habitat - is being preserved, and the turf cutters can continue to gather turf at the Killeranny relocation site. Cooperation, relocation and compensation are the best ways that we can ensure that these raised bogs are preserved for future generations, whilst also ensuring that affected turf cutters are dealt with fairly.”

Seamus Boland, Chair of the Peatlands Council, accompanied Minister Deenihan on the visit and commented, “I was delighted to be able to accompany Minister Deenihan on this visit so that he could witness, at first hand, the real progress that has been made here. The people of Clara are very proud of Clara Bog, and of the fact that it is a unique and important site. The community at Clara regard the bog as not just an important environmental asset but also one which can create local employment in the future through work on the long term restoration and preservation of the bog. This is something that the Peatlands Council is working on, both for Clara and other protected sites.”

There are 53 raised bog Special Areas of Conservation in Ireland all nominated for designation between 11 and 16 years ago. These bogs are unique, and make up approximately 2% of the national peatlands from which turf can be extracted.

A flexible package of compensation for turf cutters affected by the designations is in place. This package includes a number of options for turf cutters including financial compensation, or the provision of a relocation bog for cutting turf where that is possible with the option of the financial payment or the delivery of turf while awaiting relocation. Turf-cutters can apply for a payment of 1,500 euro – each year for 15 years – along with a sign up payment of €500 when legal agreements are signed. This brings the total available financial compensation package to 23,000 euro, index linked and tax free.

In addition to Killeranny in County Offaly, arrangements for the relocation of turf cutters to non-designated bogs have been made for a group of turf cutters from Carrownagappul Bog and Curraghlehanagh Bog in County Galway.

Of the remaining 50 raised bog special areas of conservation, potential relocation sites have been identified for a further 33 bogs and work is ongoing on identifying and investigating sites. Relocation is unlikely to be required, or is likely to be small-scale, for another 16 raised bog special areas of conservation due, for example, to the small number that had been cutting turf on these sites during the relevant five year period and would qualify for the relocation option available under the cessation of turf cutting compensation scheme.