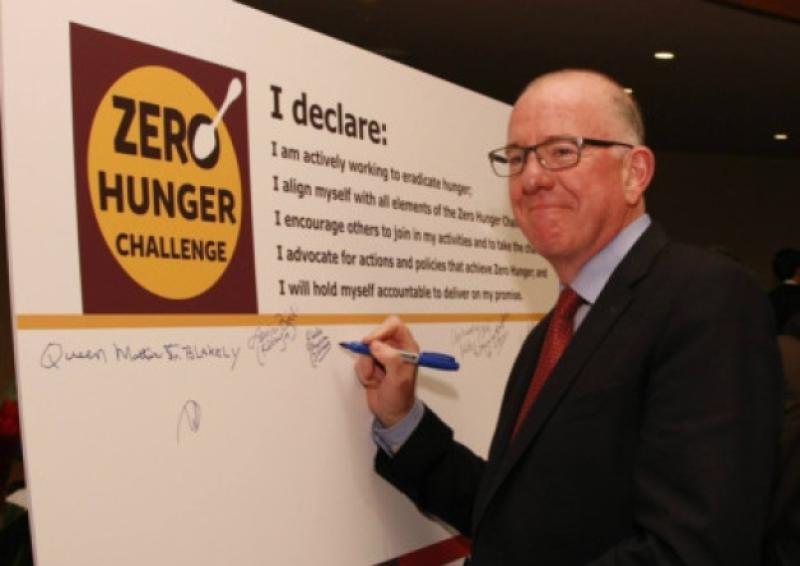 Laois TD Charlie Flanagan has paid an historic visit to the United Nations in New York as Minister For Foreign Affairs and Trade.

Laois TD Charlie Flanagan has paid an historic visit to the United Nations in New York as Minister For Foreign Affairs and Trade.

During his busy first visit to the United States, the Mountmellick native also met the UN Secretary General, Ban Ki-moon.

His visit will aso raise hopes locally of job creation in Laois through US investment, as he met business leaders and others in three cities.

Addressing the UN assembly, attended by EU Foreign Ministers and the US Secretary of State John Kerry, Minister Flanagan condemned the “bloodlust and inhumanity” displayed by ISIS in Syria and Iraq, underlining the importance of dialogue to resolve conflicts.

“The scapegoating of people based on their ethnicity or religion harks back to a mentality and a culture that we thought we had seen the last of a millennium ago,” he said.

He highlighted the role of women in peacebuilding and in tackling the subject of sexual violence.

“An important element in any peacemaking or building process must be the full and equal participation of women,” he said.

During his meeting with Ban Ki Moon he highlighted Ireland’s commitment to eradicating hunger. They also discussed the situation in Syria and Iraq, developments in Ukraine and Gaza, and the Ebola epidemic in West Africa.

Speaking before the trip, Minister Flanagan said it was an “important opportunity to re-state Ireland’s long-standing commitment to the United Nations, and its primary role in protecting international peace and security”.

During a busy week of appointments, he travelled to New York, Washington and Boston, to meet political and business leaders and representatives of the Irish community, in efforts to promote Ireland as a location for US foreign direct investment.

“In my meetings with key US business and political contacts, I will highlight Ireland’s business friendly environment and talent flexible workforce which makes Ireland such an attractive investment destination for US business.

“Equally I will promote our innovative indigenous companies, many of which are already operating successfully in the US and driving our economic recovery at home,” he said.In Washington he launched a programme to mark 90 years of US-Ireland diplomatic relations. Minister Flanagan also met US contacts to discuss developments in Northern Ireland.

He pressed for immigration reform during his discussions with political contacts and US agencies.

The Minister returns to Ireland on Wednesday October 1.