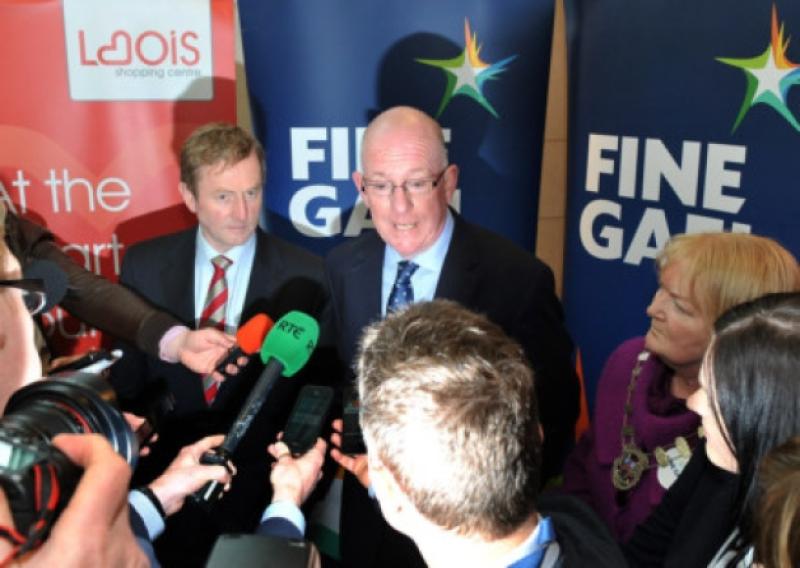 Home came the hero, Charles Flanagan, believed to be Portlaoise’s first ever full Government Minister. With him was his beaming pal, Taoiseach Enda Kenny.

So exuberant was Joe Deegan, a nephew of Cllr James Deegan, that he predicted: “We are going to turn this (Portlaoise) into a real blue town!”

Scene: Laois Shopping Centre. Date: last Thursday. Charles Flanagan had sped straight down from Dublin after receiving his seal of office as Minister for Children and Youth Affairs. For him the long wait for promotion was over.

His wife Mary welcomed him home with a kiss, as did County Council Cathaoirleach Mary Sweeney, her daughter Aoife and other ladies, including the great Jackie McCluskey from the nearby New Road.

In the welcoming party, too, was Borris-in-Ossory woman Dympna Kennedy who revealed that she had won a tenner by predicting Charles’ elevation to ministerial status and Frances Fitzgerald’s promotion to the Justice ministry.

From Borris also came Tim Delaney, complete with Fine Gael badge and wheeled shopping bag, and he did the full tour with An Taoiseach and Charles, to the discomfort of some.

“I nearly broke my leg over that f...... thing,” wailed one grimacing Councillor, pointing to the shopping bag and rubbing his shin.

As was to be expected, Fine Gael Council candidates were there aplenty. Kathleen O’Brien was particularly pleased that her beloved Portlaoise had at last got a Minister. John Finlay compared the ordeal of trying to get elected to that of studying for the Leaving Certificate.

Present, too, were retiring Councillors James Deegan and John Bonham. The latter clicked away with his camera. “Is he going into the blue movie business or what?” quipped one onlooker.

James Deegan’s charming grandchildren, Sandra Cunningham, aged two, and David Cunningham (four) were among the first to welcome Enda Kenny. Their parents are Gilian and Joe Cunningham. Their granny, Gilian Deegan, was also enjoying the occasion. As were John White, a legal partner of Charles Flanagan, and the ever youthful former TD and Senator, Charles McDonald.

Another veteran Fine Gaeler in attendance was Mountmellick ex-Town Councillor Dave Conroy. “My first election working for O J Flanagan, Charlie’s father, was in 1951,” he recalled. He reminded us that the legendary Oliver had also served as a Minister--for Defence--and that he was Parliamentary Secretary to Agriculture Minister James Dillon in the 1950s.

“How would your father have reacted to your promotion?” an interviewer asked Charles. He replied: “He would have told me that I had been given a great opportunity and the unique privilege of serving at the cabinet table--and he would have told me to work diligently and work hard.”

Enda and Charles paused outside a pharmacy. A pep pill stop to keep them going? No, they were intent on meeting more people. They met Shopping Centre Manager Kevin Doyle and Adrian Meehan who complained about the household and water charges.

Then Enda, perhaps tiring, sat down--on a sofa that he shared with Portlaoise men Pat Dunne, Frank Rice and Brian Conroy. Rested, he exited the Shopping Centre, climbed into his car and left the stage to our new Minister.

Ah, the day that Charlie Flanagan was made a Minister. It will, perhaps, go down in folklore.