New sculpture unveiled on the motorway 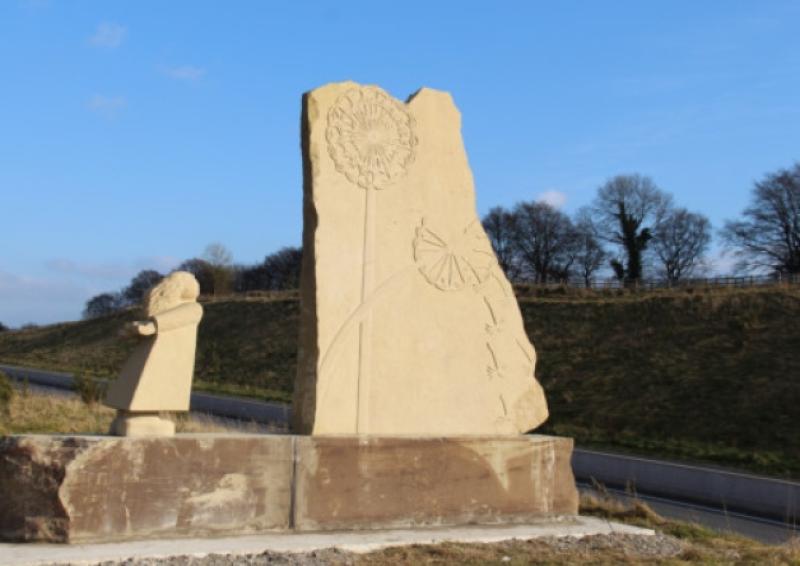 DRIVERS coming through Offaly on the Dublin to Limerick motorway will now have new art to admire on their trip, as a new sculpture has been unveiled between Castletown and Nenagh.

DRIVERS coming through Offaly on the Dublin to Limerick motorway will now have new art to admire on their trip, as a new sculpture has been unveiled between Castletown and Nenagh.

The newly installed artwork entitled ‘The Dandelion’ by artist Michael Disley at Rathnaveogue was provided under the Per Cent for Art Scheme.

The artwork was created in association with the N7 Castletown Nenagh Scheme led by Laois County Council, under the auspices of the National Roads Authority and in partnership with North Tipperary County Council and Offaly County Council.

LCC, as the lead authority, in partnership with North Tipperary County Council invited submissions for the two-stage open competition and the project was awarded to artist Michael Disley, based in Holmfirth, UK through an independent selection panel process.

Michael has over 20 years experience of working in the public art realm and has over seventy pieces sited in the UK, Europe and Japan. The vision for this project was to commission an original and permanent artwork that reflects contemporary art practice and responds to the locale.

‘The Dandelion’ is a two piece carving with a figure seen blowing at a bas relief carved dandelion. The image depicts the journeys that all travellers make as we are scattered around the country. It also suggests the passage of time echoing the many archaeological sites along the route. The large slab of stone takes inspiration from the shape of the Devils Bit Mountain Range with a piece seemingly bitten out of the rock. The 4 meter high sculpture sited perpendicular to the motorway also gives the idea that the clocks blown from the dandelion are taken further on their journey by the passing vehicles.

With a total budget of €55,000, the project includes artists fees, design development, fabrication, supply, foundations and installation and landscaping works, artists insurance, health and safety costs, VAT, and all other expenses.

The artist said that he was initially inspired by the idea of a two-piece sculpture, one three dimensional together with a large bas relief.

“I like the idea of the contrast between these different elements, and the fact that there is a narrative between them. Most of my sculpture has an element of humour in it and I do think that this is one of the reasons I have been commissioned to produce work in Ireland so often. This is my tenth large sculpture project across the Irish sea and if not the largest, certainly the highest. I hope that the work is well received, it would be nice to imagine children in the future looking out for the dandelion as they travel along,” said the artist..