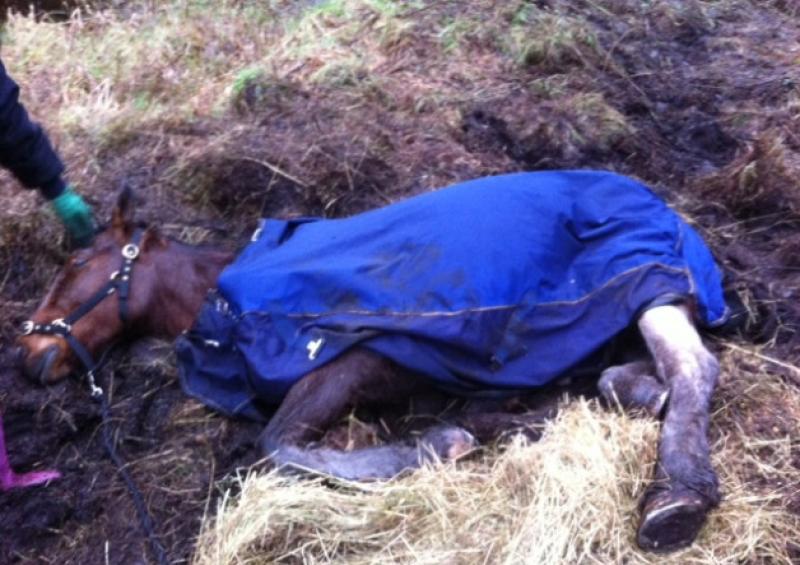 On Sunday evening last, February 23 at 9.20pm, the Offaly SPCA was contacted by Tullamore Garda Station Informing us they had received a report involving an equine in distress in the Edenderry area.

On Sunday evening last, February 23 at 9.20pm, the Offaly SPCA was contacted by Tullamore Garda Station Informing us they had received a report involving an equine in distress in the Edenderry area.

Despite the best efforts of a team of dedicated individuals, the horse could not be saved and the sad decision was taken on Monday afternoon that, on humane grounds, it was best to euthanise the increasingly weak animal.

That evening a volunteer with Offaly SPCA attended the scene along with a vet from nearby Eden Veterinary Clinic, but unfortunately due to the location of the horse and lack of daylight the vet and OSPCA volunteer were unable to reach the distressed equine. The Irish Horse Welfare Trust and the ISPCA were informed of the situation that evening.

The following morning the OSPCA volunteer and her colleague returned to the location to discover the horse was a further 200 yards off the roadside, a road known locally as the tunnel road. The location itself proved problematic due to the distance from the main road. The lane way was accessible by foot only as the entrance was protected by a locked gate, the pathway was overgrown, marshy swamp land.

On sight of the equine it was clear that she was alive but in a very distressed state. The horse was chest deep in a drain close to the Grand Canal, the water was freezing cold, filthy and stagnant.

The equine was a mare approximately 10-12 years old, skewbald (mostly brown) in colour and approximately 15 hands in height with distinct markings. She had been recently shod. She was in a very emaciated condition with spine, ribs, pelvis, and shoulder blades all clearly visible. The mare was not microchipped.

The Offaly SPCA volunteer remained with the distressed equine trying to coax her closer to the edge with food as it was clear she was starving as she made valiant efforts to edge closer and closer, however despite her efforts she only managed two or three steps, at this point her exhaustion was clearly evident.

At approximately 11.30 am ISPCA inspector Michael Keane arrived at the scene as did a number of locals in a bid to free the troubled mare. Offaly SPCA managed to raise the alarm with the land owner and get the entrance gate unlocked and made accessible. Donal O’Dwyer, a vet from nearby Eden Veterinary Clinic arrived as did local man Martin Brerteon with his jeep and winch.

A dedicated team now surrounded the distressed animal and managing to secure her with ropes and straps and pull her to the drain edge and out of the water. At this stage vet Donal O’Dwyer assessed the mare. Her condition was very weak and she was borderline hypothermic. He recommended she be kept warm with rugs and fed in an effort to keep her warm in th ehope of bringing her to her feet.

The Offaly SPCA volunteer fetched rugs, hay, water and feed. The mare appeared a little brighter and did eat some hay but unfortunately did not manage to get up on her feet. As the afternoon went on it became evident that the mare was becoming weaker and weaker and slowly becoming less responsive to the people around her.

The ISPCA inspector along with the Offaly SPCA volunteer made the decision to again call upon the vet to further access the mare and her appearing failing condition. Donal O’Dwyer returned to access the mare. Her condition had indeed deteriorated and the vet made the tough decision that continuing the rescue effort was only prolonging her suffering so a decision was made to euthanize her on humane grounds.

The rescue operation took nine hours from start to finish. A fantastic dedicated number of people generously gave their time, resources, and energy but sadly despite all their efforts the unfortunate mare did not pull through.

The ISPCA and other animal welfare groups around Ireland are dealing with a major increase in horse, pony and donkey cruelty and neglect cases. Ireland is in the midst of an equine crisis. A number of factors cause more and more horses to suffer. Irresponsible breeding during the boom years has caused Ireland to be inundated with unwanted equines. Added to this is the increasing cost of horse feed and the failing value of equines.

Legislation is clear every equine needs to have a passport and microchip which forces accountability and traceability, but without sufficient resources put in place to enforce this legislation, more and more horses are being neglected and abandoned and ultimately left to suffer and die.