Farm service a memorial to loved ones 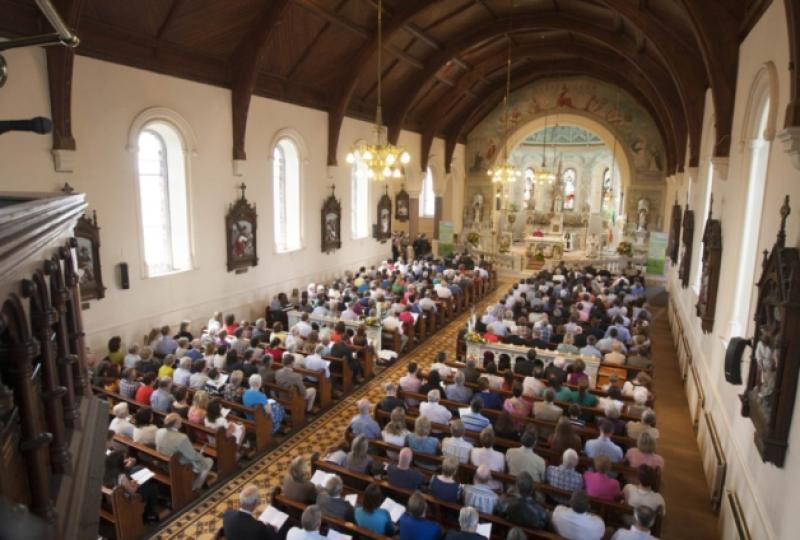 In excess of 600 people packed into the Most Holy Rosary Church, Abbeyleix on Sunday to remember loved ones who died in farm accidents stretching back almost 70 years.

In excess of 600 people packed into the Most Holy Rosary Church, Abbeyleix on Sunday to remember loved ones who died in farm accidents stretching back almost 70 years.

The national ecumenical event was organised by Shanahoe couple Brian and Norma Rohan, after Brian’s own father Liam died shortly after a farm accident. The tragic event spurred them on to help others and Sunday was the culmination of planning and organisation which stretched back to the start of the year.

Minister for Agriculture Simon Coveney and Minister for Children Charlie Flanagan were present along with the Taoiseach’s aide-de-camp Kieran Carey. Various representatives of farming bodies and businesses also attended from across the 32 counties.

Four rugby players, Sean O’Brien, John Hayes, Rory Best and Adrian Flavin, representing the four provinces, carried candles to the alter which were lit to remember those who died in farm related accidents from their region.

Mr Rohan said people had come to him and his family asking they had coped. “The first twelve months are the hardest. After that, you just get through it,” he said.

Brian said the first year is the toughest as you have to encounter every occasion for the first time without a loved one. “You are on auto pilot after the accident and the funeral. After the funeral it’s then the first of everything. For me there was the first cattle dosing and the first cutting of silage without dad,” he said. Brian added that when he went to cut silage for the first time, he sat in the tractor for 10 or fifteen minutes as he came to terms with his father’s absence

Brian admitted he was emotional when he asked his wife and children to join him for his own speech as they were the ones who had kept him going. Brian said he was moved by the standing ovation he received.

While the event was hosted to remember family’s loved ones, the focus was also on preventing further accidents. The HSA has 95 people on record as having died in farm-related accidents in the past five years. “That’s why we wanted to get the rugby players on board so we might catch the attention of the younger people,” Brian said. With the players all having farm links, and Rory Best’s team-mate Nevin Spence having died along with two other family members in a farm accident, they were all keen to come on board straight away. Their services may be called upon for proposed school visits on farm safety in the future.

Feedback is now being gathered from questionnaires to see if the event will be held on an annual basis and consider any suggestions. Further information is available from: Embrace 085-7709966; Facebook: https://www.facebook.com/embracefarmaccidents; Twitter..@EmbraceFARM http://www.embracefarm.com/