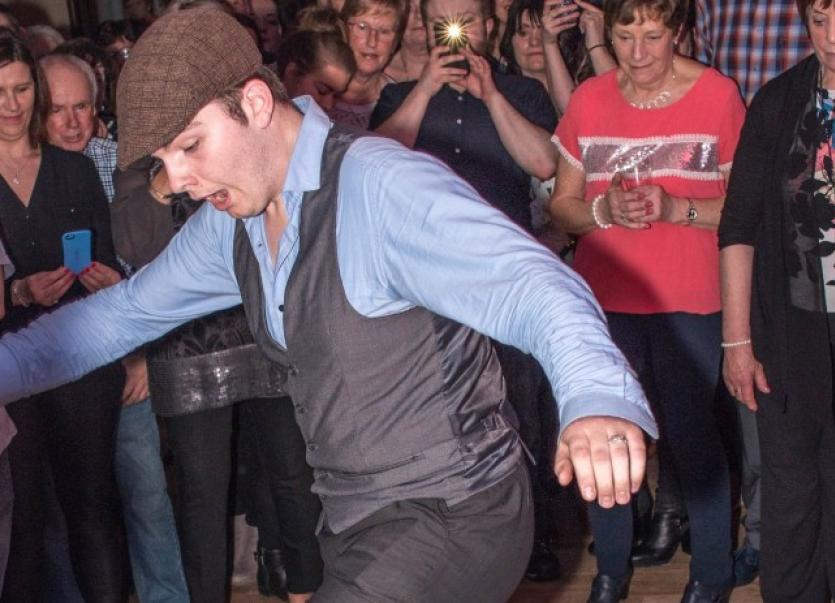 Thomas Connolly, a young sean-nos dancer from Offaly, gave an exhibition of his own unique style in Limerick last weekend.

The exhibition came at the invitation of Conradh na Gaelige and demonstrates Connolly's growing reputation, not just as a dancer, but as an entertainer. His exhibition took place last Friday, lasting from noon to 2pm.

Now living in Galway, what Thomas brings to every performance is an undeniable energy and a vibrant enthusiasm that quickly spreads throughout the room, drawing all eyes to him. And he was delighted to "step her out" from Offaly to Limerick last weekend.

"I love dancing, it's my passion. I do it every day of the week down in Galway with my band, and I nearly end up doing it every night of the weekend, too, because I always tend to end up wherever there's music and dancing."

"That's just what I'm naturally drawn to. So of course, when the invitation to go down to Limerick to demonstrate my style of sean-nós came along, it was happily accepted."

Sean-nós, which means old-style in English, is just that: an older style of traditional solo Irish dance, more casual in nature than the often competition based form of Irish stepdance. While the Connemara style of sean-nos adheres to an almost rough-and-ready sense of informality, and tends to be danced strictly to reels only, Thomas describes his own style as being essentially more freestyle.

Thomas also includes jigs in his performances, and while his freestyling manner is both relaxed and traditional, he intentionally strives to give those performances a more polished feel, ever-conscious of the fact that when he dances it's not just an activity he's taking part in himself, it's a form of entertainment for those watching as well.

"I think that's very important, and that's an aspect of my dancing that I spend a lot of time thinking about and working on. I'll enjoy dancing no matter what, because I always have. But when I dance, I want the people watching to enjoy what they're seeing me do, as well."

To find out where you can catch Thomas making his next guest appearance, you can follow him on Facebook.