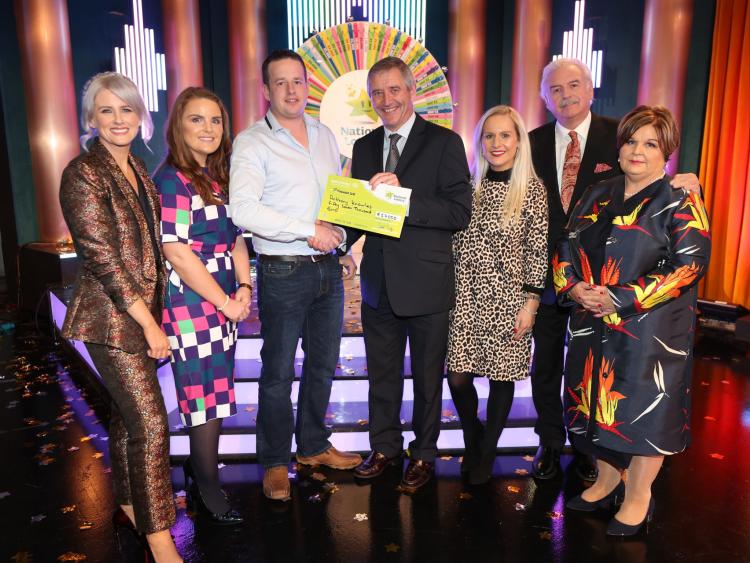 Midlands man to use €57,000 Winning Streak winnings to care for daughter

A Midlands man spun the Winning Streak wheel last Saturday night winning a total of €57,000 which he pledged to use for medical care for his ill daughter.

Anthony Knowles from Ballyroan, Co. Laois is well known in the area and nationally as just two months before their appearance on the National Lottery game show, himself and his family appeared on Virgin Media TV Show, “The Town” earlier this year where they articulated their difficulties in getting treatment for their youngest daughter Mary-Claire (2) who suffers from a rare form of epilepsy called Dravet Syndrome.

On this programme, Anthony and his partner Rose spoke of the harrowing prolonged seizures that their daughter Mary Claire has and how they could be forced to move abroad for treatment as the facilities are not available in Ireland.

On the show, Anthony won a total of €57,000 which included €33,000 in cash and a further €24,000 on the Grand Prize Wheel. His Winning Streak appearance could not have come at a better time as Anthony had stated that the family may need to move to the Netherlands for little Mary Claire to get treatment for her condition.

Anthony has lived in Ballyroan since he moved in with Rose almost a decade ago. The couple have three children: Mary-Claire (2), Daniel (6), and Anthony (4) with both boys enjoying supporting their dad from the audience last Saturday. Mary Claire was excited to watch her daddy on the television at home.

The Knowles family has been overwhelmed by the support from the Ballyroan community over the past couple of weeks since Anthony’s name was pulled from the Winning Streak drum and in truth he says the community have been so kind to his family since ‘The Town’ TV programme aired back in September. In fact last week, the community raised more than €15,000 for Mary-Claire at a livestock and fodder auction in a local bar.

A brand new-look Winning Streak scratch card is available in the 5,900 National Lottery retailers all over the country, where as well as the chance to appear on the Winning Streak TV game show if you  get three stars, players will also be in with a chance to win some great cash prizes up to €5,000. The odds for those who purchase a Winning Streak to win is 1 in 1.76 to win a cash or three star prize.  Players can also send their scratch card stubs into the National Lottery where each week, on the show, a player will be drawn as the winner of a Luxury Cruise for two valued at €5,000. The winner of this week’s cruise is Jurate Kanisauskiene from Killarney, Co. Kerry.

As ever one of the lucky five players will get the chance to spin the wheel and win up to €500,000.  But this series a €100,000 segment will be added to the iconic Grand Prize Wheel every show if less than that was won in the previous show, improving players chances to win a massive prize.