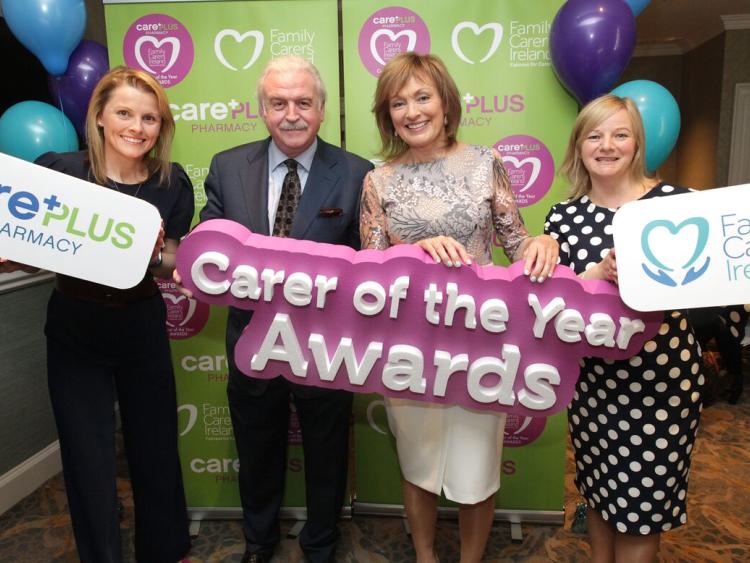 Last call in Offaly to find Ireland's 'Carer of the Year'

The deadline for nominations for Family Carers Ireland CarePlus ‘Carer of the Year’ awards has been extended to September 28.

The ‘Carer of the Year’ awards recognises Carers for the extraordinary hard work and dedication involved in caring for their loved ones every day.

Family Carers Ireland need your help to identify these Carers. If you know a Carer that you believe should be recognised for the care they provide to loved ones, please make a nomination. This may be a relative, neighbour or friend. There are two categories of awards, Carer of the Year and Young Carer of the Year

The CarePlus ‘Carer of the Year’ awards will take place in November at the Westin Hotel in Dublin hosted by broadcasters, and patrons of the charity, Mary Kennedy and Marty Whelan. Last year’s ‘Carers of the Year’ will be in attendance. Paula Robinson (48) from Cavan (48), a mum of two, provides round-the-clock, full-time care for both her parents. Her mother Mary (87) has Alzheimer’s disease and her dad Jimmy (92) is living with Bowel Cancer.

Alongside four inspirational Young Carers, Jack Cooney (10) from Tipperary who helps care for his brother James (16) who is living with Cerebral Palsy, is a wheelchair user and requires round-the-clock care. Adam Hyland (14) from Clondalkin who helps his mother care for his dad Pat (66) who has multiple illnesses including Dementia, Diabetes, severe chronic pain and has suffered many heart attacks. Alannah Donnelly (15) from Offaly helps care for her brother Conor (12). He is a person with intellectual disabilities and severe behavioural issues resulting in aggression and harmful behaviours towards others. Alexandra Ajoi (15) from Sligo is the primary carer for her mother, Susan (41), who is a wheelchair user with chronic pain and has epilepsy.

There are now over 6,057 family carers in Offaly over the age of 15, saving the Government €10bn in unpaid care nationwide each year. By 2030, demographic changes predict that one in five people will take on a caring role.

Catherine Cox, Head of Communications and Carer Engagement with Family Carers Ireland said, “Family Carers across Ireland make extraordinary sacrifices and work very hard, sometimes 24 hours a day, to provide care for their loved ones, safely, in their own homes. With limited access to services and particularly respite, Carers in Offaly are overstretched and receive little acknowledgement for their unpaid work with ¾ receiving no payment from the State, saving €10bn each year.”

“Family Carers Ireland is delighted to celebrate and recognise the enormous contribution that Family Carers make through the CarePlus Carers of the Year Awards. We are encouraging people to get their nominations in for a deserving Carer or Young Carer from Offaly, the deadline is soon approaching,” concluded Catherine.

Niamh Lynch, Commercial Director of CarePlus Pharmacy said “CarePlus Pharmacy is honoured to sponsor the Family Carer of the Year awards, which recognises the tireless efforts of thousands of people across the country. Carers are the heart of every community and meet our pharmacy owners and staff every day. We look forward to working closely with Family Carers Ireland and supporting the awards throughout our fifty community pharmacies nationwide.”

CarePlus Pharmacy, a network of 60 franchised pharmacies, is sponsoring the event for the second year running and is now sponsoring the CarePlus Young Carers of the Year Awards 2018 which recognises the role that young people play in providing care to their loved ones at home. This year, the CarePlus ‘Carer of the Year’ awards form part of Family Carers Ireland’s national ‘Carers in Crisis’ campaign and will acknowledge the contribution of Family Carers throughout Ireland. The awards will highlight the sacrifices Family Carers make and the services they provide to the State.

Making a nomination is simple, fill in the nomination form online, giving as much detail as possible as to why the Carer should be considered for an Award. Nomination forms for Offaly CarePlus ‘Carer of the Year’ are available online at www.familycarers.ie, from Family Carers Ireland resource centres, CarePlus Pharmacies or via the Freephone Careline 1800 24 07 24.