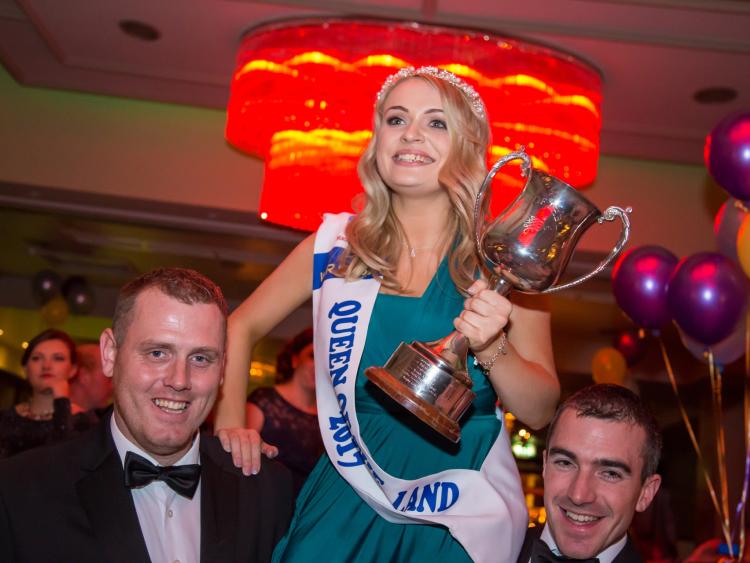 Emma Birchall from Kildare was crowned the W.R. Shaw Queen of the Land for 2017 with Head Escorts Fergal Leonard and Ronan Phelan. Photography by Paul Moore

Following on from the Queen of the Land annual general meeting, a new committee was elected earlier this year.

This year's prestigious festival will run from the 9th-11th of November 2018 in the Bridge House Hotel, in Tullamore Co. Offaly.

Founded in 1964 as part of the Kilkenny Beer Festival by the Irish Farmers Journal, the competition was moved to Offaly three years later and has remained since.

Now approaching its 54th year, the Queen of the Land Festival is the highlight of the Macra na Feirme calendar each year, drawing crowds from all over the country in order to support their local ladies.

The Festival aims to celebrate the talents and achievements of the young women of Macra na Feirme while entertaining the masses. Entertainment for this years Festival will be announced in the coming months.

Incoming re-elected chairperson Gerard Mahon, said “I'm absolutely delighted to have been re-appointed chairperson for this year and I would like to extend a warm welcome and wish every success and best wishes to the new committee, especially the newly elected committee members. This year is going to be very exciting and action-packed, with new and fresh ideas set in motion for this year's festival.”

The 53rd Queen of the Land 2017 Emma Birchall, a medical student from Kilcullen Co. Kildare, is currently enjoying the royal life. She is touring the country, sash and crown in tow, from local agricultural shows, to chatting with Nicky Byrne and Jenny Greene on RTE 2fm. She’s even had afternoon tea with the President Michael D Higgins in Aras an Uachtarain. The opportunities are endless with the Queen of the Land Festival!