Offaly is one of the cheapest counties for dental care

New research by www.dentalbooster.com has revealed that Offaly dentists are among the cheapest in the country.

Dental costs are significant across the country but the likes of Donegal, Offaly, Monaghan and Meath are the cheapest if you find yourself in need of treatment.

The price comparison index showed that the average price of a dental consultation in Offaly is €36.67, compared to almsot €50 in Dublin, €43.18 in Kildare and €43.75 in neighbouring Laois.

One of the most common treatments provided by dentists, a filling, will cost an average of €65 in Offaly, while the same procedure in Dublin will cost €88. The average in Laois is higher than Offaly at €75, while it costs €78 in Kildare and as high as €89 in Kerry. Donegal is one of the cheapest county for dental care with a white filling costing less than €60.

Offaly is also one of the cheapest counties for verneers, a notoriously expensive treatment that can cost as much as €700 in counties like Roscommon. The same procedure in Offaly will set you back €500 on average, less than the €567 charged in Dublin, €616 in Kildare and €550 in Laois.

Amazingly, Monaghan comes in as vastly cheaper than all counties with verneers costing an average of €275 and an initial consultation costing as little as €36. 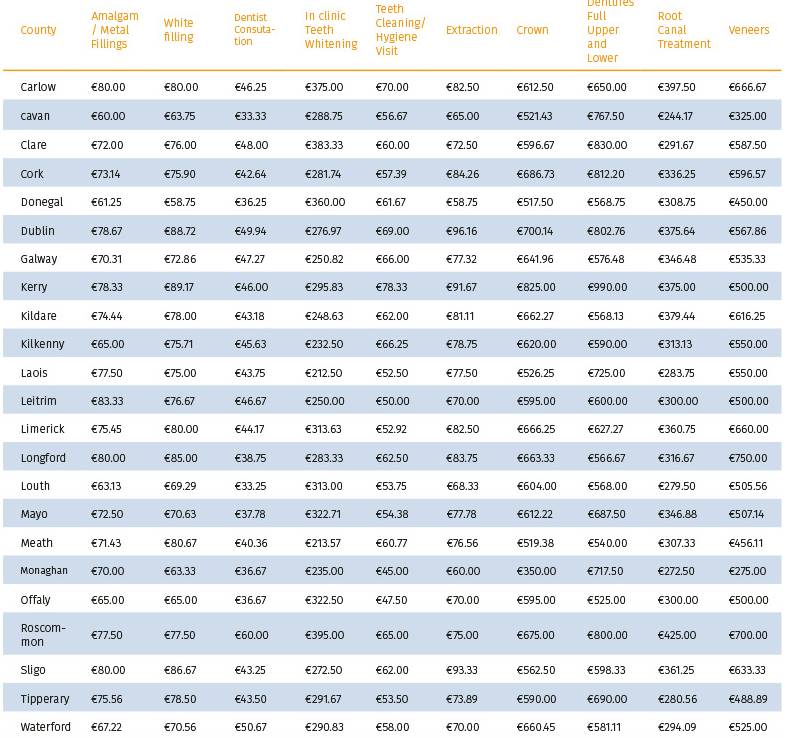 Leading health insurance expert Dermot Goode of Totalhealthcover.ie spoke about the research, and suggested that not enough people in the country are aware of the dental insurance that exists on the market.

While he advises that, unlike health insurance, it’s not cost effective for everyone to take out a policy, he believes there are thousands of people who could cut the cost of their dental bills significantly by ensuring they have some cover in place.

Mr. Goode explained, “Just 1-2% of the population hold dental or cash plans, but we have found that the reason behind the low take-up is simply lack of awareness, rather than lack of need."

"While every county varied in the Dentalbooster research, it showed that dental work in Ireland is not cheap, and in my own experience I would even say that some of the costs in this report were at the lower end of the scale."

"Most dentists will work out a flexible payment plan for their patients, but the sums involved are still significant," he added.

The experts at TotalHealthCover.ie say that many private health insurance policy holders simply assume that there is adequate dental cover on their standard policy, but Mr. Goode advises that this is usually not the case.

They suggest that the DeCare Dental and VHI Dental are the main dental insurance providers for those seeking cover.