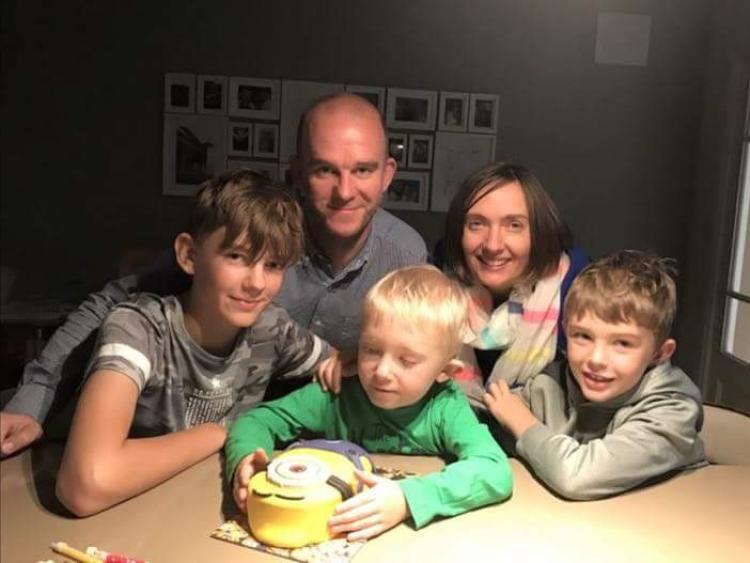 Finn Tonner (centre) with parents Gary and Rosanne and brothers Cian and Daragh.

A Portarlington dad has completed an incredible mountain climbing challenge, to support a charity helping his little son who has a rare syndrome.

Gary Tonner, along with his brother Dave and friends James Finnerty and Chris Mannering, climbed 15 Scottish mountains in five days.

They ended their challenge on May 9 with the tallest peak, Ben Nevis, 1,345m, where snow nearly defeated them.

“The conditions were bloody awful, we couldn’t even see because of a snow blizzard and we couldn’t feel our fingers because of an ice storm. Coming down is the worst, our legs were shaking, our toes were black and blue,” Gary remarked.

They had climbed up to four mountains a day, using only hiking sticks, a total of about 15,000 metres in height.

Below: on the summit of Ben Nevis. 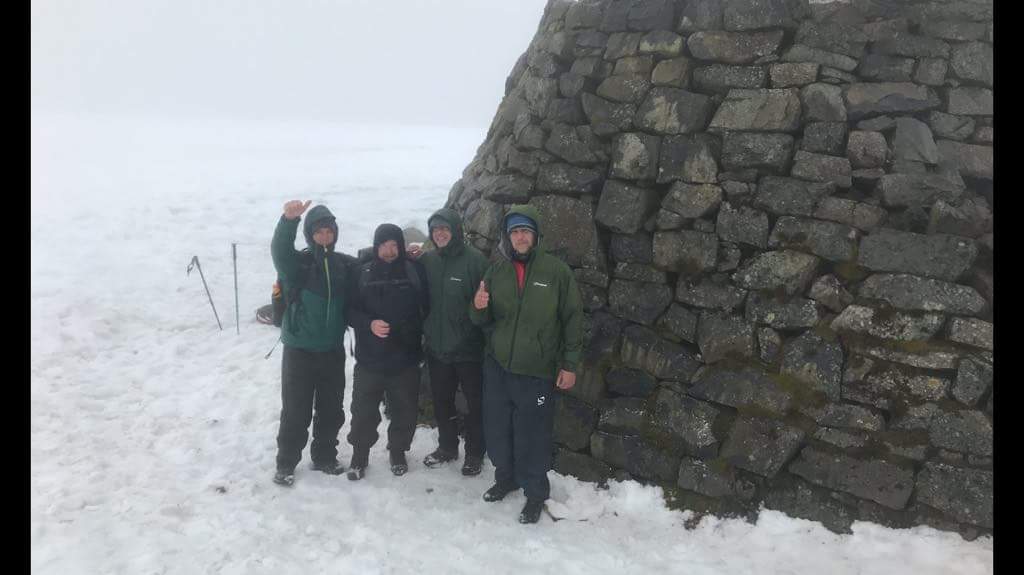 The four had little time to train beforehand, and did not employ a guide so that every penny raised could go to the charity.

“It was a good idea at the time, I walk about a lot at Intel where I work, but I never got any hill practice,” Gary said.

He attempted the challenge to help the national Irish charity 22q11 Ireland, who have given a lot of support to his little son Finn and his family.

The Glasgow native lives in Portarlington with his wife Rosanne and four children, Adam 21, Cian, 13, Daragh 9 and Finn aged 4.

Finn was born with a heart defect, and underwent open heart surgery at three months. After tests, he was diagnosed with the genetic disorder 22q11 deletion syndrome. Also known as Di George Syndrome, it affects about one in 2,000 people and can often go undiagnosed.

Gary and his wife Rosanne had never heard of the syndrome and said the professors knew little either.

“They were a fantastic support and a font of information to us,” said Gary.

Finn has been in physio since he was a year old because Di George causes low muscle tone, and the spine to curve and develop scoliosis. He is non verbal, and has palate problems that will require surgery, and immunity issues. He is in an upper body cast for the past year that gets re-cast every three months under general anaesthetic.

Despite all his problems, he is a happy boy, ready to start mainstream school in the Presentation Primary in Portarlington in September. He will have learning difficulties so his parents are trying to get an Special Needs Assistant allocated for Finn.

“He is a great person, no different than his brothers, they are very good, very protective of him. His wee character shines through everyday and he's the toughest cookie I’ve ever had the pleasure of meeting,” said Gary.

Since then the charity has been able to print leaflets to hand out to new parents, and is soon holding a conference on Di George Syndrome in the EU.

“They are near to getting a dedicated 22q11 clinic in Crumlin children’s hospital, and that will raise awareness too. We would rather new families knew what to expect so no-one goes through what we went through. Specialists give you the worst case scenario. Some members of the support group were not correctly diagnosed until they were in their 20’s, and this syndrome needs early intervention,” explained Gary.

This year Rosanne, a resource teacher working in Dublin, will also lead 30 friends, students and colleagues in the Dublin women’s mini marathon for the charity.

He thanked his brother David Tonner who sponsored his costs for the mountain challenge.

“Everyone was great, the support on social media has been amazing,” said Gary.

For more on the syndrome and on the support group see www.22q11ireland.org