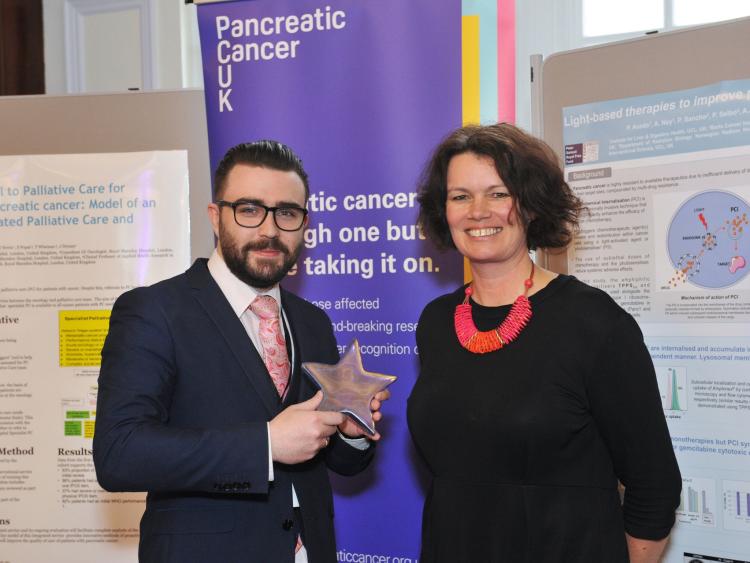 James Farrell, 30, has dedicated his charity award win to his late Offaly father who died just weeks after being diagnosed with pancreatic cancer.

James picked up the Purple Star Outstanding Contribution Award for the exceptional work he has done to date for charity Pancreatic Cancer UK. He has been fundraising in memory of his father Peter, who he lost to the disease in 2013.

James' father Peter, who hailed from Tullamore, was suffering with a bad back for several months and eventually showed symptoms of jaundice in 2013. He passed away on December 29 of that year just a month after being diagnosed with pancreatic cancer.

Peter is survived by his wife Marie and three children, James, Thomas and Katie, all of whom had their world turned upside down in such a short period of time

Since then, James has shown continued commitment and enthusiasm to helping Pancreatic Cancer UK fight pancreatic cancer and play his part in changing survival statistics in his father’s memory.

He has given up much of his time volunteering with the charity and being actively involved in its lobbying work. He is determined that people diagnosed with pancreatic cancer are able to spend more time with their loved ones.

James said: “It is humbling to receive this award. Supporting Pancreatic Cancer UK in my father’s memory is a privilege and to be recognised in this way is really special, for me and my family."

“The dire statistics associated with pancreatic cancer need to change and I am determined to do whatever I can to ensure our story is the exception rather than the rule. I had no idea what pancreatic cancer was before it devastated our lives. If we’d known the symptoms, who knows, maybe our story would be different," he added.

In Ireland, pancreatic cancer has the lowest survival rate of all the 20 most common cancers, with just seven percent of people living for five years or more after diagnosis. Pancreatic Cancer UK is taking on this tough disease through supporting those affected, investing in ground breaking research and lobbying for greater recognition of the disease.

Diana Jupp, Chief Executive at Pancreatic Cancer UK said: “We’re delighted to have presented the Pancreatic Cancer UK Purple Star Outstanding Contribution Award to such a worthy recipient. We can’t thank James enough for his ongoing support and commitment to the cause."

"His dedication to raising awareness of pancreatic cancer, lobbying for change and sharing his own personal experience has been invaluable in helping Pancreatic Cancer UK communicate the importance of its work to parliamentarians and policy makers," she concluded.