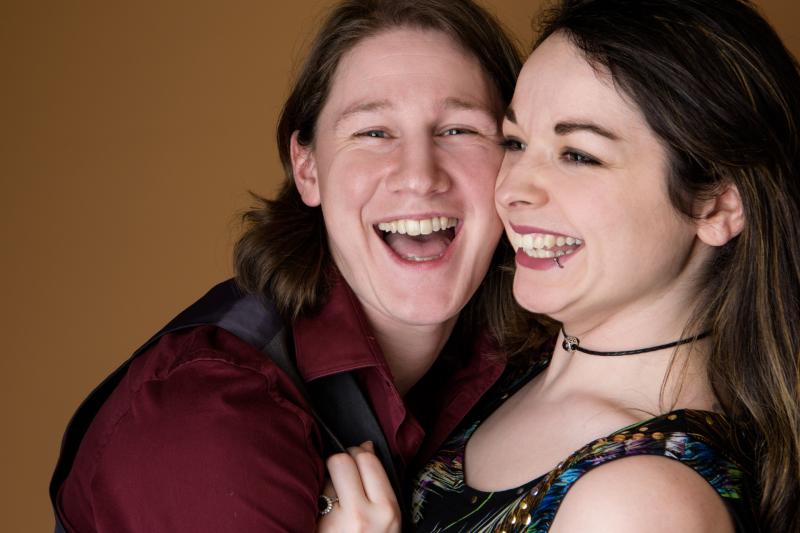 A couple from Rosemount on the Offaly/Westmeath border, who met under unusual circumstances in Co. Offaly, have shared their extraordinary story to raise awareness for Organ Donor Awareness Week (April 1-8). The couple, Ken Byrne and Aine O'Keeffe, who are engaged to be married, told their story to Ryan Tubridy on Friday night's Late Late show.

They share a truly unique and close relationship having met under hilarious circumstances. Six years ago, Áine was hunting with a local hunt in Rahan Woods, Co. Offaly, when a young man with a camera caught her eye. Trying to impress him she made for a large ditch hoping to create a truly amazing image. Her performance didn’t go so well as she made an abrupt landing face first to the ground. Rather than let him know she was hurt she shouted to ask, "Did you catch that?" to which he laughed and gave her a thumbs up.

A romance blossomed and the pair now live in Rosemount with their two children, but their lives have been touched illness, something that made Ken very sick until very recently. January last, the start of this New Year also brought the long awaited chance of a life time for Ken Byrne, thanks to his living partner.

On January 15, 2017, a seemingly fit and healthy young couple eagerly stepped through the doors of Beaumont Hospital. It was a place they had become very much accustomed to over the past few years. But this time was different. They were both about to undergo their long awaited living donor kidney transplant surgeries which were scheduled to take place the following morning.

Aine O'Keeffe, a 24-year-old Kilbeggan native, was excited to donate her kidney to her fiancé, Ken Byrne, a 33-year-old Rosemount native. They had been together for six years almost to the day of their scheduled surgery. They work together and live with their two children Keelin and Fía in Rosemount.

Being photographers Ken and Aine had always tried to see the beauty in life but for the past few years Ken had been silently suffering. Diagnosed with kidney disease when he was only 17, he learned that he too might follow in the footsteps of his father, Anthony Byrne, and like his father would eventually require dialysis treatment or a kidney transplant.

Anthony had a troubled health history with an emergency kidney transplant when he was in his 30s and shortly after the operation he was hospitalised for over three months due to complications. He has been undergoing different types of dialysis treatment over the past 12 years including a form of home dialysis, then progressing to hospital based haemodialysis which involved journeys to Beaumont Hospital three times a week for treatment before eventually returning to a home based treatment.

Seeing his father’s struggles only spurred Ken on to seek an explanation for what he considered to be a family curse. Finally in 2013 their family was tested and research in America revealed that they had a very unique UMOD gene, which is a defective protein in the kidney. Having finally found an answer to their condition they were still no closer to finding a cure and Ken would still require a donor kidney. Three years previously Áine and Ken attended a meeting at Beaumont Hospital with Professor Peter Conlon when Áine volunteered to go forward and donate one of her kidneys to Ken.

Aine explained, "When people ask me why I decided to give Ken one of my kidneys the answer is simple. It’s Ken, My Ken! I couldn’t be without him and I couldn’t imagine him being tied to a dialysis machine like so many others. I want our children to have a healthy Daddy, one they can play with and not have to be careful around. I know in my heart he would do the same for me. I did it willingly and he didn’t have to ask.”

Despite just a few complications following the transplant surgery in which Ken’s immune system required a cocktail of medication the couple made a speedy recovery. Ken says of his experience, "I haven’t felt this good since I was 16. I can actually think clearly, look at light and truly enjoy life again. What Áine has done for me is indescribable. She is my queen and I cannot wait to marry her! I have my life back, Áine by my side, our children in tow, a camera in my hand and a bright future in front of us. So bring it on!"

The couple shared their transplant success and love story on Facebook when Ken returned home from hospital three weeks after Áine. Their post, which was shared on their Facebook photography business page (Ken Byrne Photography) reached over 30,000 views revealing to the public their secret battle and raising awareness about organ donation.

Aine stated, “You don’t have to be Superman to save a life, there are heroes all around us. We are all capable of saving others and all it takes is to carry an organ donor card or tell your family your wishes to be an organ donor so that others on transplant waiting lists might receive the gift of life. You only have to walk the halls of Beaumont Hospital to see people in need of life saving transplant. Rather than bringing your organs with you to your grave you might be able to save someone else’s life."