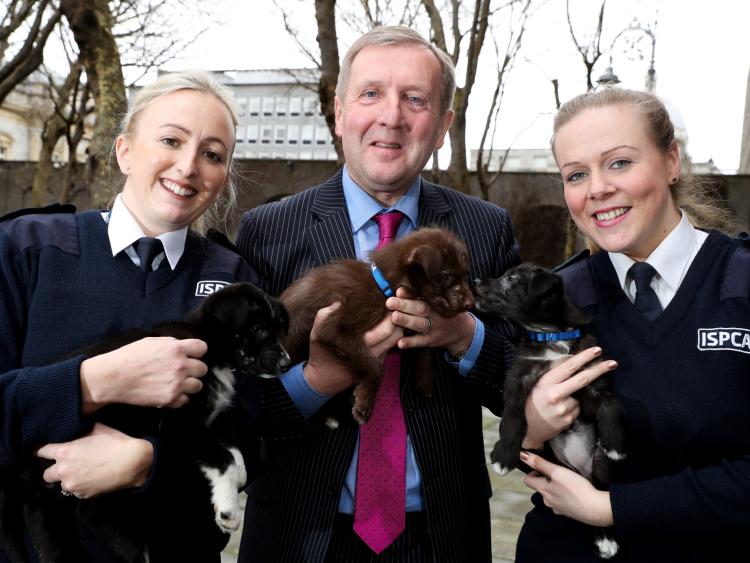 The Animal Health and Welfare Act (AHWA) came into force three years ago on 6th March 2014.  Since then the ISPCA National Animal Cruelty Helpline has received over 53,000 calls.

ISPCA Inspectors have carried out 11,065 investigations and over 2,795 animals were seized or surrendered. A total of 92 prosecutions have been initiated, 25 of which have been finalised in court to-date.

The Irish Society for the Prevention of Cruelty to Animals (ISPCA) is today highlighting the constant demand on resources and the difficult and often horrific scenes of animal neglect and abuse encountered by ISPCA Animal Welfare Inspectors.  With 90% of ISPCA income received from public donations and through gifts in wills, the ISPCA rely heavily on public support to continue their vital work preventing animal cruelty and alleviating animal suffering.

Today the ISPCA launched their 2016 Inspectorate Report at the Department of Agriculture which focuses primarily on animal cruelty prosecutions initiated by the ISPCA which were finalised in the courts in 2016.

The report outlines 16,312 calls were made to the National Animal Cruelty Helpline resulting in over 3,200 investigations, 995 animals were seized or surrendered, 32 prosecutions initiated resulting in 15 finalised in court, compared to nine in 2015.

ISPCA CEO Dr Andrew Kelly said,  “The Animal Health and Welfare Act 2013 which came into force three years ago was a significant step forward for animal welfare in Ireland, but like any legislation it is only as good as its enforcement. Our Inspectors became authorised officers under the AHWA in May 2014 and since then have used their statutory powers effectively to deal with animal neglect, cruelty and abuse. In 2016 alone, our Inspectors initiated 32 prosecutions and saw 15 finalised in court with successful conclusions. Although we would like to see stronger penalties for animal cruelty to act as a deterrent, we would like to get the message across that all animal owners and anyone who looks after animals have a legal obligation to provide them with their welfare needs. Failure to do so will result in them being held to account. The ISPCA will not tolerate animal cruelty and will do all that we can to stamp it out in Ireland. However, we currently only have eight Inspectors covering 17 counties. Our resources are stretched to breaking point and we need more Inspectors on the ground dealing with animal cruelty. Our aim is to recruit enough Inspectors to cover the whole of the country and we would like to appeal to the animal loving public to help us with this work.

"I would like to take this opportunity to ask the Government to support the ISPCA in our fight against animal cruelty both financially and through legislation.  As our services increasingly become stretched to capacity I would also like to call upon the Irish public to continue to support the good work of the ISPCA in any way that they can - by looking at our website to make a single donation or consider becoming regular donors."

Minister Michael Creed, who officially launched the Inspectorate Report on behalf of the ISPCA said: “The Department of Agriculture Food and the Marine fully supports the ISPCA Inspectorate team and congratulates them on their work investigating allegations of animal cruelty to domestic animals. The Animal Health and Welfare Act 2013 (which provides for authorisation of ISPCA Inspectors) is now three years in operation and  I look forward to the ISPCA’s  continuing engagement with my Department in order to ensure that animals are protected and that those responsible for neglecting, abusing or cruelly treating animals will be dealt with robustly. I would like to remind any person who owns or keeps animals that the Animal Health and Welfare Act places a legal responsibility on them to provide for the welfare needs of all animals”.