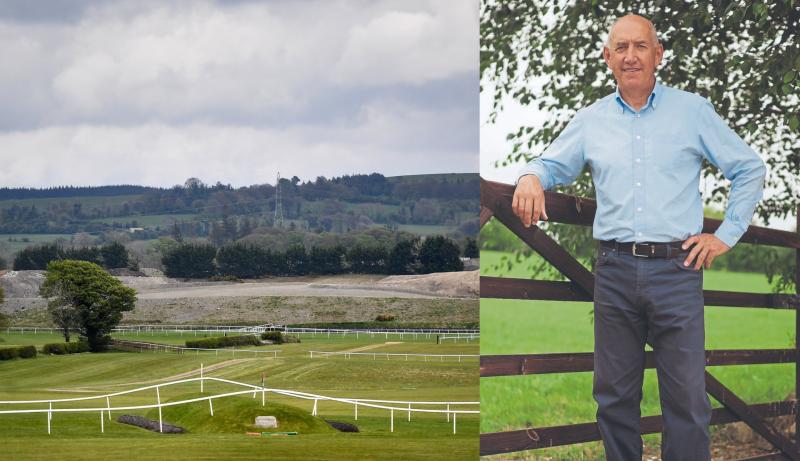 Brendan Sheridan was walking home from school one day when he spotted a pony in a not unfamiliar location, the horse yard of Ruby Walsh, Ted's father and grandfather of the Irish National Hunt legend that shares his name.

“I went in and asked him if I could ride the pony and that's where it all started. After that I went down every weekend. I began riding out properly and worked for 25 years or so before I retired to work as a racing official,” Brendan explained.

Brendan had an interest in racing from an early age, ignited by family trips to Punchestown. Between growing up in Kill near the Walsh’s and his father working at the track it was only a matter of time before Brendan was hooked.

“We would all go racing as a family to Punchestown. My dad would be working one of the fences and I would be down the track hoping to catch a loose horse to ride him back up. I would run for miles to catch a loose horse and get a spin off him on the way back — not knowing that I was going to be a professional jockey one day — I had the bug for racing from a very young age,” Brendan recalled.

“Punchestown is a wonderful track. A great place for horse and jockey. It’s the creme de la creme of jumping, it has everything. I loved it as a kid, as a jockey and now as an official.”

Brendan’s interest was piqued by a place he would become Clerk of the Course at years later. After getting his start with the Walsh’s, Brendan remained with their yard in Kill as his base until the day he retired.

Brendan scored some big wins with them too, such as Barney Burnett and Roc de Prince, the latter of which he won the famous Thyestes Chase at Gowran Park.

Brendan’s career also included riding horses for Dermot Weld over jumps and with great success too. But even that optimistic 10 year old that walked into Ruby Walsh’s yard all those years ago couldn't have imagined the level of career success he would have from asking for a pony ride.

One of the biggest dreams for any jockey is the Irish Grand National and as Brendan mounted Perris Valley ahead of the 1988 instalment of the National he felt he had a decent chance of a performance.

“He had a good each way chance, he was a horse you had to take your time on and he gave it a real good gallop. Like a lot of those races you need a bit of luck and I was fortunate enough to be there at the right time,” Brendan said.

Brendan was too modest to give himself more credit than that moment may have been worth but he was perfectly honest about coming up just short against Desert Orchid two years later.

“I rode Barney Burnett to be second to Desert Orchid. He won the Irish National and everyone was saying how great it was that he stood up at the last after making a very bad mistake. Everyone was delighted he stood up and won because he was a great horse. I wasn't delighted, I was hoping to win my second Irish Grand National but that didn't happen.”

1990 was far from all doom and gloom for Brendan and Dermot Weld. Before the near miss of the Irish National, the pair were in Cheltenham and felt their 25/1 maiden Rare Holiday had a great chance in the Triumph Hurdle to open the final day of the showpiece event.

“Dermot (Weld) quietly fancied him. We went there with an each way chance, there were 30 runners so a lot of traffic but it worked out for me. It was an unbelievable feeling, it is every jockey's dream to ride in Cheltenham never mind be able to ride a winner there.”

A summation of a career that amassed what Brendan calls “the guts of 500 winners” is difficult but to be able to look back on wins in an Irish Grand National, Triumph Hurdle and Powers Gold Cup is satisfying for any jockey.

Towards the end of his career Brendan became aware of life after riding and an ad in the paper for a position in the Turf Club gave him pause for thought.

“I applied and I was lucky enough to get through the interview process and get the job. I was 35 years old, at that time it was a good age and I was still riding and getting plenty of winners. I wasn't riding the same calibre of horse as I had been in my earlier days but I was still enjoying it.

“I had a bit of time and I chatted with my wife Anne-Marie and we decided if I got the job I would stop riding and it would be a way to keep me in the game” Brendan explained.

The Kill native is now Clerk of the Course at six Irish racecourses. Overseeing and assisting the management of each track throughout the racing calendar.

“There's a lot of work in it, the ground staff at these places don't get half enough praise for the work that they do. It is a job where you’ll never please everyone because some people want quick ground and some want slow,” Brendan described.

“Our job is to try to have the ground as safe as possible for horse and rider. I do inspections and I am Clerk of the Course at many different tracks so on January 1 you have to plan out your entire year with the management and ground staff of those different venues. But it’s great to be still involved in racing and get to work with some great people.”