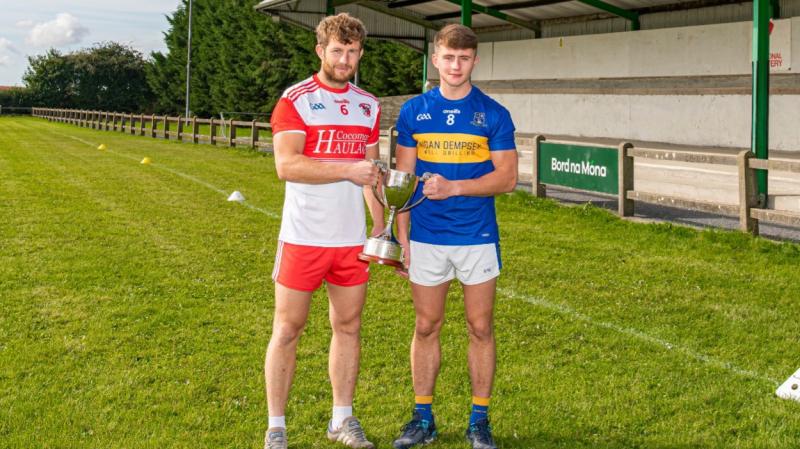 Pictured ahead of the Tullamore Court Hotel Offaly Senior 'B' Football Championship final at O'Connor Park next Saturday were Ian Curry of Clonbullogue and Stefan Geoghegan of Bracknagh.

BRACKNAGH may have punched at a higher grade for a good few years but Clonbullogue will be very much fancying their chances when they take on their parish neighbours in the Tullamore Court Hotel Senior “B” Football Championship final next weekend.

On the surface, Bracknagh should be favourites, and warm ones at that. They are in their first year back out of senior football after being up there for a couple of years and in Peter Cunningham, they have one of the best and most talented footballers in Offaly.

They have been used to operating at a higher level than Clonbullogue, albeit with very little between them, for many years and Bracknagh will also know the importance of getting back up at the first attempt – history is littered with examples of teams who have extended periods in a lower grade if they don't bounce back immediately.

Bracknagh were probably the starter's favourites for the championship but the pendulum has swung in Clonbullogue's favour and they will be many people's tip for this final.

Clonbullogue won the Intermediate Football Championship last year after decades of trying. That was a huge win for them, a very significant breakthrough. Clonbullogue have a great tradition of producing talented, good footballers but this is the best team they have had in memory.

They have some outstanding young footballers. They have one of the best attacking talents in Offaly in Keith O'Neill but they are far from a one man team. They have real momentum behind them and it is a great achievement to reach this final the year after winning intermediate.

Clonbullogue went on to win the Leinster Junior Football Championship last year and the quality of their football, their attacking play has won them many admirers. There have been loads of examples down the years of clubs getting promoted in successive years and that is within touching distance for Clonbullogue now.

They will, however, be very wary of the Bracknagh challenge. They know everything about their neighbours and vice versa. There is a long standing, quite ferocious rivalry between these two neighbouring clubs. The players from both clubs may be friends with each other and may have grown up playing underage together with St Broughan's but make no mistake about it, this is a game both would absolutely love to win and they dread the thoughts of losing it.

It will be a fiercely contested battle, not for the faint hearted and it is pretty close to a 50-50 game. Both sides have injury problems. Bracknagh have been without Tom and Eoin Hyland for the campaign and they are big losses to them. Tom Hyland did a great job when put in at full back for Offaly U-20s when Kieran Dolan got injured in 2021 and he would have been charged with marking one of Clonbullogue's danger men.

Clonbullogue also have problems. Their two best forwards, Keith O'Neill and Jamie Guing did not start in the semi-final against Tubber as they manage injuries. Both played pivotal roles in their win when introduced off the bench – Guing, on the Offaly U-20 team this year, got 1-5, 1-3 from play, while O'Neill got a point as well as moving with real menace.

Unfortunately O'Neill went off injured near the end of extra time and there are real doubts about his fitness. The flying forward is in trouble with a hip injury and he did not look comfortable against Tubber. He was still very good but he is struggling with injury. O'Neill probably shouldn't be playing football at the moment and should be focusing on his long term future but his desire to play and Clonbullogue's need for him is understandable.

O'Neill has huge drive and desire and wants to win while Clonbullogue know that their prospects are much greater with him on the field, even if it was only for half an hour.

It should be an excellent game of football and it is no surprise that Clonbullogue and Bracknagh have qualified. They have shown feet of clay at times but they have been the two best sides in what is a very good championship.

Clonbullogue qualified direct for the semi-finals by topping group one. They edged out Tubber by a point in their first game and then had a bad day at the office when losing to Erin Rovers, who were later relegated. A 4-12 to 1-11 win over another parish team, Walsh Island earned them top spot on the head to head rule.

Bracknagh also topped their group and they are unbeaten. They had two points to spare over Gracefield in the first round, beat Ballycumber on the remarkable scoreline of 0-8 to 0-2 and then received a walkover from St Rynagh's in their last group game.

Both sides required extra time to get through the semi-finals. Clonbullogue were in trouble against Tubber into the second half but as expected, the introduction of Guing and O'Neill changed the tide in their favour. They got the final three points to draw, 1-9 each, and then powered home in extra time, 2-17 to 1-12.

It was a similar story in the other semi-final. Warm favourites against Walsh Island, Bracknagh were way below par for much of the afternoon, flirting with a devastating defeat. They were four behind inside the closing quarter but rallied very well to force extra time. In extra time, Walsh Island's legs went and as expected, Bracknagh had the youth and vigour to get home, 3-11 to 0-12.

The final scoreline in both games does not reflect how close both came to losing. This final is very close to 50-50 and Bracknagh have a great chance of winning. Clonbullogue won't hold any fear for them and in Peter Cunningham, they have the single most important player in this final.

Cunningham wasn't at his best against Walsh Island but still scored four points, three from play and one mark. If he clicks into his best form, he could win this final for Bracknagh and even if he is tightly mark, he will still contribute well.

Clonbullogue will probably be without Darragh Hickey and Peter Byrne. Both came on as subs the last day and were sent off in a late melee. The Clonbullogue bench is strong whole Bracknagh introduced good subs in Jim Hendy and Robin Galraith against Walsh Island.

While Keith O'Neill and Jamie Guing are very important to them, Clonbullogue are not as reliant on one individual as Bracknagh are on Peter Cunningham. That is to their advantage – Ruari O'Neill is a very composed, consistent performer in their attack while Shane O'Brien is capable of shooting the lights out on his day. Lee Dempsey came on as a sub the last day – he was outstanding a few years ago when Clonbullogue won junior and he could do damage close to the goals.

It should be one of the games of the year. There will be huge passion and excitement with supporters wound up for this one. A Bracknagh win would not be a surprise but Clonbullogue do look to have a slight edge at the moment.