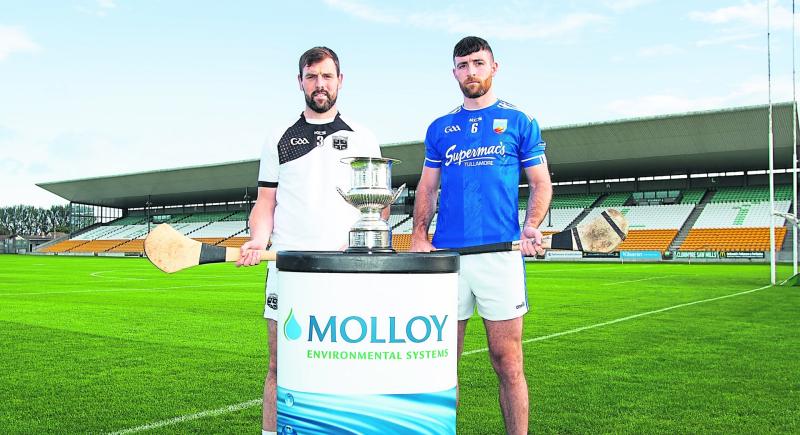 Pictured ahead of the Molloy Environmental Systems Offaly Senior B Hurling Championship final in O'Connor Park this Sunday were Clara captain, John Ledwith, and Tullamore captain, Ger Crowe, with the

THERE will be huge local interest in next Sunday's Senior “B” Hurling Championship final between Tullamore and Clara.

It is a real 50-50 game between two clubs who have gotten to know each other very well over the past two years. At first glance, Tullamore will be favourites in many people's eyes. While Clara have a long standing hurling tradition and that game was their first priority before football took over from the 1950s on, Tullamore have punched at a much higher level for years.
They won their last Senior Hurling Championship less than fifteen years ago in 2009, competed at senior level for several years and are very hungry to get back up to the top grade.

Yet they will be extremely wary of Clara. They just barely beat them in the group stages last year and had to work hard to get past them in the semi-final – Tullamore were beaten by Clodiagh Gaels in the final. This year Clara turned the tables in the group stages, recording a great win – though the first half dismissal of Tullamore's star forward Shane Dooley was a big factor in this game.

Clara's form has been a little bit better, a bit more consistent than them this year. They haven't blown as hot and cold and on results alone, Clara are favourites.

It is, however, not as simple as that and this one is very hard to call. Clara have performed really well this year. They lost by 2-15 to 2-13 to Kilcormac-Killoughey in their first group game and then hit a rich vein of form.

Clara lost 2-19 to 1-18 in their last game but that result didn't matter a whole lot – Drumcullen had to win while Clara were through. They produced their best game of the year to beat Birr by 0-18 to 1-9 in the semi-final.

It wasn't a flawless performance. Clara hit a whopping fourteen wides in the first half but were much more clinical in the second half as they pulled away for a convincing win.

Tullamore have come into the final on the seat of their pants. They started well with a 3-15 to 1-15 win over Lusmagh and a draw with Drumcullen, 0-18 to 2-12, kept them ticking along. Successive defeats by Birr (2-16 to 3-12) and Clara almost derailed them and they faced Kilcormac-Killoughey in a must win closing game.

Tullamore almost bowed out here. They won by 2-15 to 0-20 but Adam Cleary saved a penalty with almost the last puck of the game – Tullamore would have been gone if K-K had tapped the penalty over the bar. Even as it was Tullamore hung on by a thread as scoring difference got them in ahead of Drumcullen – Tullamore's difference was just marginally superior, +5 compared to +3.

K-K paid a dear price for not putting Tullamore out when the sides renewed acquaintenances in the semi-final. K-K led by seven points at one stage but Tullamore came back to force extra time, where they triumphed by 3-27 to 1-31.

It is not exactly the form of champions but in some ways, Tullamore are in the ideal position for this final. Not that it makes any real difference but they can paint Clara as favourites and outside of their own set up, the wider expectations about them won't be particularly high.

Both clubs have a similar outlook on hurling. Football is the first priority in both but they also have hugely devoted, passionate hurling sections. They are both hungry to get to the top flight and see how they get on.

Tullamore don't have everyone they would like. Diarmuid Egan opted to concentrate on football this year and his brother Cormac has missed all the action so far with a hamstring injury – he has returned to football action in recent weeks. They also changed management in the weeks before the championship started with Edwin Finnerty coming in as manager.

Yet they have shown great character to reach the final. Tullamore have a lot going for them. They have two vastly experienced forwards in Shane Dooley and Shane Kelly. While both are in the end stage of their careers and their legs can't do what they once did, they remain very potent players and Clara will be earmarking special attention for them.

Twins, Dan and Mike Fox have been in great form for them and Tullamore have a very solid, steady group of players.
Clara also have a huge amount going for them and they have a younger team than Tullamore – which can be both an advantage and a disadvantage. Goalkeeper Marius Stones is their most experienced player and they have a lot of very good young hurlers. Their star player is forward Josh Fleming, a skilful exciting player; Cathal O'Meara has featured on Offaly underage panels; Cormac Delaney, Marcas Dalton and Ed Cullen have played U-20 and minor football for Offaly.

Their football pace and power is a great asset to Clara and they have a great chance here.

Both are hoping to have players home from Dubai for this: Ciaran Doyle of Clara and James Houlihan of Tullamore. This resulted in both sides making cases to the CCC for a specific date for the final – Clara wanted it on Saturday, Tullamore on Sunday. The CCC eventually decided to toss for day and Tullamore got the Sunday.

Both will be very familiar with O'Connor Park and we can expect an excellent game. There is a strong case for going with a Clara win and they are slight favourites. However, there has been something strangely compelling about Tullamore this year. The way they have extracted themselves from tight corners, the character they have shown.

If both teams play as well as they can, Clara could make it but there just may be another big day in Tullamore.