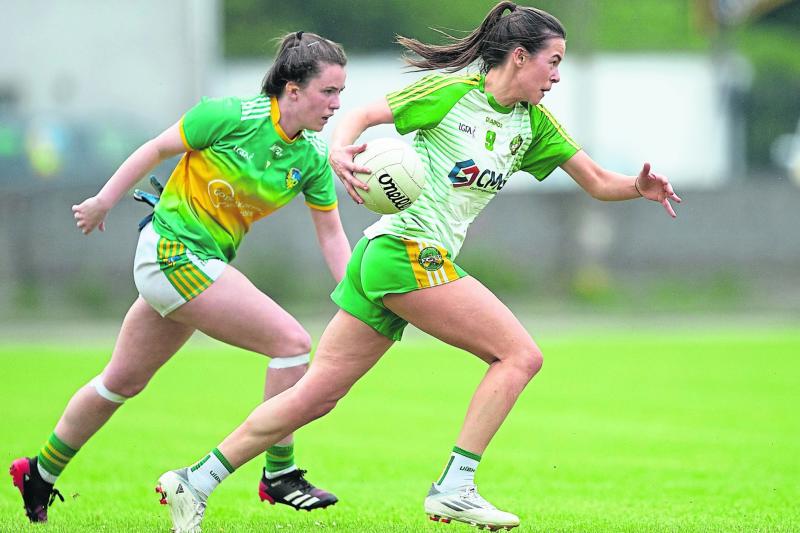 Offaly’s Amy Gavin Mangan in action against Leitrim . She will be in action for her club this weekend

In the Intermediate, St Broughan's face St Manchan's and Shamrocks take on neighbours Ballinamere/Durrow while in the senior semi finals, Naomh Ciaran will take on St Rynagh's and Tullamore take on Edenderry.

St Broughan's v St Manchan's, Bretland Park, Clara, Saturday at 6pm.
This game is setup to be one of the games of the weekend with both sides very evenly matched, so much so, they drew in their group stage clash on the opening day of the championship.

Both sides have a wealth of experience amongst their ranks with the likes of Kym Furey and Aoife Carey among the Broughan's attack coming up against players of the quality of Anne Marie McCormack, Saoirse McGuinness and Therese Robbins for the Ballycumber/Tubber amalgamation, this will be a closely contested affair.

Shamrocks v Ballinamere/Durrow, Bretland Park, Clara, Sunday 6.15pm.
In the other semi final, neighbours Shamrocks and Ballinamere/Durrow go head to head in what will be a derby clash for these sides having a lot of players attended schools together.

The form of Shamrocks hasn’t went unnoticed in Ladies football circuits within Offaly and they will be looking to take their extraordinary goal scoring form into this clash and keep their unbeaten campaign alive.

For Ballinamere/Durrow this will be arguably be their biggest game to date, having only formed an adult team a couple of seasons ago, winning a Junior and competing well at Intermediate level since.

They will need huge performances from their county players Roisin Mealiffe, Emma Hand and Saorah Doyle and even with these three on top form it’s hard to see them get over Shamrocks, however a massive upset may well be on the cards and do not be surprised if it happens.

On Saturday morning Naomh Ciaran look to reach another final and to try regain their title when they meet near neighbours St Rynaghs.

St Rynagh's are a team in transition, following a successful time for the club in the early 2010’s adult football declined in the Cloghan/Banagher area for a few years, but made a very welcome return to senior football following their 2020 Intermediate success.

Mairead Daly and Linda Sullivan are the marquee stars for the Rynaghs ladies and they will have to be at top gear along with huge performances from the players around them in order to cause the upset they wish to.

Naomh Ciaran are a hurting outfit, having lost their crown in 2021 to Tullamore, the West Offaly outfit are out with a vengeance to reach the decider and try regain their crown.

Roisin Egan and Kate Kenny have been notable absentees from the team in recent weeks, Egan is travelling for work in Dubai and Kenny has had a niggling injury to deal with, albeit the latter may feature come Saturday morning.

Even with out these players, they have serious quality amongst their squad with Ellee McEvoy and Roisin Cockram in good form throughout the campaign so far while other county stars such as Amy Gavin-Mangan and county captain Roisin Ennis leading the charges.
Verdict: Naomh Ciaran

Tullamore v Edenderry, Bretland Park, Clara, Sunday 4pm
In the battle of the towns, Tullamore will be hoping to reach the decider once again as they aim to defend and win the title for the second season in a row.

Edenderry have yet to produce a performance that would suggest that they may be title contenders, but one can never write off the Reds at this level and no doubt will be looking to take a major scalp here.

Aided by the return from America of Tara Dunne, along with Becca McDonnell and Ciara Brady in attack, and experienced county defenders such as Orla Whelan and Nicole Farrelly in the defence, Edenderry will be looking to hit top form here.

A young Blues side have really been making steady progress once again this year and along with experienced heads such as Annie Kehoe, Maebh Coleman and former county star Grainne Egan they should have enough in the tank here.

This should be a really interesting clash, however the Tullamore ladies should have enough to win by a couple of points here.
Verdict: Tullamore