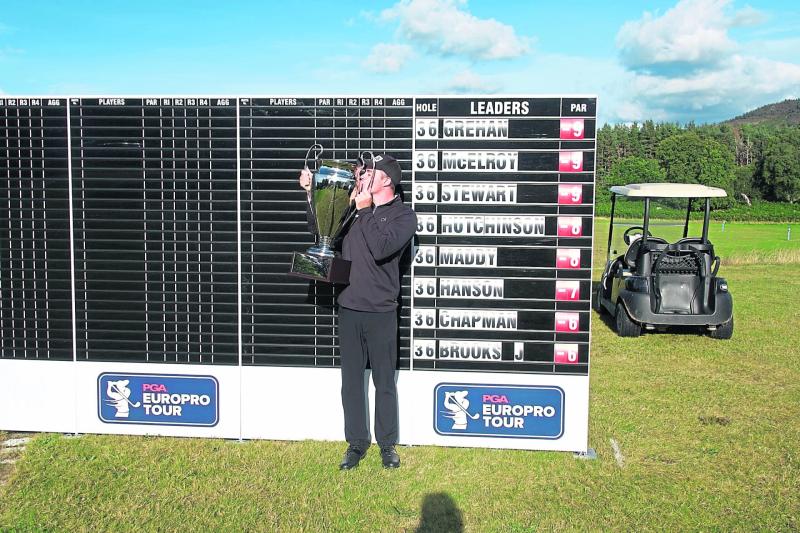 Stuart Grehan with the trophy after his win in Scotland.

TULLAMORE golfer Stuart Grehan has notched up another big win with victory in dramatic fashion after a seven hole play off at a tournament in Scotland last week.

During the Summer, Stuart recorded an impressive victory at the K-Club Pro Am, which was a big boost to his career.

Last week he was competing on the EuroPro Tour at Spey Valley Golf Club in Scotland. The event was impacted by torrential rain on Thursday and consequently was reduced from a 54 hole event to a 36 hole tournament.

Stuart Grehan shot a four under par 67 on Wednesday to lie three off the lead and still very much in contention.

He was three under par for his round and seven under for the tournament half way through his second round on Thursday when rain forced the players off.

When play resumed on Friday Stuart parred the first seven holes of his back nine before an eagle at the 17th left him in a three way tie at the top of the leaderboard.

He had a chance at the 18th to go into the outright lead but his birdie effort was short and he finished in a three way tie with fellow Irish golfer Dermot McElroy and Scotland's Michael Stewart.

The trio began the play off, which featured the 1st and 18th holes and Michael Stewart had a chance to win at the first play off hole but missed the chance and the players moved on to the 18th which all three parred. Back on the first Grehan and McElroy birdied with Stewart only managing a par and he was eliminated from the play off.

The two Irish golfers continued matching each other over the next three holes before finally on the seventh play off hole, Stuart Grehan birdied and McElroy could only par giving victory to the Tullamore man.

Having featured on the PGA EuroPro Tour during the last four seasons, Grehan was “delighted” to record his first win.

“I was quite comfortable throughout today, to be honest,” he revealed after reflecting on his victorious afternoon.

“I actually had a chance on the 18th to get the win, but unfortunately it did not happen.

“I’m just delighted to get through that seven-hole playoff; I had a few chances to win, but I am delighted to finally get over the line.”

Considering his victory has moved him to 9th in the Order of Merit, the Irishman is fully aware of the magnitude of the final three events.

“Obviously I want to try and kick on and with the Tour Championship at Lough Erne – which isn’t too far from where I’m living – I’ll have a decent look around there.

“The win doesn’t change anything; it’s just a confidence boost for me.”

With only three events remaining in the 2022 season, Grehan is hopeful that his fine form can help earn him a Challenge Tour card for next year.

“It would mean a lot to get onto the Challenge Tour; I have had a tough couple of years, and it would mean so much to get there.

“To win, even though it’s a 36-hole event, means so much – I’m very excited about what the future can bring.”

The PGA EuroPro Tour will remain in Scotland for the penultimate event of the regular season, with Leven Links playing host to the Eagle Orchid Scottish Masters.