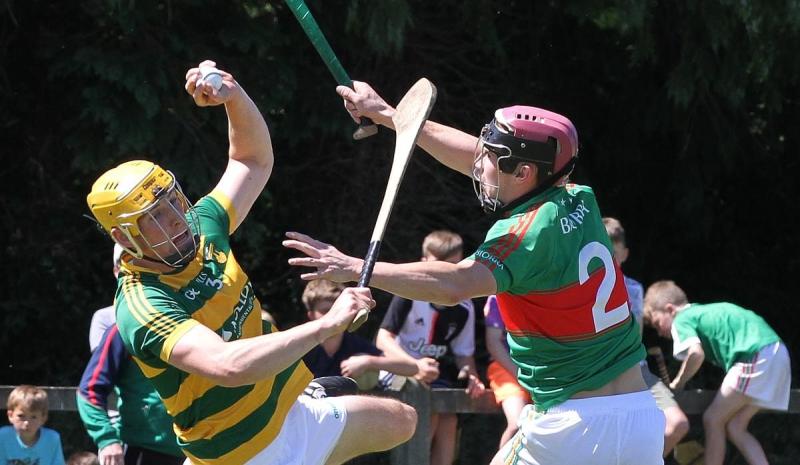 Ballinamere and Birr clash in a mouth watering SHC Q/F this weekend.

THE Molloy Envioronmental Systems Senior Hurling Championship will really spring to life this weekend with the two quarter-finals and a big relegation play off all down for decision.

Stuttering champions St Rynagh's will put their title on the line against Shinrone while the quarter-final between Birr and Ballinamere could provide one of the games of the year.

In normal circumstances, Birr would be red hot favourites to beat Ballinamere but we are in the 2020s now, not back in the 2000s and this looks to be as close to a 50-50 game as you can get.

Birr are not the all conquering powerhouse that they were back then, far from it, while Ballinamere have improved significantly and are very much in the upper tier of Offaly club hurling.

History makes it very hard to make Ballinamere favourites for this but there is a case for doing so. In Ciaran Burke, Ross Ravenhill, Brian Duignan and John Murphy, they have players who have begun to establish themselves on the Offaly senior hurling team.

Eoghan Cahill is the only Birr man established at the moment and that is a fairly dramatic change in a few years.

Because of history and other factors, you just can't make Ballinamere favourites at the moment but they have a mighty chance of advancing to the semi-finals.

They have done very well this year, beating Coolderry and Seir Kieran, drawing with Shinrone and losing narrowly to Belmont. Their win over Coolderry was particularly significant as they had to show great character to get a result over one of Offaly's great clubs.

Birr have blown hot and cold but their results went almost exactly as expected. They lost to Kilcormac-Killoughey and St Rynagh's in their first two group games and wins over Clodiagh Gaels and Kinnitty put them into the semi-finals. They did well to beat Kinnitty by 1-14 to 0-12 as this was a pure winners take all knockout game but there was little in their display to frighten Ballinamere.

Birr are in a period of transition. They have some good young players and Lochlann Quinn is a definite addition to their attack. Brian Mullins, Paul Cleary and Sean Ryan are all still starting, despite being very much at the tail end of their senior careers. They haven't ready made replacements for them and at the moment Birr need them – apart from their leadership qualities, Birr have a fairly light team and their physicality is a help to them.

They do have the most prolific forward in Offaly in Eoghan Cahill and he will give them a chance against every side at this level.

If both teams play as well as they can, Ballinamere might be able to edge it but there are doubts about them. They are entering new territory and are not used to this sort of expectation. They are well capable of producing a win but we really don't know how they will perform. It's a hard one to call but Birr could have a sting in their tail.

Both St Rynagh's and Shinrone have a major point to prove in this quarter-final and it will be very interesting to observe it all unfold.

They are coming into the game with serious questions to answer, some less than spectacular form. St Rynagh's are aiming for four in a row and have been incredibly consistent over the past four few years.

They have, however, looked more vulnerable this year than in some time and Shinrone will tell a lot more about them. It is important not to over analyse St Rynagh's form, to read too much into it and they are well capable of igniting in the knockout stages but their form in the last two games has been questionable: A draw with Kinnitty and defeat by Kilcormac-Killoughey.

In fairness to St Rynagh's, their passage to the knockout stages was effectively in the bag after wins over Birr and Clodiagh Gaels while they have been down key, established players for most of the campaign: Ronan Hughes, Aidan Treacy, Sean Dolan and Leo O'Connor have all played very well in St Rynagh's championship wins and have been missing that year.

No team can afford to be down players like that and they will be hoping to get Treacy and O'Connor back. Dolan is a huge loss as he was at the fulcrum of the St Rynagh's team at centre half forward and it is always very difficult to replace his type of player.

There is an opportunity for Shinrone to cause an upset but they remain an enigma. They had to dig deep to beat Coolderry and earn their quarter-final place but their form in the last group game against Belmont was very poor. They were beaten 3-18 to 2-14 but were blown out of the water in the first half. They were going through but with the winners going into the semi-final, Shinrone really should have been a lot more competitive than they were.

It could have been a blip and you can expect a much different Shinrone performance in this game. There is no escape chute now and they have a good outside chance here.

At the same time, the bookmakers won't be taking a big volume of money on them after that Belmont defeat. These type of defeats and performances do inflict damage, even if it is not fatal. Expect Shinrone to give it a real go but expect St Rynagh's to have enough class and experience to get the result.

A huge game for Clodiagh Gaels and Seir Kieran who will both be very anxious to retain their top flight status. Both have tasted senior “B” hurling in the past couple of years and it was not to their liking. Seir Kieran came back up three years ago while Clodiagh Gaels won promotion last year.

This game is difficult to call. Both sides are in the relegation play off on merit, even if they battled very hard in the group. A lot will depend on their attitude, desire and fight here and we just can't be certain of how either will perform in this regard.