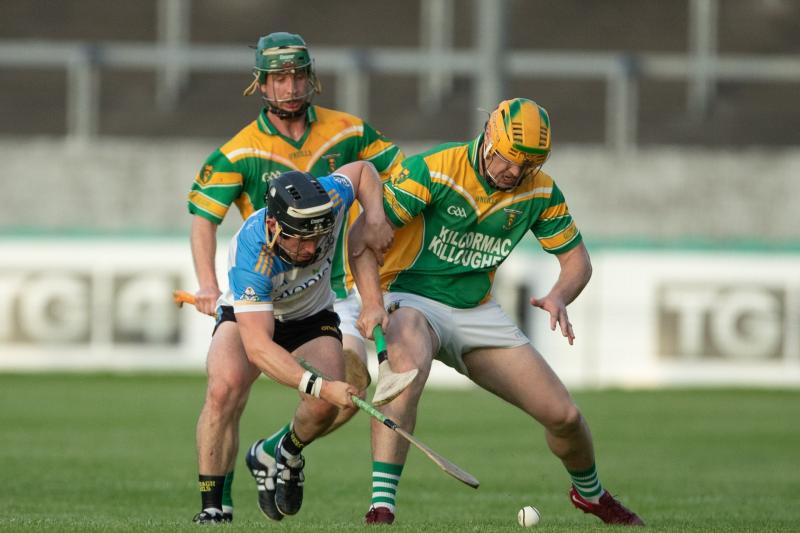 Cathal Curran and Clodiagh Gaels face a daunting must win game against St Rynagh's this weekend.

IT is all getting very serious, very quickly for some teams in the Molloy Environmental Systems Senior Hurling Championship with the third round of games down for decision next weekend.

This weekend's games are critical for any team that has lost two games while they are also important for those who have lost one.

The ten teams are in two groups of 5 with the top team in each one qualifying for the semi-finals and the next next two meeting in two quarter-finals. One team has a bye in each round but Seir Kieran and Clodiagh Gaels are playing their third game this weekend after losing their first two and another defeat will put them out.

In group 1, Kilcormac-Killoughey are on course for the knockout stages with four points from two games and another win this weekend will put them through. St Rynagh's and Kinnitty both have two points from one win while Clodiagh Gaels and Birr have lost their first two – Birr have the bye this weekend.

Belmont lead group 2 with four points from two games. Ballinamere have three from two, Shinrone one from one, Seir Kieran 0 from two and Coolderry 0 from one.

There is a lot of hurling to be played yet but Coolderrry certainly won't want to lose a second ganme and their clash with Ballinamere is the standout game this weekend.

Kinnitty had an important win over Clodiagh Gaels in their first game and that has really set up their season. They are in bonus territory here – underdogs against a Kilcormac-Killoughey side who have not convinced and few will be expecting them to get anything from this.

The jury is very much out on Kilcormac-Killoughey. They are championship contenders but have plenty of work to do. At the moment, however, the results are more important than performances and they are on track for the quarter-finals.

A huge game for Clodiagh Gaels who have lost their first two and a third defeat will knock them out. It is difficult to envisage anything other than that outcome for them but they will give it a serious blast here.

Clodiagh Gaels played very well in a narrow defeat to Kilcormac-Killoughey in their last game and were unlucky to lose. Their first round defeat to Kinnitty was a disaster for them and they are now staring the relegation play off in the face. That looks like being their fate. St Rynagh's were sensational in their opening win over Birr and are hungry to win four in a row. They won't be as highly motivated for this one and Clodiagh Gaels will give it everything they have. Expect the underdogs to give the champions food for thought but there won't be much money going on an upset result here.

The meeting of Ballinamere and Coolderry is the most attractive fixture this weekend. Ballinamere have beaten Seir Kieran and drawn with Shinrone while Coolderry were blown away in the second half of their opening game against Belmont.

The defeat raises questions about Coolderry. They were very close to winning another title last year but they have a few players in their thirties. Their meeting with Ballinamere will tell a lot more. Ballinamere need to make a quarter-final this year. They have some fine young talent and are a decent side. They are, however, struggling to make the transition from a good middle of the road senior hurling side to title contenders.

They aren't there yet but a win over Coolderry would be a step in the right direction. We really don't know about Coolderry. They could be on a downward spiral or the Belmont performance could have been a blip. They are masters at conjuring up the right answers when the pressure is on, and it is on here. A Ballinamere win would not be a surprise at all but at the moment, you have to go with Coolderry's experience and know how.

A must win game for Shinrone but they will be taking nothing for granted against Seir Kieran. The Clareen men have lost to Ballinamere and Belmont and their performances command respect. They were not at the races last year but have turned a corner this year and they won't fear Shinrone.

A third defeat here will knock Seir Kieran out and they are underdogs. Shinrone are also trying to make the transition from a decent team into potential champions. They reached the semi-finals last year and competed well against Coolderry. The minimum requirement this year is a knockout place and that is not guaranteed at all in a tough group. This is a game that they can't afford to lose - it would really derail them and they should be able to survive after a tough battle.