IRELAND WEATHER: Change in weather ahead this week but temperatures are set to soar again!!!! 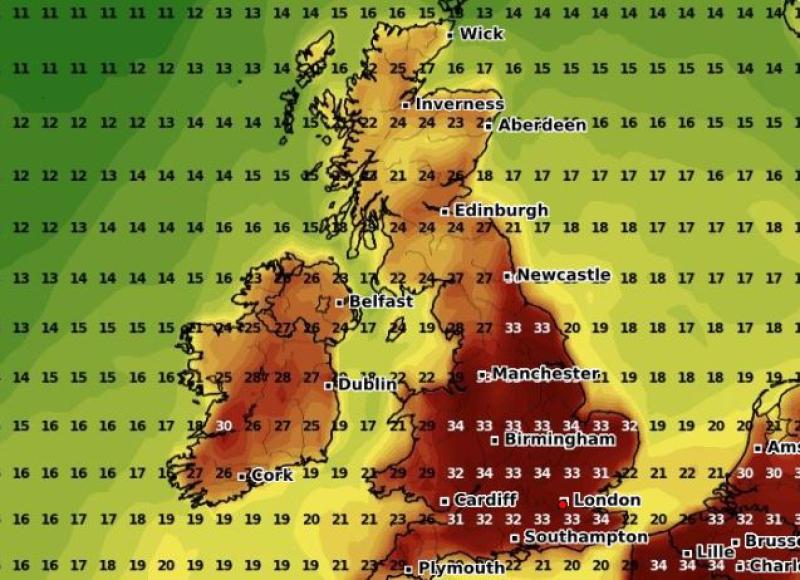 There will be a slight change in the weather this week but Met Eireann is forecasting a return of blistering temperatures over the weekend and into next week.

Temperatures are set to peak between 17 and 22 degrees for much of the week with cloud and rain around at times but Met Eireann is forecasting a return to temperatures in the high 20s from next Sunday.

According to the latest Met Eireann weather forecast, the weather will be mainly dry across Leinster and Munster on Wednesday, with spells of sunshine. Scattered showers in Connacht and Ulster but some bright or sunny spells too. Top temperatures will range from 17 to 22 degrees, warmest in the southeast, with a light to moderate west to northwest breeze.

The weather will remain largely dry with clear spells and lows of 9 to 12 degrees on Wednesday night, with mostly light westerly winds.

According to the latest Met Eireann weather forecast it will be generally dry early on Thursday with a mix of cloud and sunny spells. However, it looks set to become mostly cloudy later in the day with patchy rain affecting parts of the west and north. Highest temperatures of 17 to 22 degrees in a moderate westerly breeze.

Mostly dry with some clear spells on Thursday night. Patchy rain affecting parts of Ulster. Lowest temperatures of 11 to 14 degrees in a moderate southwest breeze.

Ireland will see a good deal of cloud early on Friday with the chance of some light showers or drizzle in parts of the west and north. According to Met Eireann, it will clear up later in the day with the best chance of sunshine in the east and south. Top temperatures ranging 19 to 24 degrees, warmest in the east of the country in a moderate southwest breeze.

According to the latest Met Eireann forecast, Saturday looks to bring scattered showers interspersed with sunny spells. A warm day with highest temperatures of 20 to 25 degrees with light to moderate southwesterly breezes.

The real change looks set to come on Sunday and early next week with plenty of dry and warm weather and daytime maximum temperatures possibly reaching the high 20's.