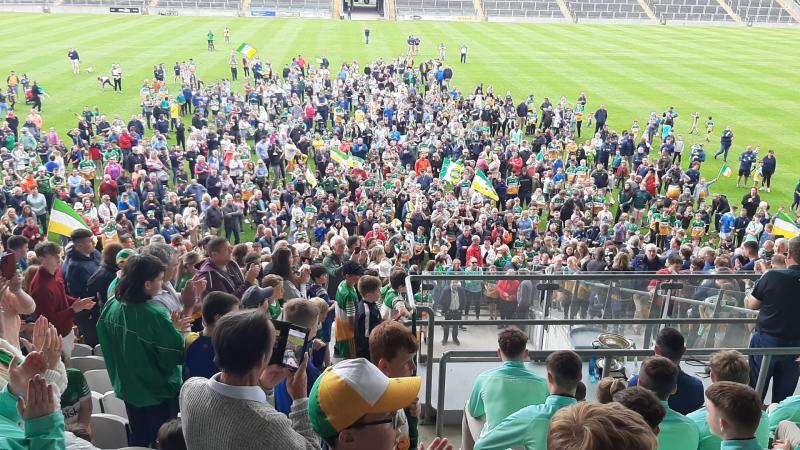 THE Faithful followers were out in force once again as thousands thronged O'Connor Park to welcome home the Offaly minor hurling heroes.

A marathon journey which had seen Durrow's Dan Ravenhill guide his warriors to victories over Kildare, Laois, Antrim, Dublin and Clare was felled at the final Furlong to Tipperary and a referee's whistle which failed to blow.

But if ever there was triumph in defeat, this was it. Perhaps never before was an Offaly homecoming as apt, as deserved, as fitting, as that which greeted the team in Tullamore on Monday evening.

The stand was ablaze with the Offaly colours and children stayed on the pitch to form a corridor of glory for the players as they made their way across the home turf.

Offaly GAA chairman Michael Duignan, who tasted defeat in an All-Ireland Under 21 final himself in 1989 before returning to claim the senior crown five years later, proved the perfect Gael to sum up a county's feelings.

In a speech frequently interrupted by applause and cheers from those gathered in tribute, Duignan described the minors as a fantastic bunch of young men.

Of course he congratulated Tipperary for their ability to keep going “until the bitter end”, but characteristically, he did not shy away from voicing his dissatisfaction.

“I think it's important to acknowledge as well that it was a very poor decision at the end of the game,” he said, a reference to how Niall Furlong hit the floor after contact with a Tipperary player just as the Tullamore youngster was about to make a potentially match winning clearance. No free out was awarded.

He stressed his remarks should not be interpreted as “sour grapes”, but emphasised that Offaly is a sporting county in victory and defeat.

Speaking as the players sat reverently in rows behind him in the centre of the stand, he added: “We have to acknowledge that that decision - and we're all human, we all make mistakes - that went against them.”

To the biggest roar of the event, he said: “These lads brought everything back today bar the cup. To me they are the All-Ireland champions.”

Offaly will be taking the positives from this year's hurling run and last year's All-Ireland victory by the Under 20 footballers, he stated.

“What these lads have in common with that great team last year is their style of play, their workrate, their fitness levels, their flair and their skill,” he declared.

“And the whole country has got behind them, the same as they did with the Under 20s last year, because they play with that unbelievable Offaly style, that for a small county, we have mesmerised the whole country for the last 50 or 60 years.”

He said Offaly hurling had been down for a few years but with players like the current bunch of minors, it was on the way back.

“They're an absolutely exemplary group of young men. Their manners, the respect they have for everybody, the way that they carry themselves.”

He reminded the crowd how they had ignored the tears and personal devastation after the final whistle in Kilkenny to sign jerseys out on the pitch.

Duignan thanked the parents, his fellow County Board officers who had come in with a mandate for change three years ago, all of the management team led by Leo O'Connor, and of course, the supporters.

In his speech, team manager Leo O'Connor recalled how he felt in 1994 when his Limerick senior team surrendered a big lead to Offaly in the closing minutes and missed out on Liam McCarthy.

“I came home to a homecoming in Limerick in 1994. We were devastated and something similar has happened tonight with Offaly.”

He explained how a decision was made at the time in his home county to form an underage academy in an effort to bring Limerick the All-Ireland they had not won since 1973.

“We worked and we worked fierce hard to get Limerick to where they are today,” he said.

He said the Offaly underage academy is beginning to work and the credit must go to the forward thinkers on the County Board.

O'Connor underlined however, that many defeats come before final victory, pointing out that Limerick lost All-Ireland quarter-finals, semi-finals and finals at various age levels from 2013 before finding the group of players who are currently unmatched by any in the country.

He also cautioned that progress to senior success will take more than work. It will also take money, and he thanked previous county GAA sponsors Carroll's and their successors Glenisk.

O'Connor told the sponsors that they were backing a special county: “I passed the cathedral in Thurles last night where there was a welcome home for the Tipperary minor hurling team and it's not half of the turnout that's here tonight.”

In a memorable moment, team captain Dan Ravenhill stood to thank the fans and introduce each member of the panel to them, roll-calling them club by club around the county.

“We definitely wouldn't have made it to that All-Ireland yesterday if it wasn't for ye,” he told the Faithful.

“Every hook, block, every score, goal, there was a roar and it definitely drove us to an All-Ireland final.”

The Durrow teenager concluded: “It was unbelievable, the atmosphere in Nowlan Park. You came in your thousands all year so thanks very much.”

As the Offaly Rover rang out around the ground and the team prepared for the next leg of their homecoming tour in Birr, chairman Duignan made one last promise: “We go again.”