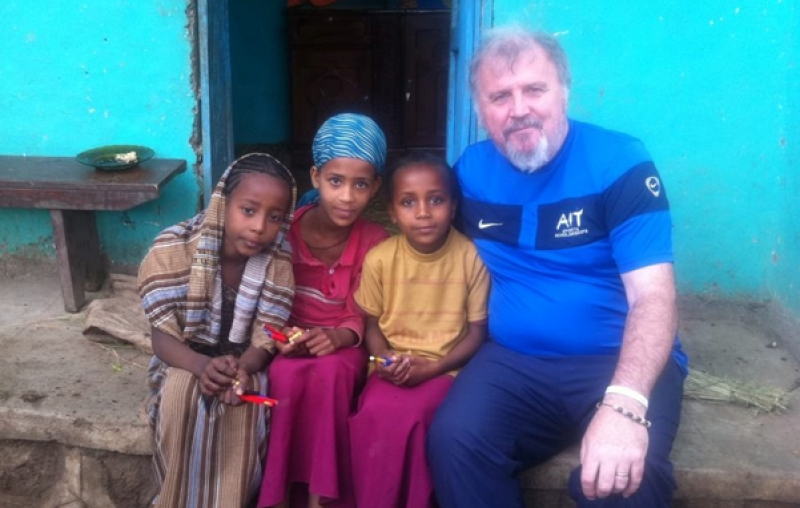 “When there is no light, shine forth. When there is apathy, show caring for another. When there is a famine, be bread to the hungry soul. When there is despair, inspire someone. When there is a drought, be a wellspring of hope. Where there is war, please make us all instruments of peace” (Ronan's Prayer for Help
More than 23 million people are experiencing extreme hunger in Ethiopia, Somalia and Kenya, according to a new report from the UN. That's up from over 10 million last year. Many parts of Africa are now in a hunger crisis which has been exacerbated by the worst drought to hit the Horn of Africa in over 40 years as well as rising food and oil prices due to the Russian invasion of Ukraine. The cost of food staples has risen sharply with grain and cereal prices up to five times their normal rates. The cost of a food basket is up 66% in Ethiopia.
These rising prices along with drought and ongoing conflicts have meant the meagre savings and the other safety nets that families hang onto, such as crops and livestock, are long gone. Three consecutive dry seasons in East Africa have forced hundreds of thousands of people to leave their homes, caused the death of millions of livestock and the destruction of crops and livelihoods. Children are particularly vulnerable to acute hunger and malnutrition and there are now 10 million children facing severe drought in the Horn of Africa, according to UN and INGO sources.
These are children like the two young daughters and son of Lilian Kura, a small-scale farmer from Kadogoi village in northern Kenya, who described to a colleague of mine recently how she had endured successive years of drought, and was sending her children to bed hungry, most nights. Lilian’s harvest this year barely yielded anything, and even her goats, the hardiest of creatures, were struggling to survive. She used to have 20 animals but only has less than half that number now.
For me, this starvation is a political failure. The world produces enough food for our global population but it lacks the political courage to ensure that it is distributed fairly. While Ukraine has understandably taken up much media attention recently, the fact that so few people in Ireland are aware of the crisis in the Horn of Africa is deeply concerning. The international community was able to raise $16 billion for Ukraine in one month while the UN has so far collected just $93 million for the hunger crisis in East Africa.
Africa has the potential to produce far more food than it does currently if more long term investment was made in infrastructure, land expansion, technology and climate-smart agriculture. Agriculture can be a solution to hunger in Africa. It’s responsible for up to 42% of total GDP in sub-Saharan Africa and is 2.5 times more effective than other sectors at lowering rates of poverty.
The threat posed to Africa’s food supplies by the conflict further underlines the vital importance of improving African grain production. According to a recent McKinsey report, investment in food production systems would result in a two or threefold increase in the volume of cereals and grains produced on the African continent. Tapping Africa’s agricultural potential would add 20% more cereals and grains to the current worldwide 2.6 billion tons of output. Similar increases could be seen in the production of horticulture crops and livestock.
A few years ago, Self Help Africa involved itself directly in a humanitarian emergency for the first time, in response to the unfolding food crisis in East Africa. For me, it was a logical and natural move. We distributed climate-resistant seed and other support to the farming communities affected by the crisis, and since then have also handed out food as well as addressing the needs of many families affected by the Coronavirus pandemic and natural disasters like the recent tropical storm Ana.
The passage in James 2:15-16, "Suppose a brother or a sister is without clothes and daily food. If one of you says to them, 'Go in peace; keep warm and well fed', but does nothing about their physical needs, what good is it?" reminds us that faith must be accompanied with action. It is not simply enough to send good wishes with the hopes that words will suffice to alleviate someone's condition. While being empathetic is necessary, it must also be translated into good deeds and real action.The capacity to help people and children in need is a measure of our humanity. War, hunger, famine and poverty are not abstract; they have a human face. I’m confident that with the help and support of Irish Aid and the generosity of the Irish public and our partners on the ground, we can make a huge difference for good in the lives of some of the poorest people, families and children on our planet.

Self Help Africa are working with local partners in East Africa particularly in Ethiopia and Kenya to provide emergency supplies and vouchers to help families buy the essentials for survival. Longer-term, we’re also ensuring farmers have access to drought-tolerant seed for the next planting season. Our priority right now is to respond to those families and communities at most risk – but they need your help. Together, we can protect farming families from the worst effects of the drought, and access essential food for their family. Please, if you can afford to, make a donation to help us continue this work with people in extreme need. Why not organize with your family, friends or businesses a fundraising event or to make a donation, to support our East Africa Appeal and our work in many countries in Africa and some other countries in our world and find out more about the work of Self Help Africa to “Act locally but impact globally” and you can make a donation at www.selfhelpafrica.org/ie/east-africa-appeal/  You can make a credit or Laser card donation by phoning ((01 ) 6778880  or simply send whatever you can afford to Self Help Africa, Westside Resource Centre, Seamus Quirke Road, Westside, Galway or to Self Help Africa, Kingsbridge House, 17-22 Parkgate Street, Dublin 8.  If you are interested in finding out more about Self Help Africa’s Lifetime Gifts, or want to find out any other ways you can help us or partner with us in our work, just visit www.selfhelpafrica.org or drop me a note at ronan.scully@selfhelpafrica.org. I’d be happy to chat!