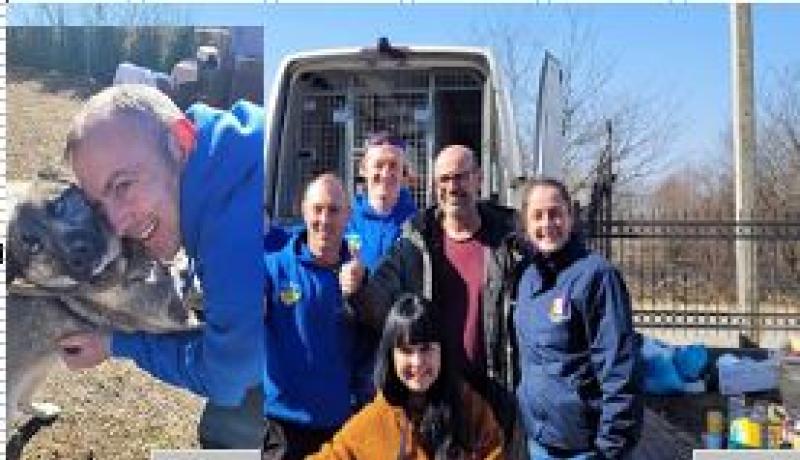 A Ferbane man has just returned from Ukraine where he helped to rescue 53 dogs, bringing them across the border to safety in Poland.

Darren Bracken, who volunteers with the Laois based ‘Husky Rescue Ireland’ regularly transports rescued dogs from Ireland to good homes in Sweden.

He had been watching what was happening in Ukraine and thought Husky Rescue should travel there to take care of the pets who had been abandoned in the war through no fault of their owners.

''Myself and Andy Cullen, the founder of Husky Rescue Ireland were talking about it and we agreed to go. We put up the appeal online and we were overwhelmed. We got 10 to 15 tons of supplies. We got food for dogs, cats, hamsters and rabbits plus people donated food for the people of Ukraine as well, along with toiletries and other things,’’ added Darren.

‘’We were overloaded with stuff and a little bit overweight, but we got through customs and we drove from Dublin to France. to Germany and Poland. We crossed the border three times to rescue the dogs.’’

Darren and Andy were only allowed to bring 10 dogs at a time which they found frustrating as the van can hold a number of large dogs, but they were the rules so it required them to make the hazardous journey three times.

‘’We passed through an army barracks the same night as it was blown up. We didn't know until we came out,’’ said Darren.

The dogs were being cared for in a small family run rescue centre in Ukraine. Many of the buses crossing the border with refugees don’t allow dogs on board so people left their dogs with the rescue centre.

Darren and Andy off loaded their supplies at this particular centre which meant that people who were dropping off their pets were able to pick up vital supplies.

''We know the stuff got to the people and to some of the soldiers as well. The people who were picking it up knew the area. They knew which roads to travel to avoid being bombed.''

Darren and Andy were able to reunite three of the dogs with their owners. The owners of the other dogs will know their pets are in a safe place and being well looked after, until the day they can be reunited.

''One dog gave birth to 7 pups just days after she was brought across the border. She waited until she was in a warm and safe place.'' said Darren.

Darren said he and Andy couldn’t have made the journey without the support of the team at Husky Rescue Ireland. They looked after the centre while they were abroad, feeding and walking the dogs in their care. He also gave a big thanks to Star Rescue for all their help.

To make a donation to Husky Rescue Ireland log onto https://www.huskyrescueireland.ie/donation-options