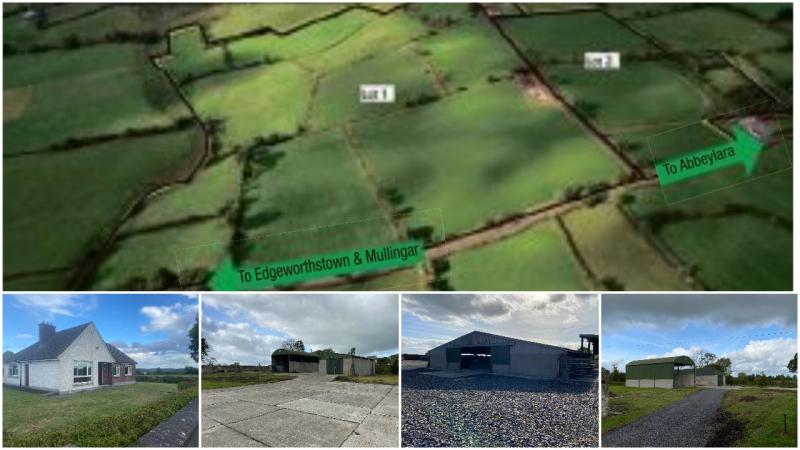 A farm in the Midlands ‘exceeded all expectations’ as it sold for a staggering sum following intense bidding at a public auction held online (LSL Auctions) and in the Mullingar Park Hotel.

Granard based auctioneers JJ Flood & Sons sold the top quality 81 acre residential farm at Robinstown, Granard, Longford for €1.38m on the instructions of the executor of the late Seamus Carrigy, who was a founding shareholder in Granard Farmers’ Mart.

Paul Flood, of JJ Flood & Sons, said the property, comprising an excellent farm with a 1960’s bungalow was initially offered in various lots, however, it was eventually put on the market in its entirety.

Home to the same family for over 150 years, Carrigy’s of Robinstown is well-known locally as an outstanding farm. While in recent years the farm has been used for cattle fattening the holding had a great reputation for cattle breeding and horses.

The farm’s “Bull Book” lists covers of the farm’s bulls over generations. The 14 acre ‘Sporting Field’ bordering the Abbeylara to Killasonna road played host to a range of sporting events including GAA and Point-to-Point racing. Abbeylara GAA club is now located on neighbouring lands.

There was much local interest in the sale and the auction room was buzzing with anticipation. There was also considerable on-line interest.

Mr Flood explained, “Bidding was lively for all lots but it was clear after the first two rounds that the property would be sold in its entirety.”

After going on the market, two bidders, one in the room and one on-line competed, with the on-line bidder winning out.

The farm was bought in trust, with much speculation as to who might be the purchaser.

Mr Flood said, “A residential farm of this scale and quality is a rarity so the interest was no surprise. It is, without question, one of the finest farms of fattening land in the Midlands.”

With a total of 16 registered to bid on-line alone, Mr Flood stated that JJ Flood & Sons still had many clients looking for parcels of land at the moment.