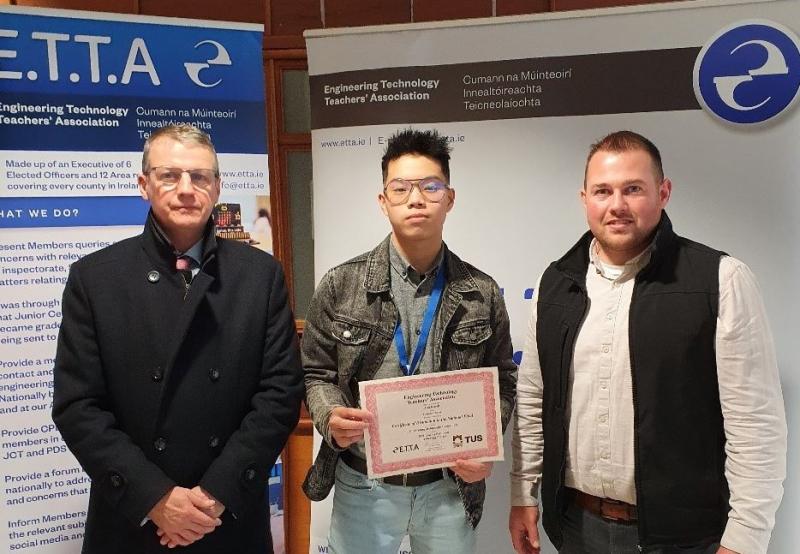 A TULLAMORE student has won an award for his Leaving Certificate Technology project.

Alan Farrell, who completed the Leaving this year, achieved a Distinction in his project in the subject, which he studied at higher level.

The Colaiste Choilm past pupil was presented with the award at a ceremony in the Technological University of the Shannon last Saturday.

Alan is currently studying Marketing, Innovation and Technology in DCU.

Technology was introduced in Colaiste Choilm as a senior cycle option for the first time for the Leaving Certificate class of 2015 and 16 students took up the subject.

Those students operated from the woodwork room in the school at the time and the subject became popular immediately with 48 students signing up for Fifth Year Technology that year, filling two full classes.

The school identified a need for a separate Technology room and the then principal Colin Roddy and the board of management gave the go-ahead for the conversion of a project store and locker room into a practical classroom for Technology.

Mr O'Sullivan said that since the introduction of the subject at senior cycle, over 250 Leaving Certificate students have completed projects, portfolios and examinations at a high standard despite limited space in the classroom for storage and machinery, or the option to complete the Junior Cycle Technology course because of this lack of space.

The board of management and the Parents’ Council, through Mr O’Sullivan, ran fundraisers like table quizzes to aid the purchasing of 3D printers and laser cutters to help the students with the realisation stage of their project.

As well as this, significant funding for other equipment was received from the Department of Education and Skills. A second Technology classroom was added this summer, prompted by the introduction of Junior Cycle Applied Technology as an option the previous year.

A robotics club, Vex, was set up this year to develop students’ skills in design, building, programming, critical thinking, research and creativity through the platform of the VEX V5 robot competition.

Offaly County Council sponsored two VEX V5 robot kits and game elements for the students to compete with. Over 30 senior and junior students take part, developing their skills all areas of STEAM (science, technology, engineering, the arts, and maths).

“The future is looking bright for the subject in the school with approval of a fully specified Technology room as part of a new extension to the school hoping to be completed in September 2025 which will cater for future students who attend the school,” said Mr O'Sullivan.