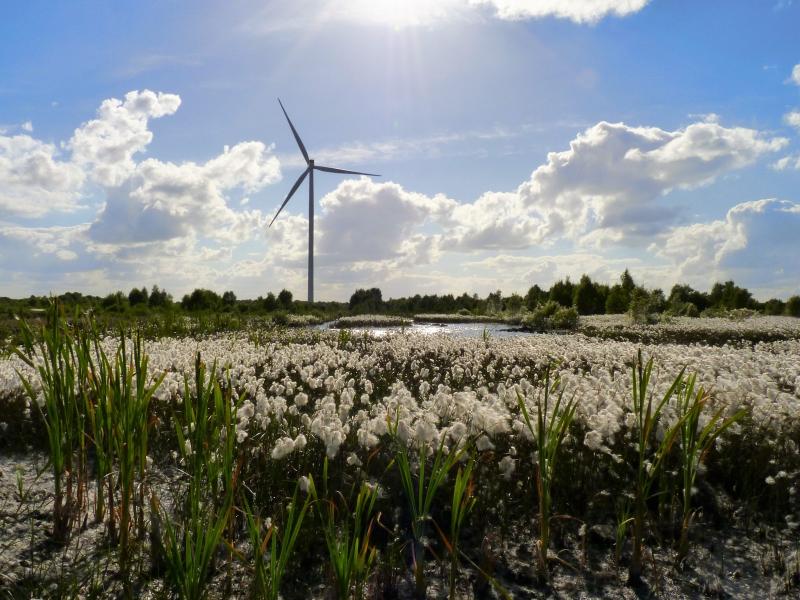 BORD na Mona has confirmed it is hoping to build a wind farm on a bog close to Cloneygowan.

The company has begun consulting the public about its latest wind turbine project but says it has not yet decided how many of the structures will be located at Garryhinch Bog.

The study area for the proposed wind farm stretches across Offaly and Laois and is about 2km from Cloneygowan village and St Brigid's Community Centre, Cloneyhurke.

In an advertisement published by the energy company in the Tullamore and Midland Tribune this week, the energy company says: “As the project is at a very early stage the proposed turbine locations and height have not yet been determined.”

Bord na Mona says that over the coming months, to determine the extent of the proposed development, it will undertake on-site ecology, ornithology, aquatic and heritage surveys on Garryhinch Bog, along with site investigation works.

The Garryhinch Wind Farm website also says: “Additionally the company will also commence a series of off-site surveys, such as noise monitoring at sensitive receptors around the site and topographical surveys of the proposed grid connection and proposed haul routes.”

As part of the consultation process with the public, three “Community Engagement Sessions” are being lined up over three evenings in January.

All three sessions will be held subject to Covid-19 restrictions and are scheduled for 5-9pm.

Bord na Mona says “any queries or concerns” people may have can be discussed with the company.

In the meantime, an online survey can be completed on the project websitewww.garryhinchwinfarm.ie or a form can be downloaded and completed and sent by post or email before February 28 next.

“All feedback in relation to the proposed development will be reviewed and considered by the project team. As part of our commitment to community engagement and to ensure you are kept up to date on developments of this project you can also join our project mailing list via the project website,” said Bord na Mona.

Cllr Eddie Fitzpatrick, who lives beside the bog, says the reaction from the public so far has been quite muted but believes people may be waiting until they have more information.

“The wind monitoring mast has been up there for three years or more so we've known something was going to happen down the line,” said the Fianna Fail councillor.

“They have the three consultation meetings and two of them are going to be in Cloneygowan and Cloneyhurke so they're covering the areas.

“I haven't heard anything as yet from any local people about it. Nobody has said they're against this.”

While the map of the study area indicates that turbines could be located quite close to Cloneygowan village, Cllr Fitzpatrick says the map illustrates land owned by Bord na Mona, rather than its cutaway bog alone.

“In some of the area there are turf banks still in existence and still worked by individuals there.”

Visual impact will be a concern locally, Cllr Fitzpatrick adds. “From our farm on a nice day you can see the Slieve Bloom mountains and if this happens you will probably see some of these turbines but we don't know yet.”

He also noted that a proposal for a wind farm at Ummeras on the Laois/Kildare boundary was turned down because it was on an Air Corps flight path.

“So if people have a genuine reason they can make a submission. Of course [Garryhinch Wind Farm] will be going straight to An Bord Pleanala,” said the councillor.

“At the moment maybe people are just digesting this and waiting for the public consultation to see what happens.”

The company says that since 2016 over 230,000 visits have been made to the Mountlucas amenity facilities.

The Garryhinch project is part of Bord na Mona's ongoing transformation to what it calls a 'climate solutions' company after it ceases peat harvesting and began a programme of bog restoration.

Mountlucas, which can generate up to 84 MW of electricity, is currently its only operational wind farm in Offaly but construction of a 21-turbine facility at Cloncreen in the east of the county is well underway and planning permission has been granted for another 21 turbines at Derrinlough in west Offaly.

Bord na Mona also has proposals for a 17-turbine wind farm on its bog at Lemanaghan and that proposal has run into significant opposition because of its proximity to the early Christian monastic site associated with St Manchan.

The company also generates electricity from biogas and aims to become a significant player in the solar energy market.

In relation to the Garryhinch project, Bord na Mona can be contacted by post at Garryhinch Wind Farm, Bord na Móna, Main Street, Newbridge, Co. Kildare, W12 XR59 or by email to garryhinchwindfarm@bnm.ie