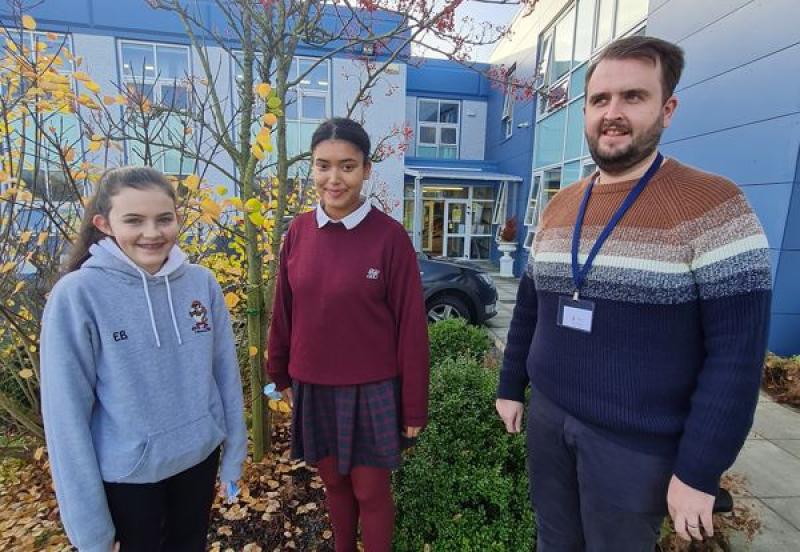 SHS music students, Aaliyah Lovett, and Eva Bergin, were stunned to find out on November 24th that they had been chosen as the two Offaly representatives for the Aldi Christmas Choir. Over 1000 students from Ireland entered this competition with the hope of being selected for this prestigious events and Eva and Aaliyah were selected from 40 entrants in Offaly alone.

Both girls will now begin rehearsals online until December 2nd and will be ably assisted by their Music teacher, Mr Shane Farrell. The girls will then join another 28 finalists for the final compilation and performance. Their final performance will be circulated on You Tube and other social media platforms in both Ireland and Europe.

However, superstar status is nothing new to these two girls. Both Eva and Aliyah performed in the school’s recent Musical All Together now and their stunning performances of Let It Go and Tomorrow respectively, won the hearts of all who were there on the night. Eva also had a starring role in the 2019 Little Shop of Horrors, another SHS Musical production and Aaliyah has performed as soloist on several occasions both locally and nationally for the SHS Choir.

Aaliyah has also added another star to her name by being chosen as on e of the 150 successful candidates for the new Irish girl band, to be managed by Louis Walsh.

Aaliyah explained that there were over 15,000 applicants for the role and only 150 were selected.

“I will have to travel to Vickers Street to record my piece and I’m very lucky to have Mr Farrell to help me select and perform my piece. I am really excited about this opportunity because music is my life,” said Aaliyah. “I have a particular interest in composing and playing piano is probably one of my most valuable pastimes.”

Aaliyah spends much of her free time working with the National Concert Hall where she is a participant in a Creative Lab. It is for young composers who demonstrate great talent at composing and song-writing. She has been involved since the start of 2021 and hopes to continue for a long time yet.