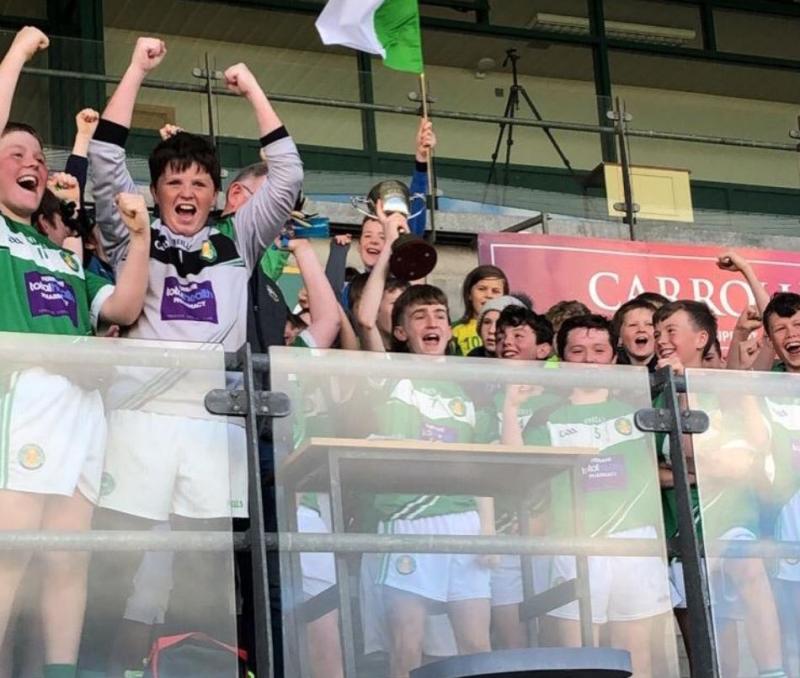 Ferbane/Belmont were crowned U13 ‘A’ Football Champions on Saturday afternoon after a 4-16 to 2-10 win over St Vincent’s in Bord Na Mona O’Connor Park.

Despite what the scoreline may suggest, this was by no means a hammering and the sides could not be separated in normal time. Two Nathan Kelly goals in the first half of extra time were the main difference as Ferbane/Belmont held on to claim the silverware.

Played under a beautiful October sun, it was an evenly contested first half with both sides giving everything and it led to an enjoyable opening half of football which was extremely close.

Ferbane/ Belmont raced out of the blocks and they were on the scoreboard almost straight away when Eamon Maher fired over after a well worked move.

St Vincent’s responded well and were level just one minute later when Dara Flanagan pointed and they took the lead straight after, thanks to a brilliant Darragh Sullivan point.

It was end to end stuff with both sides counteracting their opponents scores. Ferbane regained their lead before St Vincents levelled and there was very little between the sides.

Ferbane/Belmont got a break 12 minutes in when Dara Waldron was quickest to react to a loose ball and his shot flew into the net.

It looked as if Ferbane/Belmont would take a significant lead into the first water break, but Paddy Burns kept them in it. He pointed from a free and just before the stoppage, he grabbed a goal from himself. He did brilliantly along the end line and his shot was bundled into the net by a group of players on the line, and despite their best efforts, Ferbane/Belmont could not keep it out. Burns’ goal left Vincent’s trailing by the minimum at the water break.

Ferbane pushed on in the second quarter and their direct running did cause Vincent’s some problems. Sean O’Shea and Ruairi Woods both raised white flags, but St Vincent’s kept in touch through Darragh Sullivan and Shane Lawless.

An Eamonn Maher free for Ferbane/Belmont before half time left two points in it at the break.

It was much the same as the first half upon the resumption of play, with neither side able to pull away. Ferbane/Belmont increased their lead to four with a ‘45’ from Ruairi Woods and another Eamonn Maher free.

However, St Vincents plugged their way back and midway through the third quarter, they raised the green flag for a second time. Darragh Sullivan mishit a shot and it flew over Callum McCormack’s head in the goal to level the game at the second water break.

Ferbane/Belmont had a glorious opportunity of a goal just after the second water break when Nathan Kelly found himself one on one, but his shot blazed just wide of the target.

Eamon Maher and Shane Lawless traded frees as it became clear that this game was going right down to the wire.

Shane Lawless fired Vincent’s ahead with five left on the clock but to their credit, Ferbane/Belmont fought back, and they equalised again through Ruairi Woods and his point was the last in normal time as the sides couldn’t be separated with two 10 minute halves of extra time on the horizon.

Ferbane/Belmont almost had a goal inside the first minute of extra time, but they were denied by an excellent Ciaran Owens save at point blank range. Seconds later, he was called into action again with another fine save and the rebound fell to Nathan Kelly, but his shot cannoned back off the crossbar with Ruairi Woods pointing the resulting ‘45’.

Ferbane/Belmont were eventually rewarded for their efforts seven minutes in when they shot two goals inside a minute. Nathan Kelly was on the end of a brilliant Woods run to palm the ball into an empty net while seconds later, Kelly was again through, showing real composure to slot the ball past Owens in the Vincent’s goal, which opened up a six-point lead in favour of the boys in green at half time of extra time.

Ferbane/Belmont stretched that lead out to seven early in the second half of extra time courtesy of an Eamon Maher free and a point from substitute Sean Grennan.

Grennan then put the icing on the cake at the death when he reacted quickest to a loose ball to coolly slot past Owens for Ferbane/Belmont’s fourth of the day, ensuring the silverware and rounding off an impressive performance.