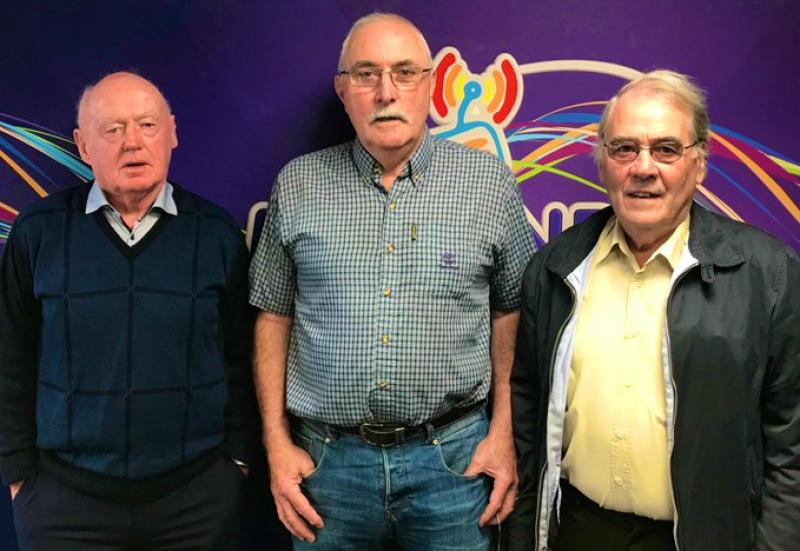 Tony McTague, Sean Lowry and Eugene Mulligan were interviewed on Midlands 103 at the weekend PIC: Will O'Callaghan/Twitter

THE heroes of Offaly’s breakthrough All-Ireland success of 1971 are rallying around the Paddy Fenning Walk as the event approaches later this month.

The walk takes place in Tullamore at 11am on Sunday, September 26 - the 50th anniversary of Offaly’s first senior All-Ireland victory - and will be in aid of motor neurone disease research and support services, as well as homeless causes in Offaly.

Tullamore man Paddy Fenning was introduced as a substitute in Offaly’s All-Ireland final win over Galway in 1971 and was a regular on the starting team as they retained the title the following year, scoring the game-breaking goal against Kerry in the All-Ireland final replay. He was diagnosed with motor neurone disease in 2019 and succumbed to the illness in May of last year, but not before he had set wheels in motion for the fundraiser with the aim of raising €150,000.

On Sunday last, three of his former teammates, Tony McTague, Eugene Mulligan and Sean Lowry, spoke with Will O’Callaghan on Midlands 103’s Inside Line show, reminiscing on the success of 50 years ago while looking forward to the upcoming event.

After the conclusion of the walk on September 26, Offaly county board will hold a drinks reception and meal for the 1971 team.

“A lot of the time we meet, it’s not on joyful occasions but this one, I know we’ve lost Paddy, but it’s in his memory and I’m looking forward to the gathering,” said Eugene.

“Paddy was a tremendous organiser right down through the years. He was always the one that made phone calls to different characters to tell us about such and such a person or whatever, not to mention all the different events that he organised for us over the last 25 years.”

Continuing on that theme, Sean Lowry commented: “Paddy would have been a serious, serious organiser, all the time. Paddy would ring up when someone would die or something and he’d say, ‘We’ll have to get out the blazers’.

“Paddy organised the blazers back in ‘96 when it was 25 years after we won the All-Ireland in ‘71 and Paddy got the blazers and the trousers and the shirts and the whole shebang, the ties.

“It was ironic and very, very sad that when Paddy passed away we had the blazers on and we couldn’t parade beside him and go to his resting place with him.

“I thought it was sad that day because he was the one who organised all the trips abroad, he organised everything to do with everything really. Just sad, but a great guy though.”

The surviving members of the 1971 team will be out in force for the walk on September 26 and Sean added: “There was never a chance, when he did decide to do it, that we weren’t going to carry on and bring it to its conclusion and hopefully we can get the €150,000 that Paddy always craved and I think we will.”

For further information or to make a donation, visit www.paddyfenningwalk.com.

Lost racing pigeon had epic journey before landing in Offaly

PROPERTY IN FOCUS: Incredible home in Tullamore is on the market for an eye opening price - Take a tour around