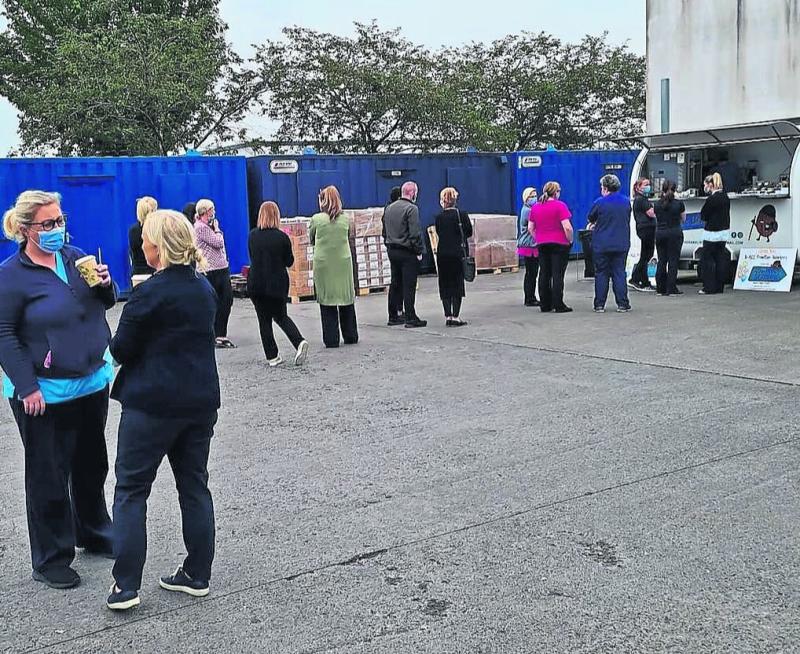 STAFF at Tullamore Hospital had a day-long treat when the Rambling Bean coffee truck opened up and provided all comers with free beverages.

Rambling Bean founder Michael Lynch is under the care of the Midland Regional Hospital himself and also has a sister working there so he is well aware of the continuing contribution the healthcare workers are making to getting everyone through the Covid-19 crisis.

“I've a sister up there working in one of the wards, Rachel Mullarney and I'm a patient there myself so this was a nice way to show appreciation and say thank you,” explained Michael.

His ongoing condition is being managed by consultant gastroenterologist Dr Geraldine McCormack and he returns for scheduled check-ups.

“With me being in and out three a few times a year, we all know the work they're doing and we said it would be nice just to give something back.”

The staff's reward was free tea, coffee and hot chocolate, all prepared and served by Michael himself from the coffee truck he got up and running about three months ago.

Zoe Coady, who works in the hospital lab, commended Mr Lynch on his initiative.

“Some people were wondering was he being paid by the HSE but he was actually there just to say thanks to the staff,” she said. “It was really, really nice of him. He was there all day on his own, there was nobody else helping him.

“Everyone was talking about him and singing his praises. The coffees were great.”

Michael has his mobile coffee trailer (083 0899770) on the road at weekends and has been serving customers at various locations around his local areas of Daingean, Croghan and beyond.

Dates announced for Confirmation and Holy Communion in Tullamore Parish