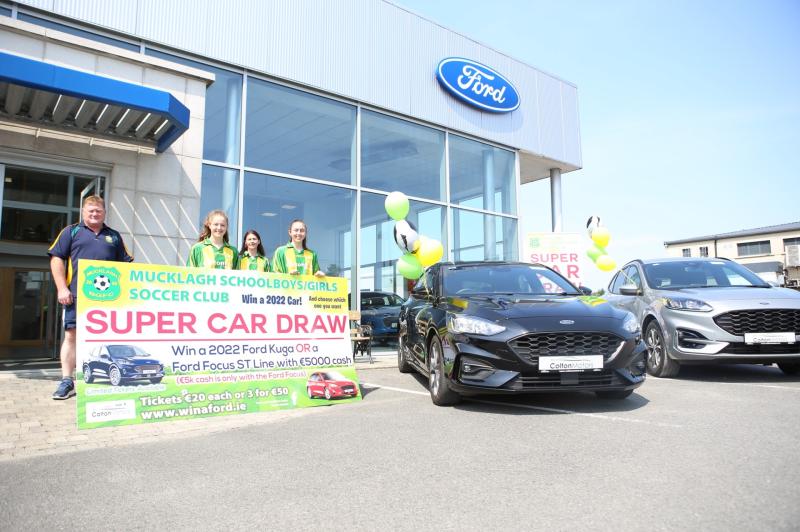 Mucklagh Schoolboys/Girls Soccer Club have launched their biggest fundraising venture to date by offering you the chance to win a car from Colton Motors, Tullamore.

Funds raised from the draw will go towards improving the facilities at the club.

The club's www.winaford.ie online car raffle will see the winner given a choice between two vehicles, a brand new 2022 Ford Kuga or a 2022 Ford Focus ST Line. There is also a €5,000 cash prize with the Ford Focus option. Tickets are priced at €20 or 3
tickets for €50 and can be purchased on the launch day (Friday, July 23) in Colton’s or on the website HERE.

The monster car draw is being launched on Friday, July 23 on Midland 103's Afternoon Show with Carl James from a live roadshow in Colton’s Motors, Tullamore. There will be prizes on the day and the two cars will be on show to view.

There will also be guest appearances from past members of the club who now play for the under 19s Women's National Team and Women's National League Squads. There is a limited amount of tickets available for purchase. The draw will take place in December 2021.

Mucklagh Schoolboys/Girls Soccer Club was established in 2005, and for the majority of time since that, the Late Rev. David Hutton Bury and his family have graciously provided us with grounds to play on the beautiful Charleville Estate. This club will be forever indebted to the Hutton Bury family for the continued support they have shown towards the club, & the promotion of youth sports in the area.

Over the years, many amazing memories have been made. Trips to soccer tournaments in Scotland and Wales, All Ireland Community Games titles won, League & Cup titles were battled for, Club of the year awards won. For 15 years,
club committees have continuously aimed to purchase land for the club, on which to grow and develop.

While waiting for that opportunity to arise, work continued within the club to implement proper structures for coaching and management, and in 2019, we saw that work rewarded with the achievement of the coveted FAI Club Mark Award.

The achievement of the Club Mark Award as the first club in County Offaly and the Midlands Schoolboys/ Girls League, is an enormous source of pride for our club. It clearly demonstrates our commitment to the structured operation of all aspects of the club, with FAI qualified coaches, who are all Garda vetted and have completed mandatory Child Welfare training.

We remain very proud of this achievement, and work tirelessly to maintain the highest standards we have already achieved, alongside our club ethos of inclusion and fair play for all. We are striving toward the FAI One Star Award in the near future.

Today, the club facilitates soccer for all ages from U7 to U16 MSL teams, both boys and girls, along with U17 and U19 CCFL teams.

We run a ’Football for All’ program to deliver football opportunities to people who may not ordinarily get a chance to play the game and to cater for people with a disability who want to play football. More recently, the addition of both our Walking Soccer Program and the U6-U9 age group Summer Soccer Academy, have proven to be a huge success.

In February 2020,the club were finally able to purchase 11.5 acres of land in Screggan, a permanent home for the club to flourish further.

Plans have been drawn up for this new venture to begin with Phase 1 development which will include playing pitches and toilet facilities. We are aiming to raise much-needed funds to aid with this first phase of progress. The constraints of COVID-19 restrictions have severely hampered all our annual fundraisers, but despite the global pandemic, the fundraising subcommittee have continued to work and make plans behind the scenes (and zoom screens), to make this dream come true. While the day to day realities of running the club have continued, we are now also launching the clubs biggest fundraising venture - www.winaford.ie.

TAP HERE TO BUY A TICKET