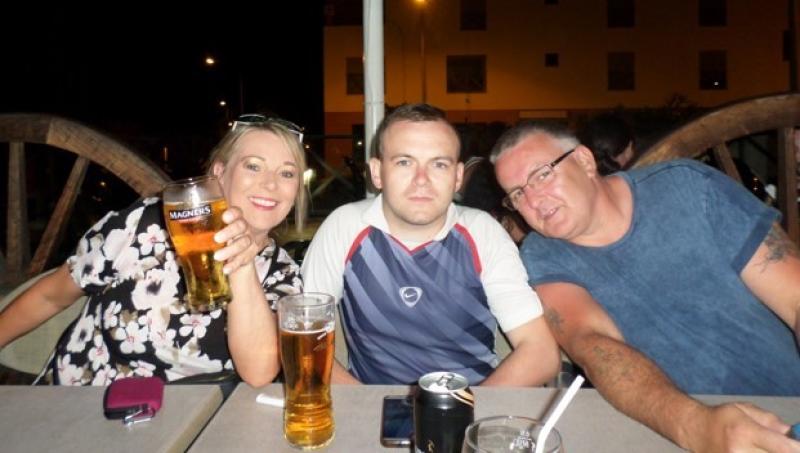 The parents of a young Midlands man who tragically took his own life have issued a plea to people to support an online fundraising event organised to help a mental health charity set up in the county.

Keith McCarthy from Stradbally in Laois sadly ended his life in 2018 at the age of 25. It led to absolute devastation for his parents Kevin and Sandra and sister, Shauna.

His broken hearted parents have spoken out in the hope that their message may cause another person contemplating suicide to stop and get immediate help and they are urging people to rally behind the SOSAD Laois charity initiative which is raising funds for a centre in Portlaoise.

Dad Kevin says their family has been hugely traumatised by the tragic death of Keith and they are all suffering in their own way.

"I wouldn’t wish the pain on my worst enemy, I really wouldn’t; it’s that bad”.

“Suicide is unlike other deaths, other bereavements;  there’s so many unanswered questions, guilt, emptiness and this awful feeling of helplessness. It’s a lasting sadness for me knowing we didn’t fully know the pain Keith must have been in. He was a happy go lucky guy..on the outside anyway. He just wanted to be everyone’s friend.

"Himself and Sandra were absolutely devoted to each other; they were best friends. It’s been dreadful for Shauna, she is now an only child, she lost her one and only sibling, it’s heartbreaking. She’s been a fantastic help to us, she’s the only thing that keeps us going now,” he said.

Trying to get on with his day-to-day life has proven, and is proving to be very difficult for Kevin.

“You get little bits of reprieve. The first few seconds when you wake in the morning but then it all comes crashing back - it never ever goes away. The grief is a lasting shadow and instead of Keith walking along me, the grief walks with me. I had counselling, I knew I needed help.

“I had major panic attacks. I couldn’t use the stairs in work as there is a big drop and I couldn’t be sure I wouldn’t jump. The first Christmas was bad, I expected it to be but I never thought that New Year’s Eve would be as hellish as it was. I was on night duty in the hotel I work and I was just knocked sideways by the grief and the pain. I went up on the roof and I was just bereft.

"I wanted to jump, I kept looking at the sky and out of the corner of my eye I saw a Chinese lantern and kept watching it as it went up into the sky. It saved my life. I couldn’t do it to Sandra and Shauna, I couldn’t put them through the devastation again. Knowing the agony we’ve experienced, I just couldn’t do it.

"I’ve learned though that it’s ok to think of it once you don’t act on it, we’re all human and humans can only take so much. The only reason I’m alive is my daughter Shauna,” he said.

“I have great faith and that does help, it soothes and helps me a lot. I feel I will see Keith again. It’s the little things that trip you up, the unexpected things - a song, a smell, a joke. What I’d give to see Keith’s beautiful smile again. I don’t want other people going through with what we’re going through, every minute of every day,” he says.

“The service is desperately needed in Laois and the timing is crucial cause people are really suffering now as a result of Covid and all it brings with it. Our experience has shown me how fragile the human mind is. It can only take so much.

"The people who need help need it immediately. There can’t be any waiting around, they are in a fragile state, they may be highly agitated, or they may be calm. Either way they need somebody to listen and help. It literally terrifies me when I hear of waiting lists for mental health services. SOSAD Laois will be a most welcome service in the county,” he says.

If he could say one thing to people in despair who feel that suicide is their only option, Kevin has this to say

“I’d like to be able to talk them down, but every case is different as every human being is different. I’d like to have a chance to let them know that somebody does care, there is a better way for them and that what they’re feeling is not permanent but suicide is,” he says.

Speaking from her home in Castlemitchell, Stradbally, Sandra says everything has changed.

“We’re not the happy people we used to be, It’s a daily battle, I haven’t accepted it at all. Looking back I see that Keith was very like me, he hid a lot rather than burden other people. We think we know people but you never can say 100% how a person really is behind the fake smile. I’ve been putting on quite a lot of fake smiles since Keith took his life.

“I’m trying to be strong for everyone but it’s hard. I lost both my parents in one year. They were both only 64 and it was desperate, so traumatic as my Dad was knocked down, there was no warning and the pain was very bad but it fades into comparison with Keith’s death. Nothing can describe the agony. No parent should have to bury their child, it’s unnatural,” she says.

A song written by a friend of the McCarthy family bereaved by suicide will be played as part of this Sunday’s online extravaganza to raise funds for SOSAD Laois.

‘In the Light Of Heaven’ was written by Laois songwriter Jimmy Hewitt.

“ I felt it was the only thing I could do to try and help ease their pain,” says Jimmy.

Sandra thanked the songwriter for his help

“We’re so grateful to our very good friend Jimmy Hewitt for taking the time and the care for writing ‘In The Light Of Heaven”.

“The song is all the more poignant for the fact that Kevin and Shauna sing together. It is a perpetual  legacy for Keith,” she said.

Sandra concluded: “We’re left with the heartbreak; there’s no mending us”.

In order to finance the new SOSAD Laois centre, the newly established SOSAD Laois Branch has organised a Virtual Variety Night ( Online Show) featuring acts from all over the county, this show will be broadcast to the people of Laois & beyond on Sunday 6th of June at 8 pm.

Those participating in the event are all local people who have volunteered to participate, they play a very important role and are the “Stars of the Show”. The stellar line up includes Laois Comhaltas, Music Generation Laois ( accompanying  the Lynam School of Irish Dancing), Portlaoise GAA, Portlaoise Musical Society, Portlaoise Pantomime Group, Portlaoise Panthers, One of a Kind,  popular Priest, Fr Paddy Byrne , Laois School of Music and Heywood Community School. Popular Country Singer Michael English is also lined up and is sure to be a big draw.

Well known people including Clare Byrne, Brent Pope and David Norris have kindly come on board to judge the event.

SOSAD (Save our sons and daughters) is shortly opening an office in Portlaoise to serve the people of Laois.

Check out the Laois SOSAD Facebook page for regular updates.

To watch the online Varity Show on the 6th June at 8pm go to www.sosadlive