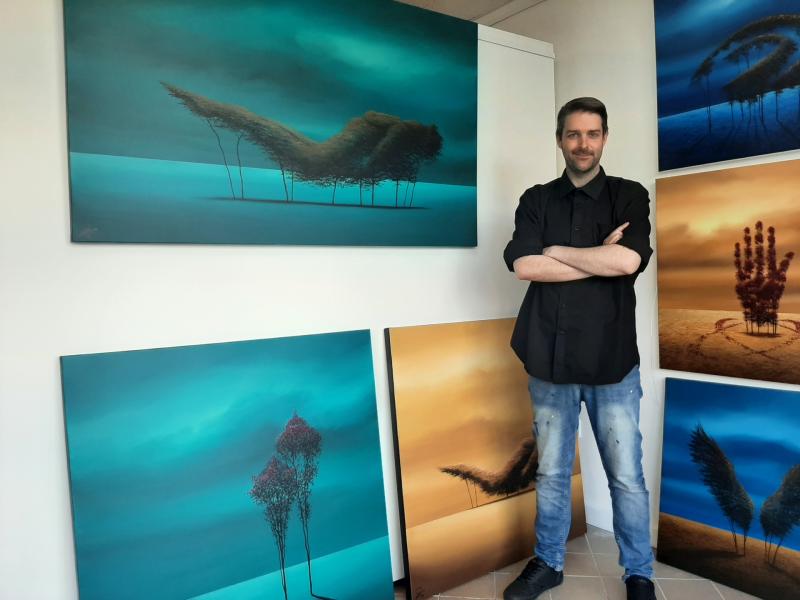 Artist Vincent Devine pictured in his Tullamore gallery which opens on Friday, May 28

VINCENT Devine, the Offaly painter responsible for the acclaimed painting of Vicky Phelan, opens his new gallery to the public in Tullamore tomorrow (Friday, May 28).

The Clara native has spent the last few months converting a building on Church Road, close to the Lidl store.

Because it has movable internal walls, the unit will serve the dual purpose of workspace and exhibition area.

“The beauty of the space is that because the walls are on wheels I can have a massive studio space and a tiny gallery or I can have a big gallery and a small studio space to work in,” Devine told the Tullamore Tribune.

On Fridays, Saturdays and Sundays the gallery will be open to the public and people will be able to view Devine's work, purchase paintings or prints, or talk to him about private commissions.

“You can walk in like a normal gallery and walk around and have a look,” he explained. “If people want an appointment they can make one between Monday and Thursday because they're the days I work in the studio at the back”.

The 34-year-old father of three has several projects currently ongoing but the public will first see his Ambigutree series, works which are inspired by trees and in which he takes his own unique slant on how they can be seen.

He has one example where the viewer is looking up into the leafy canopy and can visualise a shamrock shape in the centre.

“I'm going to do a series where I'm putting different shapes in the middle and people will see different things,” he said.

If someone has something that is personally significant to them, they can speak to him about it and he will integrate it into one of the trees for commission.

Because of the variety of shapes trees form as the leaves grow, he is considering depictions of Irish counties or any number of the world's nations.

Devine sprang to national prominence when his large triptych (three paintings in one) of health advocate and cancer treatment campaigner Vicky Phelan was featured on The Late Late Show and sold for charity through Sheppard's auction house.

A visual communications graduate, Devine's work has been exhibited in the UK, Hong Kong, Miami and Toronto.

It has been lauded by stars such as Shakira, Will.I.Am, Alanis Morissette and JK Rowling.

Vincent was chosen for the Vicky Phelan painting because one of his clients is Mary Leahy, the founder and chief executive of Heroes Aid.

The triptych was bought by Co Kilkenny businessman, David Brennan, and now hangs in his home in Mooncoin.

Devine aims to borrow the painting and bring it to his gallery in Tullamore where it will go on display as part of a national tour raising awareness of cervical cancer.

Vicky Phelan has travelled to the US for further cancer treatment.

Prices for original paintings will begin at about €250 but prints will also be available. Contact info@vincentdevine.com