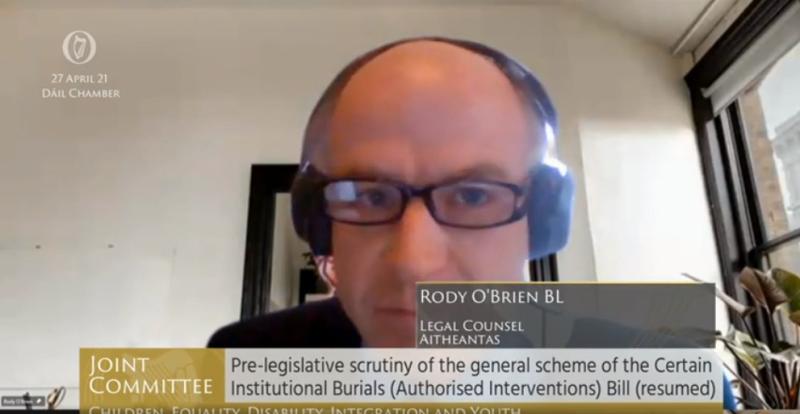 A Tullamore based organisation has led the call at an Oireachtas Committee hearing for all burial grounds at Mother and Baby Homes to be taken over by the State.

Aitheantas, an adoptee rights organisation, were giving evidence at the hearing of the Joint Oireachtas Committee on Children, Disability, Equality and Integration.

The Committee was told at a discussion on the Certain Institutional Burials (Authorised Interventions) Bill on Tuesday, April 27 that “the state should take ownership of all burial grounds, both those identified and those yet to be identified, by means of compulsory purchase order,” said Maree Ryan-O’Brien of Aitheantas.

The organisation also wanted a role to be played by a coroner in investigating and establishing the cause of death of the babies and for burial grounds to be preserved and protected.

Giving evidence, Rody O’Brien BL, legal counsel for Aitheantas stated that the Bill as set out was a perfect example of what is in the interest of the common good and that Under international law and the European Convention on Human Rights we are obliged to investigate these mass deaths and mass burials and that there was further scope to include coroner aspect to the Bill to deliver much-needed answers to survivors and their families observing that “we owe it to survivors and all the people who have been buried on these sites to ascertain the truth and investigate”.

There was further evidence given by both Mr. O’Brien and Ms. Ryan-O’Brien on expansion of the agency created under the bill to include a coronial role, the scope of the powers of the agency and the need to expedite exhumations in Tuam.

Both Mr. O’Brien and Ms. Ryan-O’Brien were thanked by committee members for attending and for their invaluable contribution to the hearing on the Bill.