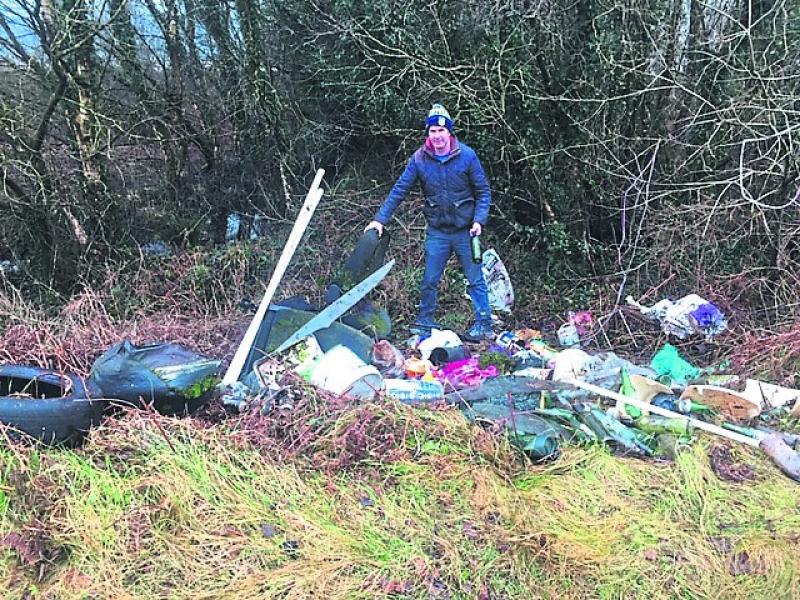 Pictured is Michael O'Meara with some of the illegal refuse being dumped on the much-loved beauty spot between Rathcabbin and Portumna, Redwood Bog.

The National Parks and Wildlife Service is to erect a barrier preventing cars accessing Redwood Bog following a series of complaints about illegal dumping at the beauty site.

Redwood Bog is a very large site which is much-loved by many locals and spans the border between Offaly and Tipperary.

It's a site of national importance and has SAC (Special Area of Conservation) and NHA (Natural Heritage Area) status conferred on it.

Illegal dumping has been a problem in the beauty spot for many years but it has considerably worsened during the Pandemic.
Cllr Michael O'Meara told a recent meeting of Nenagh Municipal District that he has received many complaints about the problem.

"There is so much illegal waste there now that you could fill at least an artic lorry with it."

The councillor said there's every type of waste there including builder's rubble, fridges, washing machines, galvanised iron, and black bags. He estimated that 80% of the refuse could be recycled.

"I have been in contact with the environment and roads sections of the County Council," he continued, "and, using funding from the Clean Up Initiative Fund, they are going to remove the rubbish in the next few weeks."

The councillor said perhaps one of the reasons the problem worsened during Covid was because people had more time on their hands and used that time to clean out rubbish that had been lying around for a long period in their garages or elsewhere on their properties.

He added that people are giving their rubbish to "unscrupulous operators" who are often using vans and who charge a lower amount of money for the "service" than the waste companies or the recycling centres.

"Redwood is a very large and greatly-loved bog," commented Cllr O'Meara. "A lot of the locals love walking on it. It's very popular with walkers. A lot of locals are horrified by the illegal dumping going on there. They have cleaned away the rubbish on a number of occasions in recent months."

The councillor said the NPWS have told him they will erect a barrier at the road leading into the bog in the next few weeks in order to stop people with illegal waste driving onto the site. He said this won't affect pedestrian access and people will still be able to walk in the area and enjoy its beauty.

The bog was acquired from Bord na Móna some years ago by the NPWS for conservation purposes. It is a raised bog that developed on the southern margin of the Little Brosna flood plain at its confluence with the Shannon.

It forms part of the Little Brosna Callows Area of Scientific Interest, which is of international importance as a wildfowl habitat and as a classical example of a flood plain ecosystem. The reserve includes the last relatively intact bog dome on the flood plain margin as well as a dried out portion of another dome and an area of fen. The intact dome has a typical raised bog flora and in the centre it retains quaking areas and numerous bog pools.