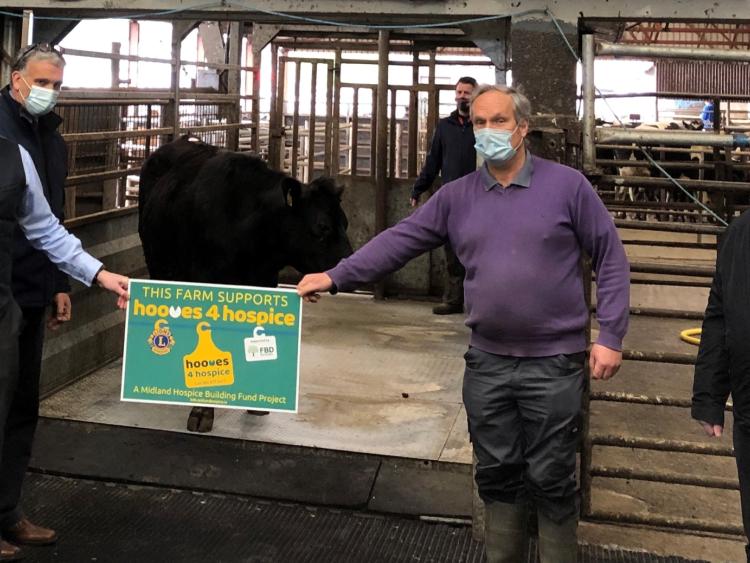 An Aberdeen Angus bullock was sold at the Birr Mart to raise funds for the Hooves4Hospice project.

The animal was kindly reared and donated by Mr. Dan Cleary from Maclone, Shinrone, and fetched the handsome sum of €1,180 at Birr Mart on Monday, April 19 in aid of the building of a Regional Hospice to provide specialist end of life care and support for people in the four midland counties, Laois, Offaly, Longford and Westmeath.

Lions Clubs in the Midlands launched the Hooves4Hospice Project in in January 2020. The project involves recruiting a large number of farmers from across the midlands willing to rear an animal. There has been huge levels of interest and participation from local farmers and farm organisations.

The first animal donated to Hooves4Hospice was registered in February 2020. A year later the number of registered animals has grown to 460.  To date, 29 ready-for-sale animals have been sold and realised a total of €39,374 or an average of €1,358 each.

Participating farmers are identified by the distinctive “Hooves4Hospice” sign on their farm gates. Many such signs have gone up all over the four counties. A number of local schools have also come on board to sponsor a calf or support the project in any way they can. Banagher College are holding a draw in aid of H4H with first prize of an Angus Cross calf worth €300 donated by Martin Finnerty. The draw goes live on iDonate.ie 26 April.

Members of the public are also invited to make donations to the project. Farmers interested in knowing more about the project and perhaps getting involved can talk to any member of their local Lions Club or contact H4H directly at 085 8775477 or email to h4h@midlandhospice.ie  For further information Google “H4H Midlands Hospice”.