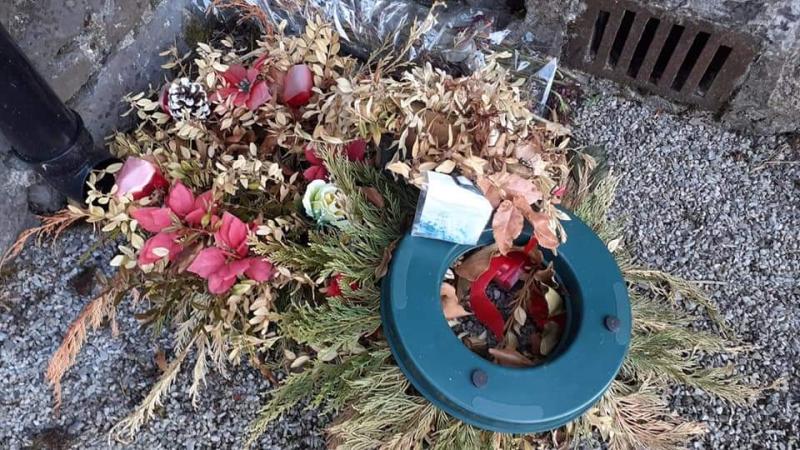 Pictured is rubbish left behind in Clonoghill cemetery recently

Illegal dumping in our cemeteries is a significant problem at the moment and councillors have condemned it as being “awful” and betraying “a narrow mindset”.

Cllr John Leahy told last week's meeting of Birr Municipal District that CCTV cameras will have to be introduced in some graveyards to tackle the problem. “It's been very upsetting to hear about the rubbish dumping in local graveyards over recent weeks,” he said.

Mary Hussey, of the Environment section in the County Council, told the Councillors that Area Engineer John Mitchell is working on installing CCTV cameras in Clonoghill cemetery in Birr, where there have been a lot of complaints in recent weeks. Cllr Leahy said all the councillors would be very happy to hear that because it has been a big issue and the councillors have been getting a lot of complaints from the public.

Cllr Peter Ormond pointed out that there's a problem with rubbish in Shinrone cemetery. “The caretaker there has told me on a number of occasions that there's an issue with inconsiderate rubbish dumping. He points out that people are dumping their withered flowers and wreaths at the entrance. They should be taking them away with them.”

Cllr John Clendennen commented that the rubbish dumping in Clonoghill over the course of last weekend “was awful. It was appalling. It really is a low point, and a sad indictment of people's behaviour, that we are going to have to introduce CCTVs in cemeteries.” He talked about the “See it say it” app which allows people to immediately publicise illegal dumping when they see it.

Cllr John Carroll agreed with Cllr Clendennen, that it's a sad day when the Council has to introduce CCTVs. He said the mindset of some people is baffling and narrow. “They look after their own grave plot very well but see no problem with dumping their rubbish in other parts of the cemetery or over the wall into someone's land.”

Mary Hussey added that unfortunately Cemetery Sunday couldn't take place last year because of Covid-19. On Cemetery Sunday parishioners clean and decorate graves. “Because Cemetery Sunday didn't take place we are offering communities grants. We have a total of €21,000 to offer. It will assist communities in the maintenance of their cemeteries.” She said it was a “terrible indictment” of people's behaviour that they don't remove their rubbish from the graveyards. She said CCTV has proven a successful deterrent in other graveyards. She wondered if installing a compost bin in cemeteries might help the issue. She agreed with Cllr Dooley that dumping two or three black refuse sacks in drains should come under the Waste Management Act.

Stephane Duclot, Director of Services, said this is a difficult issue in general, and he commended the hard work of the Environment Section.