The weekend weather forecast for Ireland from Met Eireann is for cloud and rain to gradually extend from the Atlantic over the weekend, but accumulations will be fairly minimal in the east and southeast.

The weather forecast for Ireland for Friday from Met Eireann says that mist and fog patches will clear early on Friday morning to leave another mostly dry day with spells of hazy sunshine. It will be cloudier over the western half of the country with rain or drizzle at times, mainly in the west and northwest. Highest temperatures of 8 to 12 degrees in light to moderate southerly winds, fresh at times on Atlantic coasts.

Most areas will be dry on Friday night under broken cloud. Some pockets of mist and fog will form in the mainly light to moderate southeast breezes. Some patchy rain and drizzle may develop in the Atlantic coastal fringes towards morning, accompanied by freshening southeasterly winds. Lows of 1 to 4 degrees, but a few degrees higher near Atlantic coasts.

The weather forecast for Ireland for Saturday from Met Eireann is for a mostly dry day for the bulk of the country with increasing cloud amounts. The best of the sunshine will be over the eastern half of the country through the morning. Outbreaks of rain and drizzle will start to push into Atlantic counties by the afternoon, however, edging slowly eastwards over the country during the evening. Highest temperatures of 9 to 12 degrees, in light to moderate southerly breezes, fresh at times near Atlantic coasts.

Mostly cloudy with patchy outbreaks of rain and drizzle on Saturday night in light to moderate southerly breezes, fresh at times near Atlantic coasts. Lowest temperatures ranging 5 to 8 degrees.

Our Atlantic chart shows precipitation and pressure forecast in 6 hour intervals for the next 10 dayshttps://t.co/9Giuj4CR5m
The national forecast and the outlook for the coming days available here: https://t.co/9gKN6SVok4 pic.twitter.com/bs33O7hsXi

According to Met Eireann, Sunday will be generally cloudy with outbreaks of rain and drizzle, with patchy mist and some hill and coastal fog. The rain will be at its most persistent in the west and northwest, with drier intervals and perhaps some brief sunny spells occurring in the south and east. Highs of 9 to 12 degrees in light to moderate southerly breezes, fresh at times near some coasts.

Mostly cloudy with outbreaks of rain and drizzle on Sunday night. Mist patches too, with hill and coastal fog. Lows of 6 to 8 degrees in light to moderate southerly breezes. 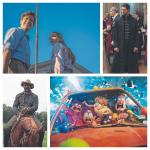 What's new on Netflix this April?

A new month means a new batch of releases from Netflix, take a look at the movies and TV shows coming to your screens this month...
ADVERTISEMENT - CONTINUE READING BELOW