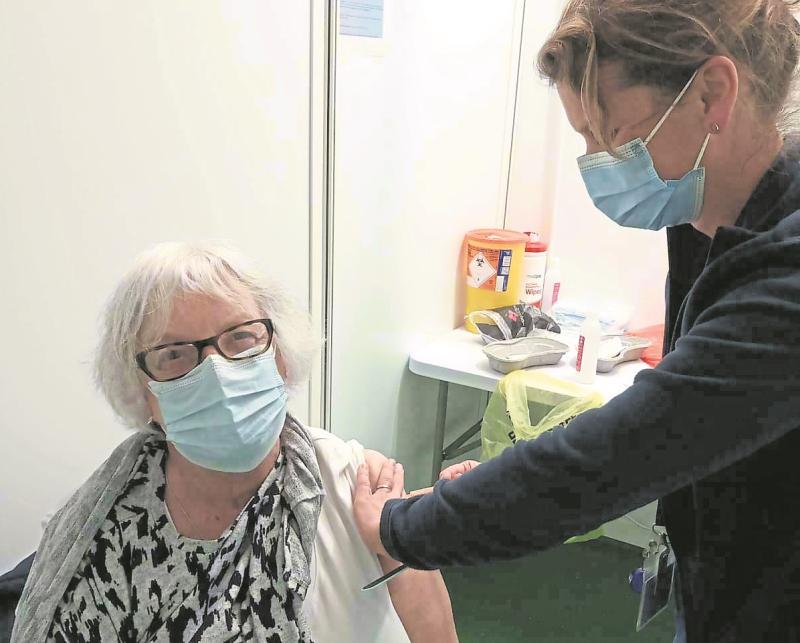 Rose Mannion, originally from Cloghan and now living in Lorrha, was admitted to Portiuncula University Hospital, Ballinasloe just over 12 months ago on March 28, 2020, gravely ill with Covid-19.

Rose spent a total of 81 days in the intensive care unit between Portiuncula hospital and University Hospital Galway, much of that time in an induced coma and attached to a ventilator. She was discharged from hospital in July and has since continued her rehabilitation.

Recently, Rose received her first dose of AstraZeneca vaccine at the vaccination centre at Ballybrit Racecourse, Galway, almost 12 months to the day she was admitted to hospital.

Speaking to the 'Tribune', Rose said she was delighted to have been called for the first dose of vaccine. She received the text to attend on March 15. However, her initial appointment was cancelled due to the blood clotting issues that arose and it was later rescheduled for March 23.

“I have to say I was rather nervous and reluctant despite my consultant's assurances that it was safe to have the vaccine. However, as I couldn't pick and choose what vaccine I could have opted for, and the only choice open to me was yes or no, I decided to go with it,” she explained.

“There were side effects though which luckily enough I was told could happen like tiredness, muscle pain, vomiting, headache, temperature and general flu-like symptoms. It took 28 hours before it all kicked in just when I thought I was fine. This lasted for just over three days, but sure that’s a small price to pay compared to contracting Covid again I can assure you.”

Rose's family were absolutely delighted that she has received the vaccine and were very supportive and encouraging that she take it.

“I must say we all view it as a step in the right direction. It wasn’t just me, who suffered when I contracted the virus last year, but my family did too not knowing what news they were going to get every time the phone rang and then not being able to visit me in hospital was an added strain on them.

"Who would have thought this time last year that a virus would claim the lives of so many people around the world and bring us all to our knees? This time last year I was on a ventilator and in an induced coma which lasted for over two months. Nobody wants something like that to happen to them so I sincerely hope that everyone takes the vaccine. I do realise there are people who will be reluctant to take it and that’s understandable, but I would hate to see anyone with bad Covid like what I had.”

Speaking about her recovery, Rose said it has been “painfully slow, unfortunately” and has left her with some health issues and that itself is not only “worrying going forward but also very difficult to cope with”.

“My consultant was hoping that given six to twelve month’s that I would be back to normal again and tearing around the place like what I was doing, but to be honest, I seriously doubt at this stage that I will ever get back to the same level of energy and physical strength that I enjoyed prior to Covid.

" I do of course realise that I’m lucky to be alive given that I came so, so close to death. With the nature of this virus, the medical people are learning something new about it every day, but they still don’t know enough about it to be able to assure patients of the future, so no one can tell what this virus will throw up in people in months or years to come, and that’s frightening when you’re told that.”

Rose is currently participating in a research study on the role of immune dysfunction in sepsis and Covid-19 at Galway University Hospital where she spent some time during her illness. The study is spearheaded by Professor John Laffey and Dr Bairbre McNicholas, both ICU doctors in the hospital, who had attended to her while she was there.

The purpose of this study is to gain a better understanding of how the immune and musculoskeletal system affects recovery following sepsis and for changes that occur in muscle in response to sepsis and Covid-19 infection. They will examine the patients' blood samples and analyze the immune cells and learn how these cells change in response to sepsis. They are also looking at proteins, RNA and DNA in the blood as a measure of the patient's immune or muscle response to infection.

“This is all very interesting and no doubt it will be of huge importance in helping the medical people understand a little bit more of the after-effects of this terrible deadly virus so I’m delighted to be part of the study,” Rose added.