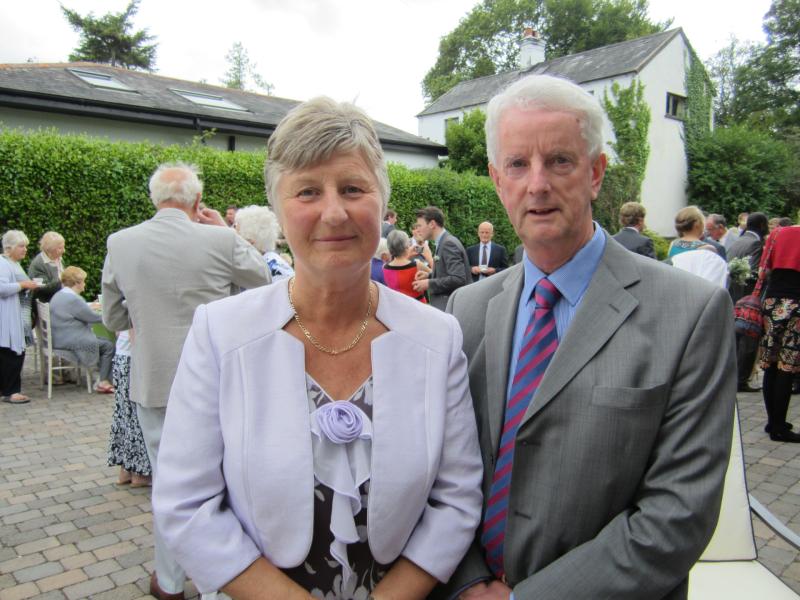 A cancer survivor with family ties to Kinnitty has begun a 75 km walking challenge to raise funds for charity, just four months after surgery for malignant lesions that made sitting and walking unbearably painful.

Suzanne Shepherd (73) was diagnosed with cancer in late June 2020. She received urgent surgery in August and again in November, spending a total of 31 nights in hospital. Now she is celebrating her recovery with a week-long walking challenge on the roads around her east Belfast home to raise funds for her favourite charity, Christian Aid Ireland.

Suzanne’s late father John Ardill was born and raised on a farm near Kinnitty and during her childhood, she spent her summer holidays there. Until the coronavirus pandemic struck, she was making an annual visit to stay with cousins in Kinnitty and Birr, and her affection for her father’s homeplace is clear.

“Kinnitty is my second home. My twin sister Moyra and I had wonderful, blissful summer holidays there. I remember helping to save the hay and bringing tea in enamel cans to the men working in the fields.”

Suzanne hopes to return to Kinnitty as soon as restrictions allow but for now she is focused on her recovery and this week’s walking challenge. She expressed her gratitude for the medical and nursing care she received in hospital, particularly at a time when health service resources were focused on the coronavirus pandemic:

“I feel very lucky to have received my surgery because I know that many patients had their operations cancelled because of coronavirus. And although it was a shock to find out I had cancer, I’m so thankful that the operations have taken away the pain I’d suffered which had become quite unbearable.”

Suzanne is one of Christian Aid’s most dedicated supporters. Her fundraising over many years has raised thousands and until lockdown last March, she was also volunteering weekly in the charity’s Belfast office. Christian Aid Ireland Chief Executive Rosamond Bennett praised Suzanne’s stoicism and generosity:

“Suzanne is a truly exceptional lady, always cheerful, thankful and focused on the needs of others. Like so many of our most dedicated supporters, Suzanne shows great love and compassion for the suffering of others even when facing difficulties in her own life.”

Despite last year’s health scare, Suzanne explains that the greatest sorrow of her life came in 2013. She and her husband Derek were on a flight returning from a once-in-a-lifetime holiday to New Zealand when he became unwell, collapsed and died.

Eight years on, it’s a loss that Suzanne is still coming to terms with but it hasn’t diminished her appetite for charity work. And Christian Aid isn’t the only good cause to benefit from her generosity. Suzanne spent 50 years as a volunteer leader with Girlguiding Ulster and twenty years fundraising for Marie Curie. Her charity work even earned her an award in the Queen’s Birthday Honours List 2013.

This week’s walk around the roads of east Belfast - one kilometre for each year since Christian Aid was founded 75 years ago - is Suzanne’s gesture of solidarity with the many women in developing countries who set off each day on long and often dangerous journeys on foot. Climate change has brought drought to countries such as Kenya and Ethiopia, and women are having to walk further than ever in search of water for their families and livestock.

Suzanne’s challenge was inspired by Rose Jonathan (68) who lives in Dili village in the Kitui region of Kenya. During the dry season, Rose walks for seven hours a day to collect water for herself and her family - the six grandchildren she cares for alone since her husband died and her daughters moved to the city for work. Suzanne explained why Rose’s story touched her particularly:

“Rose and I are of a similar age and we have both been widowed. But where I am choosing to walk, and I’m grateful I’m well enough to take on this challenge, Rose has no option but to walk for miles every day in search of water.”

Elsewhere in Kenya, Christian Aid has built a sand dam (a low-tech water source) for Florence Muthiani and her community, just a short distance from her village. With easy access to water, Florence has been able to grow fruit and vegetables to feed her family and surplus to sell for cash.  She also manages 10 beehives and sells the honey for cash at the market.

Before the water source was built, Florence would spend 8 hours a day collecting water but now she has time to develop her farm business. She has a cow, a donkey, two turkeys as well as some goats and sheep. Florence told us: “I am very happy now. I have strength and power. I have learned to depend on myself.”