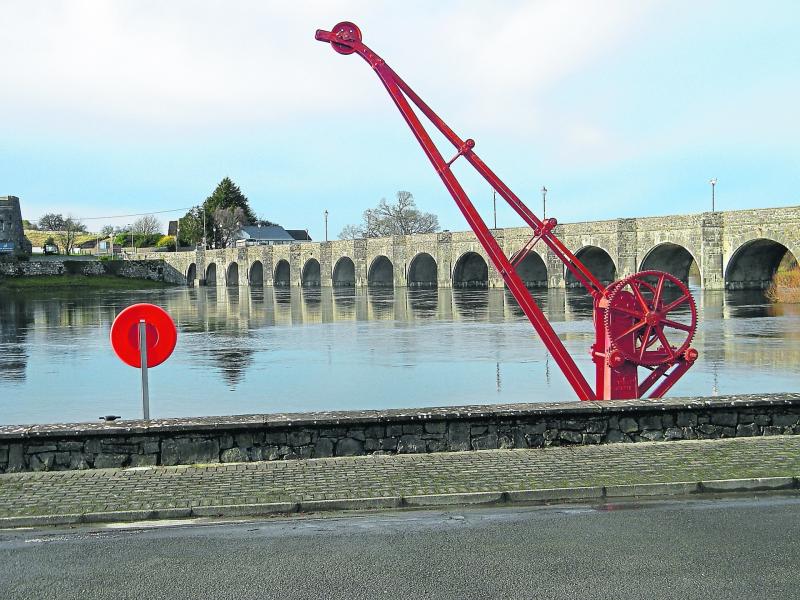 A new development strategy identifying four key pillars as the vision of the future of Shannonbridge was published recently.

For many years, Shannonbridge was the home to a peat fire power station and, in many ways, this facility and the peat extraction activities, which were needed to provide its fuel supply defined the principal function and employment base for the village.

Following the decision to cease peat production on the nearby peatlands and to wind down the generating function of the power station, the need arose for the re-imagining of the community and the identification of activities replacing those associated with the peat extraction and electricity generation rather than as additions to them.

The discontinuation of such a major source of employment and economic activity will have a huge impact on the area and it's not likely that new activities of a similar nature and scale can be established given the location of Shannonbridge and its infrastructure. However, the community of Shannonbridge has set about a process of reimaging a community post electrical generation and peat extraction by publishing a ten development strategy for Shannonbridge.

Speaking to the 'Tribune' recently, Sile Ryan of the Shannonbridge Action Group, said the volunteer group were delighted to launch the plan. “We are looking forward to getting a project management team in place and to seeing the full implementation of this plan,” she enthused.

According to Sile, the first step going forward as part of the plan's implementation is to put in place a project management team, funded by a recent significant allocation under the Just Transition Fund. “And, to start driving forward this long term plan including engaging with key stakeholders and the long term partners, to pull all the different aspects of this plan together,” she explained.

The Shannonbridge Action Group was allocated €405,000 under the JT fund and not only will this fund, putting a project management team in place, it will also go towards the redevelopment of the former school in Shannonbridge as a community facility including carrying out a feasibility study on what can be done with the defunct building, which Sile said as “an absolute eyesore” in the village.

It was a massive blow to the area to see the power station in Shannonbridge close and the cessation of peat harvesting by Bord na Mona but Sile enthused that “we decided as a community that we aren't going to lie down”. “There is massive scope here for Shannonbridge as a tourism location,” she remarked.

Four Key Pillars
With this in mind, four key pillars have been identified as a vision of its future in a recently published development strategy, entitled Shannonbridge Development Strategy (2021 - 2031) for the village. This ambitious project commenced in April 2019 and is aimed at developing a future vision for the community and identifying priority actions as a response to the closure of West Offaly Power and the end of peat harvesting.

There has been widespread consultation across the whole community of Shannonbridge and its hinterland including the carrying out of a survey, the holding of public meetings and the adoption of a strategic report all led by the Shannonbridge Action group with the assistance of Offaly Local Development Community. Ongoing engagement continues with OLDC and Offaly County Council also.

In addition, the ESB, Bord na Mona and Waterways Ireland, the OPW and the NPWS have been engaged with on a regular basis and projects, which might be pursued and discussed. Meetings were also held with Government ministers and local elected members with regards to key elements of the strategy. All of these discussions influenced and underpin the development of this plan.

By providing the principal visitor management centre in Shannonbridge there is both potential and scope for alternative access to Clonmacnoise by a combination of rail, river, greenway and road which fits with the ethos of quiet tourism that befits such an important historical site.

Waterways Ireland Master Plan 2020 acknowledges the importance of Shannonbridge as a critical access point to Clonmacnoise and is scoping an increase in boat mooring facilities which will allow for an increase in river access to the monastic site. The restoration and relocation of the Bog Rail Tour to the Dalton Centre would provide a real focus for tourism in the village.

The Dalton Centre has the scope and size to incorporate an industrial heritage museum along with the bog rail tour. The reinstatement of such a tourism attraction in the community would again have significant economic benefits with a multiplier effect in the larger rural community.

Offaly County Council has fully committed to a Greenway strategy across the County and Shannonbridge is pivotal both in terms of location and the type of visitor experience it can potentially offer. The village is ideally located to be a service and activity centre for all those using these routes and a walking/cycling link through
Shannonbridge would allow for the integration of these major Greenways/Blueways. Blackwater Bog has huge potential to be established as a tourism and community amenity. This type of tourism engages directly with the Hidden Heartlands brand endorsed by Fáilte Ireland, the County Councils and their strategic partners. With the cessation of commercial peat harvesting on Blackwater Bog by Bord na Móna in 2020 the opportunity now presents itself to preserve Blackwater Bog and the numerous SACs located in its environs as a National Park of international importance and to expand its potential as a major tourism destination in Ireland.

Part of the vision for Shannonbridge as a tourism location is to make it and its immediate hinterland a visitor destination of scale in its own right. Private Sector Development would contribute to the development of an integrated peatland experience visitor centre. Where a primary focus is on the development of Shannonbridge as a significant tourism destination; it is envisaged that the knock-on effect of this investment will be the provision of sustainable employment in this sector.

Develop the village as 'attractive place to live and work'
The remaining pillars identified for Shannonbridge focus on the development of the village as an attractive place to live and work, and opportunities for the provision of services and amenities that not only enhance and improve resident’s lives but encourage others to move here. A key component of these pillars is the provision of alternative opportunities, facilities and access to training to encourage the community to upskill and retrain to avail of new opportunities that may arise as a result of the transition and reimagining of Shannonbridge.

The “Destination Shannonbridge” visitor experience offers a very strong base on which to build tourism capacity in the community and in turn employment opportunities.

The type of tourism activity proposed is based on a model of sustainability, of low impact, high value, making use of the uniqueness of the natural resources, history, culture and biodiversity all within a relatively short distance of the village. These are the principal developments that have been identified as strategic priorities under the tourism development part of the vision for Shannonbridge.

By increasing the promotion of tourism in the area, and by providing facilities and activities which will allow tourism to flourish, tourism-related enterprises and jobs will be supported and the down-stream jobs to which such enterprises give rise will also thrive.

Strategy Implementation
Implementation of this strategy will require the support and active participation of a wide range of stakeholders including Bord na Mona, the ESB, Waterways Ireland, OCC, the OPW, the NPWS, OLDC, Failte Ireland as well a contribution from private companies and the general community. It has recommended setting up a strategy implementation steering group to include all of these vital stakeholders as well as others.

This will be done in tandem with appointing a project manager, who can pursue the implementation of the plan and assist in making funding applications and utilising the various funding mechanisms, which have been put in place.
This strategy was written at a particular point in time and responded to the framework of need and opportunity as it existed at that time. However, as time goes on, there will be further opportunities likely to emerge and will be considered carefully in the context of what objectives of the strategy for the area are.